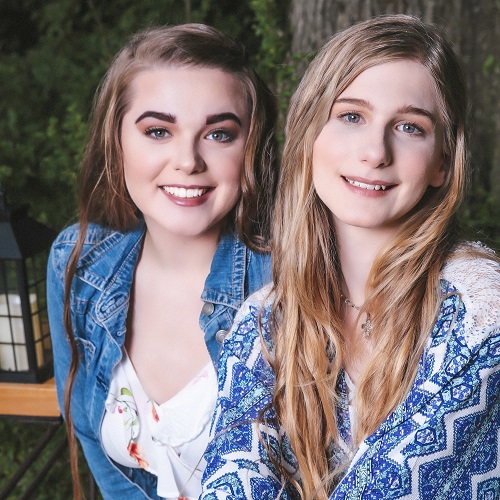 SistersJ will exalt and uplift you with their otherworldly new single “Open When.” SistersJ is made up of real life sisters Elizabeth and Lily Jackson. Elizabeth and Lily have been harmonizing since they were girls and both have been perfecting their musical skills over the years. Music has been a big part of the Jackson sisters life, Elizabeth just received her degree in music education with honors and Lily just graduated salutatorian and placed third in the nation with her vocal solos. It was only a matter of time before Elizabeth and Lily would pursue a career in music together, and the result is astounding. “Open When” is a beautiful single that expertly captures the difficulties of being away from your loved ones. It serves as a sort of pick-me-up for anyone who is feeling weighed down by the weight of love. The single itself is designed to be played when they’re in need of a reminder, making “Open When” dynamic and addictive.

Immediately I am blown away by SistersJ’s vocals, they are both elegant and haunting, staying with you after one listen. There is an church like quality to their vocals that reminds me of Weyes Blood, they share that same transcendent vocal ability with her that moves you instantly. What’s so cool about “Open When” is how much SistersJ lean into their vocals, they don’t rush through the verses, instead they lean into each rhythm change savoring every last note. The production of “Open When” amplifies and celebrates the ethereal nature of SistersJ while raising your spirits with each bar. The accompanying melody is soft and sweet, highlighting the vocals which are front and center on this track. There is a warmth to “Open When” that keeps you coming back for more. It also captures the essence of love effortlessly by acknowledging how hard it can be to not be in the same place as a loved one, something we’ve all experienced.

What I like so much about “Open When” is its perspective. SistersJ take the position of talking to their loved one who is struggling because they’re not around each other. This allows a story to unfold, a lesson, and a nurturing feeling to root into you. The lyrics support this perspective by encouraging the listener to play this song when they need to be reminded of love or are in need of feeling better. One of my favorite lyrics is, “I wrote you a letter for everyday we’ve been together/Open each one when you think of me.” This is the sentiment of “Open When,” to reunite yourself with the part of you that feels like its missing. While the song addresses someone who is having a hard time, it never feels solemn or hopeless. Instead it encourages feelings of light and love, it offers the heart a remedy, and it gives you stunning song to return to whenever you need it. There is an inherent power to “Open When” that makes it an essential on my summer playlist.

While “Open When” talks about a romantic relationship, it easily can be applied to family  dynamics and friendships. SistersJ masterfully created a song that has universal reach. The versatility of this track allows it to have a highly personal effect on listeners. There is timeless wisdom woven through “Open When” that elevates it past your regular single, SistersJ are really making their mark with this track. I haven’t heard any music quite like “Open When” before but it has a timeless feeling to it that makes it all the more captivating. I can see nothing but a bright and innovative future for SistersJ, their unique sound transforms and stays with you. It can soothe a struggling soul from the moment you har SistersJ harmonize.

With clever insights, beautifully arranged music, and vocals that will transport you to a higher dimension, “Open When” is a single you don’t want to miss. SistersJ are carving a spot for themselves in the industry with “Open When.” Its hard to believe this is their first single with  SisterJ’s evident prowess and natural talent. I cannot wait to see where SistersJ take their sound! If you’ve been missing someone or are trying to survive distance for the first time then “Open When” is the single you’ve been waiting for. Listen to it now!