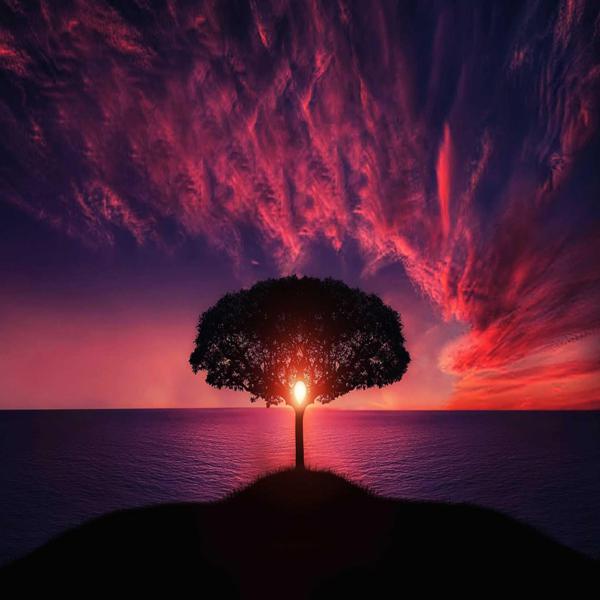 Simone Roncoletta’s “The Tree of Life”

Italian-born singer/songwriter and performer Simone Roncoletta’s “The Tree of Life” stays close to Roncoletta’s guiding artistic impulses. His reading of authors as diverse as Primo Levi, Edgar Allen Poe, and Jack London, among others, informs his work. The strong poetic slant of his lyrics is one of the chief strengths of the song. Roncoletta achieves an impressive cumulative effect from the piling on of images that push “The Tree of Life” forward and he has no difficulty enunciating the song’s important imagery. It’s written in a surrealistic roll tumbling from one image into the next with a coherent non-linear thread tying it together.

He pairs it with a classic rock sound. The guitar work, in particular, is stellar and strikes a striding and confident note that helps reinforce the song’s poetry. It is relentlessly musical. The changes are never wearily predictable; there’s an inspired lift that sweeps listeners from one passage to the next without any jarring connections. Early passages in the song are much more plaintive than those following it and those portions of the track are effective for setting the stage for everything after.

The emotion he incorporates into his singing is another key. English is not his first language, but he wraps himself around the unfamiliar turns of phrases with conviction that transcends such boundaries. The vocal melody has a long winding quality that’s hypnotic without ever striking a dreary note. It’s clear Roncoletta worked hard to realize this song, but it does not sound like the product of heavy labor. The naturalness emanating from this song is a big part of its success.

Pastoral imagery is rife throughout the song. The specificity of his imagery connecting with the natural world is one of the most attractive elements of Roncoletta’s songwriting in this instance. There’s no overwriting present throughout the song, another rebuttal to anyone who reads self-indulgence into his work, and the recurring themes and images arising from the text never fail to hold the listener’s interest.

It does not overextend its welcome with listeners. Roncoletta’s sturdy sense of songwriting aesthetics doesn’t slacken during the course of this song, and he has a canny instinct for how to tailor a song for maximum effect. It helps gives an accessible tilt to a song that might otherwise fly over the heads of casual listeners on an initial listen. Simone Ronocoletta’s prolific output is indicative of his passion every bit as much as his skill. He’s carving a path into the global consciousness rather than limiting himself and the world is ready for a talented artist such as this.

His DIY production aesthetic is another strength. He maintains an even-handed balance between the instruments with an emphasis on the vocals; it really highlights the intimacy he is capable of as a performer. It’s the crowning achievement of an intensely personal yet universal song that likely scratches the surface of Simone Roncoletta’s prodigious skills. It will be wildly entertaining to see where he moves on with his future work.