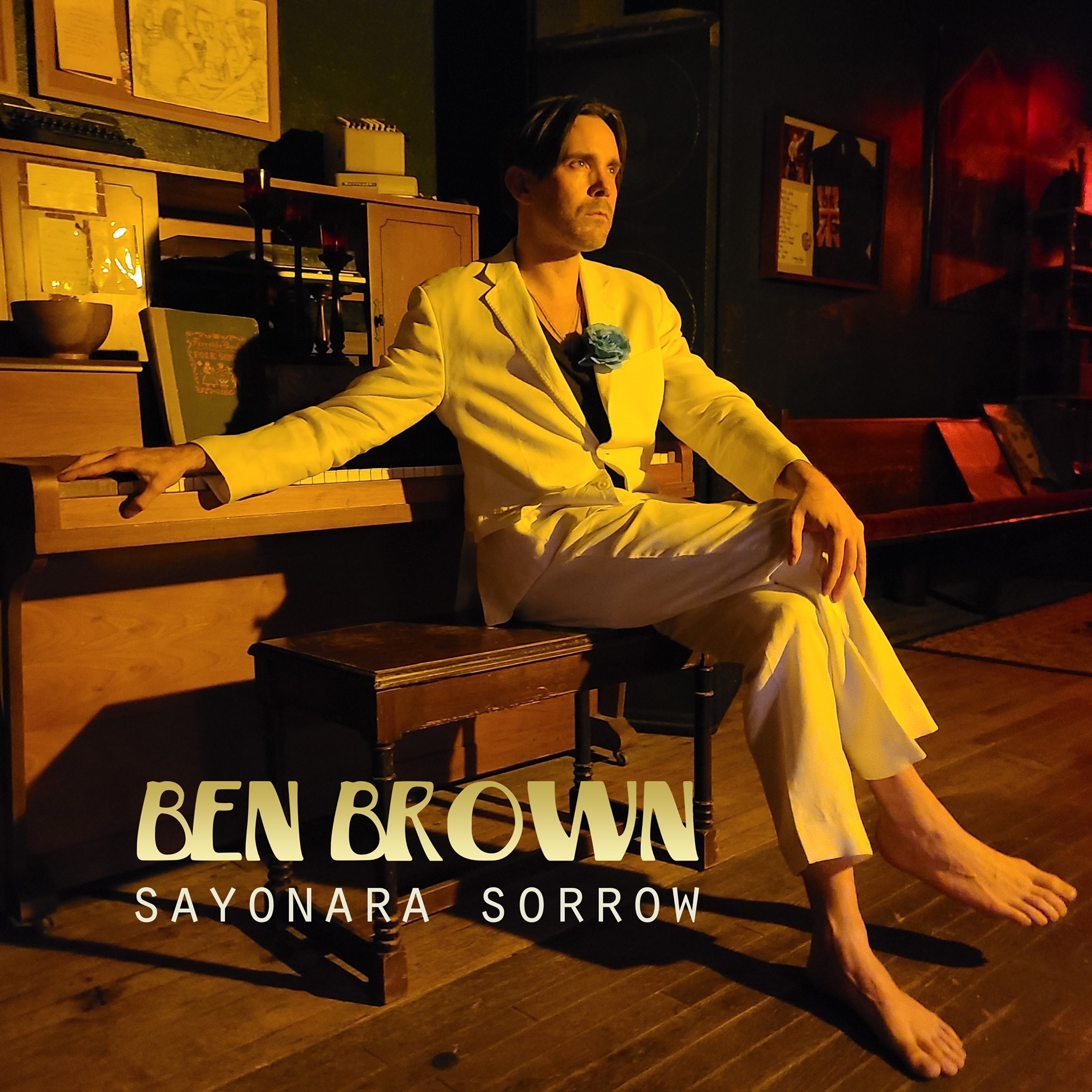 Behind closed doors, or emerging from our own personal barriers, it isn’t any wonder that artists and musicians can capture the emotional thrill ride (or terror ride) of human existence. Pack on the pandemic of the last year and the human psyche has been through a juggernaut of ups and downs. Ben Brown’s Sayonara Sorrow is a brilliant sonic blend of jazz, Americana, pop and masterful songwriting. From the opening stunner “Get Lost” to the grand “The Love That Made The World” and to the eclectic “There’s Always Tomorrow”, Brown’s vulnerability and interesting observational prose makes its way closer and closer into the listener’s heart.

Sayonara Sorrow is produced by Mick Flowers and features Time Cappello (Tina Turner/ The Lost Boys). Brown, a veteran of No Show Ponies and The Savage Poor has also worked with Dave Bielanko and Christine Smith of Marah, Kevin Russell of Shinyribs, Ramsay Midwood and Shawn Sahm of Texas Tornados. Even if you don’t have a sense of Brown’s musical pallet going into Sayonara Sorrow, by the album’s end, you have a solid interpretation that he not only asks universal questions, his dreams and his inspirations feel grounded and real.

“Get Lost” has a hauntingly beautiful patina. A melodic guitar drives right through the center of the song, much like the constant percussion underneath. The only way you can be found, Brown sings. His voice reminds me a lot of Brandon Flowers (The Killers) but in other songs he brings audacity and mystery like Rufus Wainright. The swarming harmonies that bubble underneath his voice are powerful stuff. I loved the way this song starts out the journey and has wonderful movement.

“What Will Happen to All The Beauty” has a rubbery, synth tone. I closed my eyes and imagined this song as the soundtrack to a societal undoing. Brown transported me to a world where all the good, all the beauty in the world is trampled by hate and bigotry. The horn section is muffled, peaking out like flowers itching to get out of their planters. Then, about mid song, the horns come alive, almost as if they were awakened from their slumber or hibernation. A sleepy sax ends the song. I loved the dramatism and the way that Brown connects his listener to each of his words but creates a scenery all to its own with the musical bedrocks.

From there, “Outside” (Brown ends the album with “Outside” (Reprise), too), is also a very strong track. When he sings “something waiting for me” it’s like the listener is taking in his declaration. I pictured him writing those words from inside a disheveled room and he’s yearning to be a part of the world and moving past his demons. In “Long, Long Way From Home” he sings “I couldn’t love you in the way you wanted to be”, as a nocturnal-nighttime saxophone muses. He doesn’t overdo the sax.

In “I’m Afraid of the Dark”, the steady stream of acoustic guitar is once again backed by the soaring, savory harmonies. I felt like this song was almost hymnlike – like witnessing a moment around a campfire. It’s intimate. “When Fear Disappears” the vibe changes again, a quicker tempo. It’s almost rockabilly like. I loved Brown’s voice before, but when “When Fear Disappears” hits, my love exploded. All the songs on the album are exceptional, but if I had to pick one – this is it. Just follow your heart or you’ll surely come apart, Brown sings. In the rearview, that’s when fear disappears. That struck me more than anything – push forward and leave the past behind.

The last few tracks, “The Love That Made The World” (think Elton John’s “Sad Songs (That Say So Much”), “I Can’t Afford My Baby Anymore” (a reminder that even the ones we love can take away our emotional wages) and “There’s Always Tomorrow” cement Brown’s playful artistry and ability to connect with his listener.