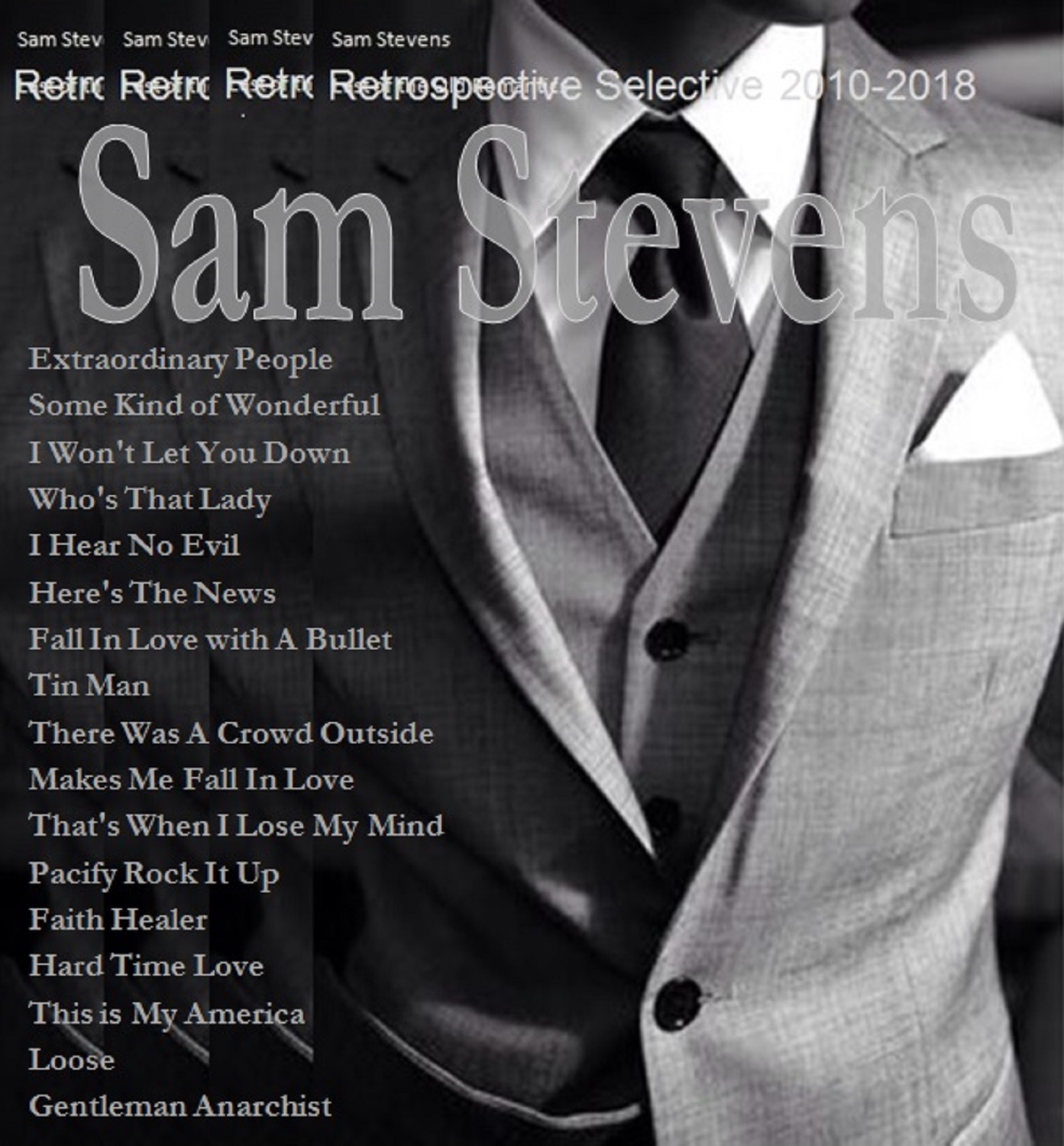 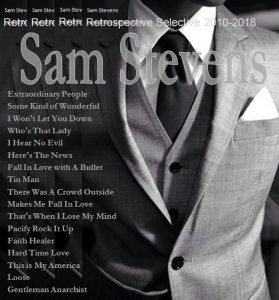 As some take endless inane photographs to document their lives, others commit theirs to film, others write incessantly & passionately in a padlocked diary. All of these art forms creating a 2 dimensional representation of who they are. Musicians, good musicians, tell their stories through the 4 dimensional medium of music. Music of height breadth, depth and of infinite time and space. So creates Sam Stevens.
As a prolific talent with some 150 completed songs locked away in a Prince style ‘vault’ and a creative talent that turns out incredible quality of new material almost daily, I asked Sam why a ‘retrospective’ album and why now?
“A writer is compelled to write, It’s their essence, it’s also a madness, but more than anything it’s comforting even when writing something raucous and insane. It’s an essential madness as it exorcises thoughts & feelings, makes them real, beauty, lust, tragedy and the thrills and spills of life. But what do you do when you’ve finished the particular piece you’re working on? Some never see the light of day, hence I thought i’d release little snippets of pivotal times over the past 8 years. The hope is that this will give anyone listening to the new stuff, a backdrop and context for the new ideas”
The life and times of this artist are displayed by painting waves of emotion on a musical canvass. This compelling collection of a strange musical affair that help us gain an insight into what drives one of music’s most emphatic and prolific talents.

With recent releases of a what the press call a ‘romantic pop’ genre recording superstar Sam Stevens, who has recently released a new album entitled ‘Sam Stevens Retro Retrospective 2010-2018, we are offered a 17 track visionary journey and 10 year musical autobiographical gaze into the artist’s heart, mind, and soul. From conjuring and evacuating his demons, to evoking the true heartfelt expressions of joy and love, the very essence and spirit of Sam Stevens is captured within his music.

Apart from the humanistic quest of an artist, ‘Retrospective Selective’ allows music history, current relevance and dramatic stories to be unveiled.
“I’m not scared or intimidated by writing and so find it simple to immerse myself in a feeling, it’s like method acting but in musical form, both writing and performing a new piece. I think this is why my music is so eclectic, it’s purely because i have so many random emotions that guide what i do at a moment’s notice.. drives my friends & family absolutely batty”
Stevens who’s musical fashion and style has frequently been compared to artists including: David Bowie, Prince, George Michael, Duran Duran, and even Brian Ferry, shares a constant reinvention of himself in each and every eclectic track. His sultry and opulent vocals draw his fanatics into a hypnotic trance, rendering them dazzled and mesmerized and hopelessly addicted.
” The song HAS to be King, the message the feeling has to lead anything else however on one song i did overdo it”.
How so?
” In all seriousness ‘Tin Man’ nearly didn’t get recorded as i kept breaking down in tears during the vocal recording. It was so personal, like a heartbreaking film of my marriage that was falling apart in slow motion. I felt completely exposed and vulnerable. I recall for the very first time saying to myself, why the hell would you do that?. But it was cathartic. I completely lost it in the studio and was saved by producer Chris Porter who took a week to wash the snot out of his jumper”

Raised in Borehamwood Hertfordshire and currently living both in leafy Nottingham in the UK and Long Island New York, Stevens grew up blessed by the 80’s, influenced by Bowie, captivated by Prince and celebrated moments with the likes of Boy George and Culture Club, Philip Salon and Spandau Ballet. A multi faceted diamond in the music industry, he’s played on stage with Prince, did guitar sessions for the likes of Jamiroquai and performed with artists including Devo and Randy Jones of The Village People. He has recently toured London and New York, and played in front of thousands at a Kylie Minogue led New York Pride spectacular.

Suavely branded The James Bond of the Music World, Stevens has already released several ‘pop’ singles this year including: “Don’t Cry”, a whimsically formatted romantic piece, “My Kind of Crazy” an epic and vibrant track filled with the sparks of love as well as the rhapsodic and explosive romance of “Grand Illusion”, a powerful intriguing ,spy filled, musical composition. These topped with the Reggae infused masterpiece “Tonight”, and the beautifully sexual “Obsession”, a tantalizing, orgasmic soundscape of love and lust.
As these singles are currently all out and available on digital platforms why did he feel it important to release an album of legacy works?
” I am so excited about 2019. I feel I’ve finally found an essence to what i want to do and have written a complete new live set for next year. The only problem with that is that unless I release some of the legacy material NOW, they’ll probably never see the light of day as I’m locked into the new set, live show etc etc. I didn’t want these tracks to be forgotten as i love each and every one of them like naughty errant little children. They need to be let out to see what damage they can do ..lol ”

Individually the tracks on “Sam Stevens Retrospective Selective 2010-2018 confess their own tales whilst evoking a unique sensibility. Stevens musically allowed us into his private expressions while offering clarification and interpretation of his sophisticated ballads, raging rock n roll gems, dazzling punk suggestions, and dignified pop representations…..
Give us an insight into what we’ll be hearing:
” I’ll start with ‘Extraordinary People’ written for 2 friends Jason & Matt who survived abuse and castigation, beatings and knife attacks in the UK simply for being Gay and being in love. Their stories are compelling and so i wrote this to say ‘we’re so proud that you came through together’. They are still very much in love”
As a span of 8 years of creation did you find your musical identity changed and why ?
” musical identity ..lol .. i don’t think I have one of those. I’m VERY random. The searing Punk Rock of ‘Gentleman Anarchist to my favourite track the beautiful ‘Some kind of wonderful’. Both of these were written in part the very same day.

I went from Maniacal Rock posturing to literally painting with waves of musical emotion. I love that track so much. I react immediately to a feeling so I’ve no idea what’s gonna come out next. I have my lilting piano days, my R&B/ funk days, My Led Zep days, my Prodigy and Punk days. I’m all that stuff mixed in a big bowl waiting to be called on”
So how does this collection differ from what we’ll be seeing on stage next year?
“There are still elements of the power of ‘Fall In Love With a Bullet’ , ‘Here’s The News’ and ‘I Hear No Evil’, all recorded in the paradise of Karma studios in Thailand, but it’s now far more emphatic and written and built specifically for the live show”

How do you mean ?

” I’ve written the new set specifically for 2019 imagining what I’d look like on stage, imagining how the audience would respond. That’s not to say that my cover of ‘Who’s that Lady or ‘Faith Healer’ on this album aren’t great, but as they were recorded years apart and are completely different aspects of musically who i am”
So the songs on the album are like individuals?
“Yeah i suppose so. Sounds real soft but they’re like my children. Some day you gotta give ’em bus money & set ’em free….lol ”
So an eclectic mix shining a spotlight onto who you’ve been for 8 years?
” couldn’t have said it better myself”