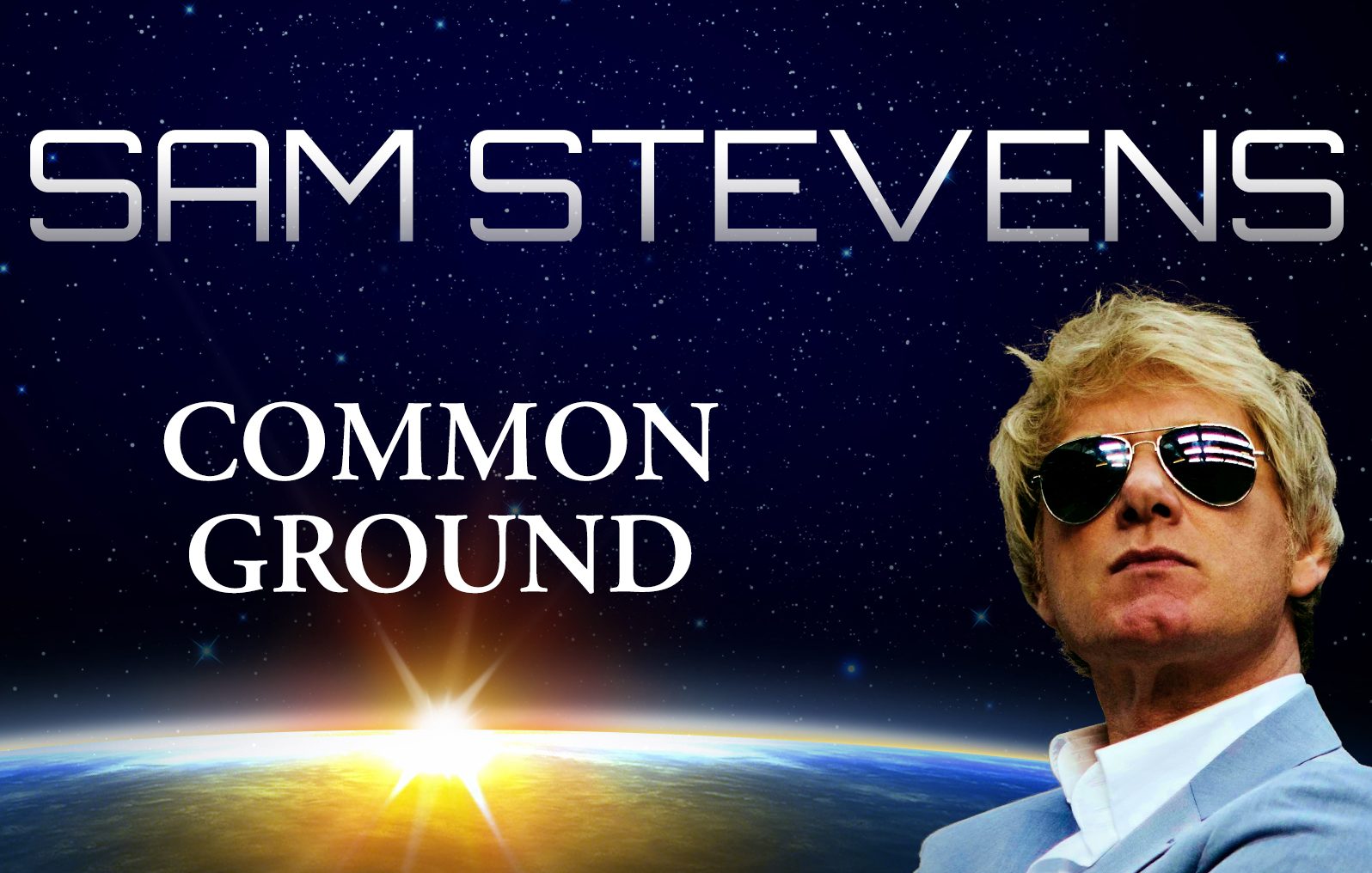 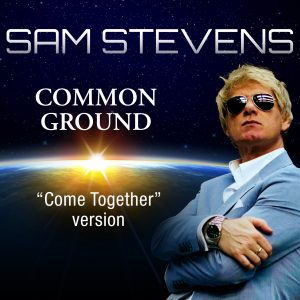 “Common Ground” delivers a relevant and urgent message to the ravaged societal environment currently affecting us all. Straying from his usual romantic climate, Stevens profoundly emphasizes the extreme need for compromise in a world that currently seems lost and dismantled.

This is a song with a message for our Time. It brings us all the suggestion of hope, potentially inviting the entire planet to stand on “Common Ground” in order to survive … together.

Jimmy Star: Your new single “Common Ground” has a powerful message. Please tell me from your point of view, why you feel it’s so relevant today. Take your time and tell me everything!

Sam Stevens: Well, I believe people are inherently good. Regardless of religion, ethnicity, political persuasion, skin color, whatever. We all wish to enjoy our lives. All across the world, we care about our families and friends and hope for reasons to smile every day.

We all know the joy that events like religious and national holidays, weddings, family parties, etc., bring out in us. Even at sad occasions, like a wake for the loss of a friend, people come together to share … sometimes even laughing at a joyous memory of someone we’ve loved.

Stop for one second a mother on the other side of the world from you … sending her youngest child off to school for the very first time. Picture it. Imagine it. She thinks and feels no different than you do. You ARE connected to her as a fellow thinking and feeling human being.

This feeling of shared connection and of mutual understanding is when we as the people of earth are at our best. It’s where we excel, where we share incredible and irresistible joy and sadness with the people we care about. Wherever they happen to be. We’re all essentially the SAME!

Of course, we and our leaders can be corrupted. The temptations of wealth and influence can affect us. The decisions of those in power are capable of making life a hell on earth for many.

Sometimes those in power wish, strategically, to divide us. I’m convinced, however, that we are better than that. I certainly know we’re CAPABLE of being better – our higher selves.

Yes, I admit it: terrible acts have been committed in the name of so-called “justice.” But the natural “want” we all share is to live our lives happy and safe. We have our baser instincts – what Sigmund Freud identified nearly a century ago as our “id”. But we also have the “ego” and “super-ego” that help us aspire to be our better selves.

In the end, as individuals, we’re mere specs of dust in the wind. But together – united in spirit – we can be a powerful force for good and peace for us all.

“Common Ground” begins with the lyrics, “It’s always been our story, starting so long ago, letting things divide us.” Well, I’ll bet a lot of your readers will agree with me: it’s about fucking time we started CHANGING history … by coming together.

To quote from our lyric, “If our differences divide us, then our differences deprive us” and “It’s just a fear of the unknown “. That’s the message. I could rant on about this for eternity, Jimmy! But the bottom line is so simple: we’re BETTER than this. We really are.

Sting wrote quite an emphatic song about world political tensions called “Russians”. It’s main focus was, why would the Russians want to destroy the planet or start a nuclear war if “the Russians love their children too.”

My fellow Englishman had it right. We all have more in common that we might first think or realize. That’s what we need to uncover: our “Common Ground”.

Quoting from the song: “Think about the future, there will be the answer. It’s time we found our common ground.” I so totally, totally believe in that!

JS: How did you come to be involved in the production of the song?

SS: Through my association with the wonderful Eileen Shapiro, I met the
incredibly talented lyricist, Mike Greenly. Mike had a few tracks that
basically needed just a bit more ‘OOMPH!!’

He sent me the original version of ‘Common Ground’ which sounded like Johnny Cash on a sleeping pill. The idea from Mike and Gil was a great start but I just knew it wasn’t there yet. I thought, “F-CK! What the hell am I going to do with this?”

So I lay in a dark room, drank some brandy and thought about it for a few days. I emerged from my cave inspired to strip out the original instrumentation and re-work it, and to add some touches to the lyrics.

Most of that work was done in the kitchen of a TINY house in Crewe in the UK which belonged to my cousin Maria. Several tricky aspects of my own life earlier this year further enable me to FEEL the track and to have passion for it.

My tweaks to the lyrics seemed to naturally fall into place. I took the result to RFL studios in Nottingham with ‘Dave’ and … it came out great!

It was interesting working on a song transatlantically – with Mike Greenly in NYC and me in a sleep shire in England. But between digital file-sharing and running the session over Skype and the phone … it WORKED!

I’m proud of the result.

JS: Do you truly feel that a song like this could possible influence our political climate, or the way in which society views the state of the world?

SS: I could get on my soapbox about “politicians” and the “political climate,” but we’d be here all night! I think it’s been proven time and time again that too many politicians don’t give a flying fuck about the rest of us. About people.

Too many are lost in their own clouds, out of touch with the rest of us. You want to get into office again next year to secure my damn pension? Go right ahead.

All I’m asking is that they STOP – for the love of God, their own grandkids, the people they hold dear or for anything else they treasure – STOP fucking everything up by trying to divide us.

We’re better as ONE people. Even in our separate communities, town, states, countries and nations. We’re one planet and one human race. We are all the SAME!

Politicians might be locked into their mindless little worlds of politics and weapons and economic sanctions, blah-blah-blah. But what about PEOPLE?!

I wish your readers would do this for me: picture an Aboriginal
family in Australia, on dusty plains in their wood frame houses. What do you sincerely think is their most pressing concern?

Political approval ratings? War in the Middle East? Or clothing and feeding their kids? What about an average family in Argentina? The Congo? Poland? Thailand? England? Wisconsin?

We’re ALL just people, regardless of who our politicians may tell us we need to hate. We’re just people. We’re all the same.

So as a long winded answer to your simple question – could a song like this one have some influence? Absolutely, I do! I have infinite faith in the essence of people … that they will get the message. And they may actually work to spread it.

But as long as the Lie Machine is bigger than the Truth Machine in our world … who knows? But we have to speak up. Or in my case, I have to sing!

JS: What are your hopes for this song?

SS: Okay, thanks for letting me vent a little. You’ve just experienced my impassioned default setting!

I’d like to start with the hope that just ONE person … one person to start with … one person I don’t know and have never spoken to … may just really get it and say, “Yeah! We DO have more ‘Common Ground’ than whatever may divide us.”

If our song touches one person, it’s a start. Because that one person can touch others.

This I know in my heart: if we EACH were to take even a tiny step toward thinking about and empathizing with others … locally, nationally and in the world … those small efforts can build a powerful wall against ignorance, division, apartheid and segregation. A wall behind which I KNOW we all can flourish.

This world we now live in feels uncomfortable for just about everyone, doesn’t it. Can’t you sense the anxiety in the daily news? That something doesn’t feel right.

Well, there’s another way. We just have to take a deep breath and accept the fact that we’re ALL people, wherever and whoever we are. Deep down, we have more that unites us than divides us … our “Common Ground”. We need to find that!

JS: Aside from “Common Ground”, what new projects are you working on?

Brace yourself – this is going to be exhilarating! You’ve GOT to come see the shows.

Sincerely, if someone can’t afford a ticket, I hope they’ll get in touch and if I can, I’ll give them a free pass. I want as many people as possible to see the shows next year. We’ve got a GREAT band, some great tunes and a live show that Prince would be proud of. Yes, I dare say it: that good!

I’m also releasing two albums. The first is a “live” session I did at the Café De Paris in London. Very smooth, “croony” and cool. If i recall correctly,
it was pissing down with rain that night. But everyone turned out looking
glamorous with some funky hairdos on display. And we captured a great night I the recording.

I’m also doing some radio stuff, recording more new tracks in the studio and partaking of a few brandies for medicinal purposes only. So all is good!