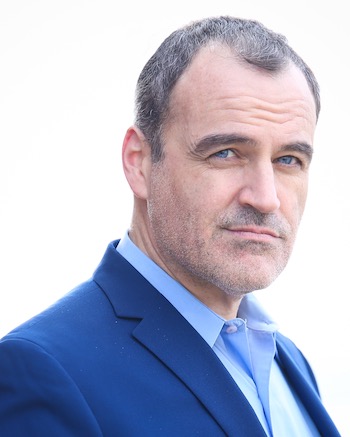 Sal Rendino has worked for over a quarter century in film, theatre, and television interpreting a wide variety of human experiences. The Yonkers, New York-based actor isn’t some supporting player aspiring to transition into significance but, instead, a seasoned professional with a plethora of important credits leaping off his resume. He has an important role in the forthcoming comedy The Junkyard Dogs alongside Denise Richards as well as appearances in several high-profile episodic television dramas such as Law and Order: Organized Crime, Billions, and Law and Order: Special Victims Unit, among others.

The loyal New Yorker has, nevertheless, experienced bi-coastal success. His stage work garnered him an Artistic Direction Achievement Award as “Best Lead Actor in a Drama” in Los Angeles. The impetus for this honor came from his portrayal of 1960s countercultural legend Abbie Hoffman in the world premiere of the play David and Goliath in America.  His East Coast peers, however, have lauded him accordingly. Rendino earned a recent nomination for “Best Actor” at the Brightside Film Fest and served as Guest Presenter for the 25th Anniversary Long Island Intl Film Expo Closing Awards Ceremony.

Three of the brightest feathers tucked in his cap is his appearance in One Moment, debuting on Apple TV on July 26th, and co-starring Hollywood legend Danny Aiello in his last on-screen role. Rendino’s well-honed talents are an ideal addition to this story of middle-aged siblings floundering in life and their efforts to care for an aging and recently widowed father. He’s also slated to appear in A-list productions such as Amazon’s series The Marvelous Mrs. Maisel during its final season.

The third is his appearance in the John Travolta-led biopic Gotti and Rendino’s performance as Genovese Family boss Vincent “The Chin” Gigante crackled with authority and understated menace. The movie had a troubled journey to screen that’s well-documented, but Rendino’s performance and overall professionalism never escaped notice. It’s joined by notable appearances as well in television series such as The Blacklist, Blindspot, and Royal Pains, among others.

There is much more afoot. Sal Rendino is one of those performers who seldom let themselves rest for long; they always hear an alluring voice calling to them from over the distant hill. His work comes from a settled place in his personal life, he’s one of the few in the acting world who has sustained a two-decade plus marriage, and it allows him the latitude to unlock creativity perhaps otherwise unavailable.

Sal Rendino’s artistic journey is far from finished. He’s arguably working at the peak of his acting powers now and he’s poised to contribute an enormous amount to any project he’s involved with. He’s the epitome of a “working actor”, but likewise a thoughtful and sensitive interpreter of a wide range of material. Covering the gamut from playing good-hearted family men to portraying mob bosses, Sal Rendino has proven he can successfully tap into whatever the role requires. He’ll be out there, you’ll see him in something soon, bringing the same distinctive blend of chops, personality, and presence to whatever part he takes.