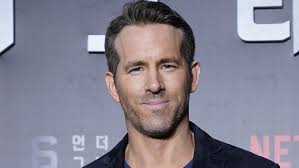 The ‘Deadpool’ actor was attending the CCXP event over the weekend and there was a scary moment as fans pushed hard against a barrier when he greeted them after a panel promoting his new movie ‘Free Guy’.

Speaking to ‘Entertainment Tonight’, he said: “Well, ordinance collapsed and that was a little, I think it looked worse than it was.

“All I was worried about were the people that were – what you could tell is that they were falling, like, ‘Oh, they’re gonna be fine’, and it’s like, ‘Oh, but that leg is gonna go’, so I jumped out.

“But it was, yeah, everyone was fine.”

The 43-year-old star was able to hop onto the stage to avoid getting hurt, and he admitted his wife Blake Lively has warned him to stay safe at the convention.

He added: “My only job that Blake said as I was leaving was, ‘Just come home in one place’. So that was my only job.”

Meanwhile, Ryan previously insisted poking fun at his wife – with whom he has has daughters James, four, three-year-old Inez, and a baby who was born in October – is “a sign of a healthy relationship”.

He said: “Oh yeah, we do ]troll each other online] once in a while. It’s kind of like what my dad used to say, ‘If you can’t say anything nice, say something embarrassing.’

“That’s how we roll. I think it’s a sign of a healthy relationship, personally. I do, yeah.”

He then teased that his trolling often “gets him in trouble” at home with Blake.

He added: “I think people kind of know [it’s a joke]… it gets me in trouble at home but, you know, I can handle that.”