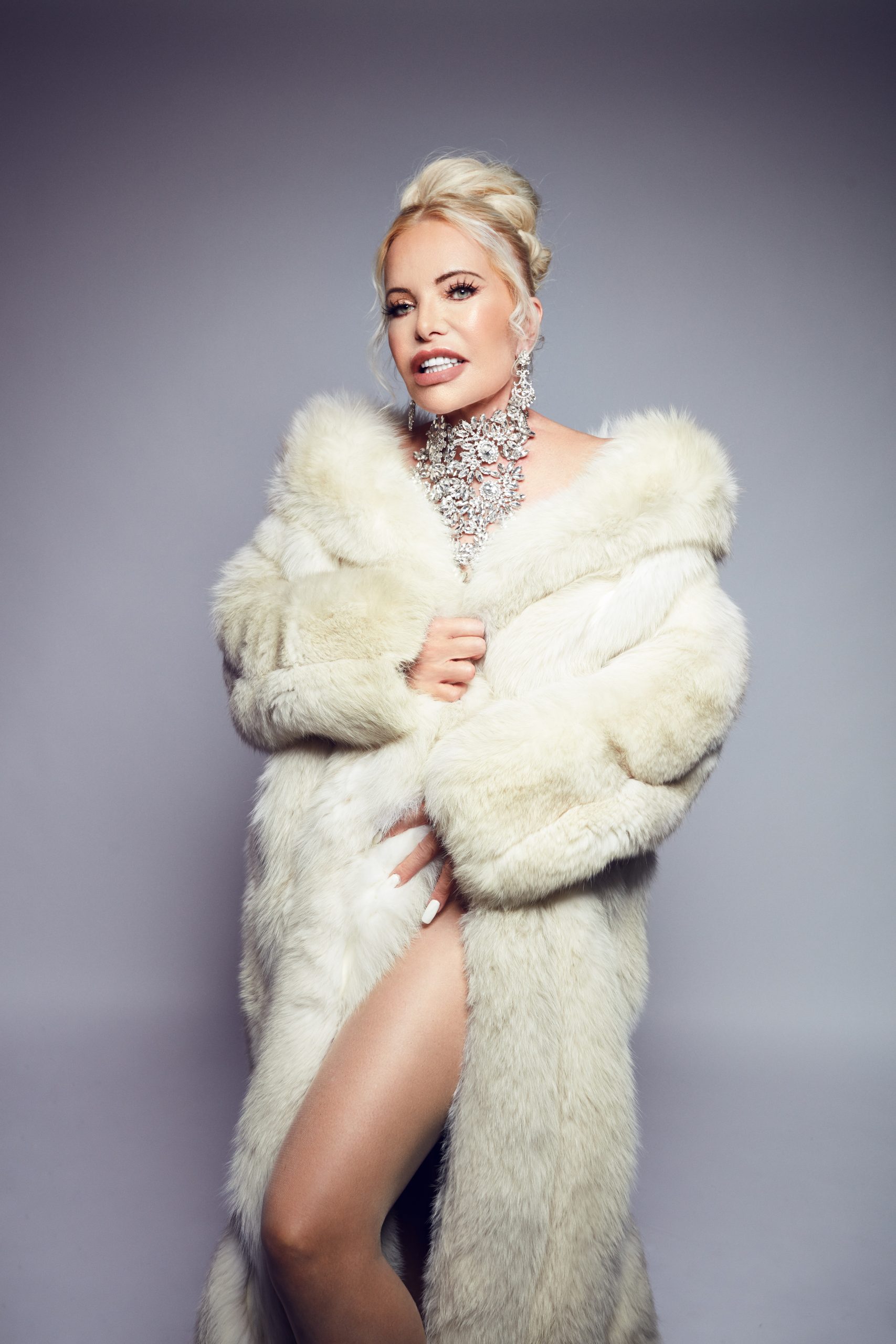 A salacious seductress Rich Nana‘s unmatched beauty and tenacious talent is arousing the entire planet in the most elegant and classy fashion. Like a painter making an impact on a blank canvas and orgasmically capturing the essence of a kaleidoscope of vibrancy, Diana Foster (recognized by her stage name “Rich Nana”) turned her debut video “Papi Chulo” into an unexpected avalanche of desire as well as a viral video on TikTok, Youtube and Instagram.

However, the 66 year old lifestyle and fashion icon is more than just a singer/songwriter. She has an extraordinary and intriguing backstage story that helped transform her into the fiery, self-made, jet-setting, sex-goddess that she is today. After escaping from the communist Czech Republic at age 15, she and her mom settled in Germany. She later wound up in Switzerland having worked as a topless dancer, a wine-dealer and club owner and finally a popular reality show star. Following a desire which became a destiny, the Versace aligned Rich Nana is not only an inspiration who has vanquished the theory of self-doubt, but a rising and unstoppable superstar….She knows that without risks there are no possibilities.

About to release a new video featuring Snoop Dogg, Rich Nana continues to elevate herself in the world of rap artistry and video queen. Unburdened by the shifting and fractured world, Rich Nana shapes herself to fit. Using a barrage of multi-chromatic dazzle she resists every rule and challenges regulation along with video impresario Gils Green (director of Nicky Minaj), who directs her and her posh lifestyle through the streets of exotic Cuba…..I spoke with the very down to earth yet eclectic Rich Nana who willingly and authentically told me her intimate story…..

To say that you are one in a million is the biggest understatement on the planet. What inspired you to become who you are?

Where did you run away to?

I went to Germany. When I was 15, for the first time in my life the borders had opened. My mom and I secured a passport and took a bus ride to Germany. It took us three days and we went as if we were just going to visit Germany, but we never came back. When we arrived in Germany, we went to the police and told them we were refugees. In reality we weren’t in any danger, nobody was going to kill us in Prague. Many refugees aren’t real. I wanted to have a full life. Under a communistic regime your life is boring. There is no news, no music, there was no TV, there was nothing. The only thing we would do is go to the cinema. Because we were refugees, they gave us a working card right away. This was in 1969 and there weren’t a lot of refugees at that time. They also gave us a passport for people without a nationality. My mom  died from cancer when I was 23 and I was alone, so I then moved to Switzerland. They later offered me a German passport, but I was already married to a man I met in Switzerland. I had been working in a nightclub, like a striptease club but we were only topless. Then my husband died, and a television show thought I was fascinating enough to feature me on a 2-hour reality show about “me.” I later started my own reality show.

What motivated you to start your own reality show?

I saw how much money they made off of me. They were making approximately 2000 Euros ($2,000) per minute on the shows featuring me. I was doing it for free, for the exposure. I did not receive a salary. For a half hour show they made $60,000. So, I hired my own team, bought the equipment and started doing that on my own.

I saw how much money they made off of me. They were making approximately 2000 Euros ($2,000) per minute on the shows featuring me. I was doing it for free, for the exposure. I did not receive a salary. For a half hour show they made $60,000. So, I hired my own team, bought the equipment and started doing that on my own.

You are a true self-made woman.

Same as you. You found something that you like and that’s good I think. When people do something they love they are successful. What you do is like a lifestyle, a community with these rock stars. You write history actually.

That’s exactly right, and you are currently making history.

We need to do what we want. Women like you and I need to do some crazy things but that’s good. Nobody expects things like that from a man. We are having fun. When you wake up you have a reason to wake up. I think 60% of the population just goes to work, but we have something to look forward to. When you love what you do you are successful. I started from zero. Normally like Cardi B and other rappers they started with videos that where shit. Then they mature and lose all those beginning videos and become successful.

You are a very positive and fun type of person. I can tell from your videos that you are having fun.

I have good connections with people in France and in Atlanta that I collaborate lyrics with. I have the craziest pop story of the year because I am from Switzerland and it’s not normal that some lady from Switzerland starts singing all these crazy American lyrics and making all these wild English speaking videos. I like doing the more classic videos with director Gils Green. He’s really very flexible. He’s really a very nice guy and we had such a good time in Cuba. It was so nice to work with somebody so professional like him. He told me I was very professional and that I inspired him too.

I am desperate to know how you got the name “Rich Nana?”

While Gils Green and I were in this wonderful restaurant for lunch we were talking. I told him that I had a problem because I didn’t have a name. They said Foxy Brown released an album called Na Na. In reality Nana means “Pussy” in American slang. He decided my name would be “Rich Nana” and I said “Ok.” He explained that Foxy Brown was singing about her pussy and also everybody wants a Nana.