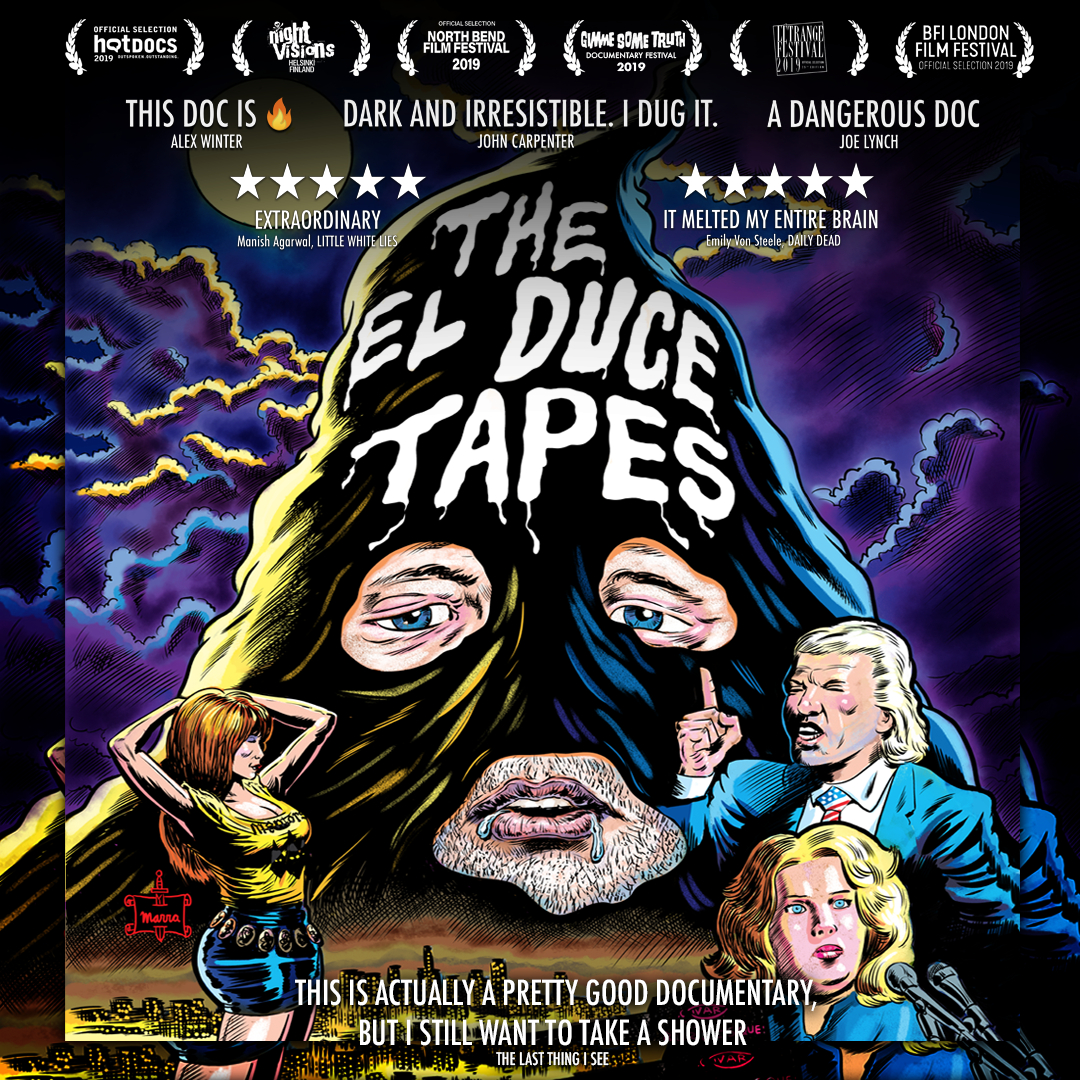 On March 8, a crowd of around 100 people gathered  at the Zebulon bar to celebrate the Los Angeles premiere of the documentary film The El Duce Tapes. The film centers around the lost  VHS footage from the early 1990s shot by the up and coming Hollywood actor Ryan Sexton.

The  documentary film has already been screened across the globe, with showings at the 2019 London FIlm Festival,  the 2019 North Bend Film Festival, as well as the Hot Docs Film Festival and others. The El Duce Tapes  was directed  by Rodney Asher known for his films Room 237 and The Nightmare, as well as David Lawerence, with producer Tim Kirk.

In  The El Duce Tapes, the  main subject is El Duce born Eldon Hoke, the admited alcoholic leader of a notorious shock rock band known for wearning black hoods on stage,  and performing a style of heavy metal called ‘Rape Rock.’ Hoke also became an unusual footnote in the history of Nirvana frontman Kurt Cobain,  when he was interviewed for a documentary film called Kurt and Courtney in 1997.  In the interview Hoke alleged that Cobain’s wife Courtney Love offered him $50,000 dollars to murder Kurt. Less than a week after this interview, El Duce was  found deceased on train tracks after being run over by a train, in what coroners labeled as ‘misadventure.’

The film feels like a time warp back to the late 1980s and early 1990s, a time  before social media, cell phones or even text messaging. Films were made with old school camcorders on VHS tapes, and this vibe is expressed immediately with blue screen, including some semi static and a dingy nostalgic quality that those from the time period would remember clearly.

There are a lot of captioned explanations in the film followed by VHS footage Sexton shot of the band while in Hollywood, and  while playing various shows during the 90s. However, there are times when El Duce, as well as his bandmate and friend, bassist Steve Broy aka Dr. Heathen Scum are interviewed in a candid fashion, answering very forthright and honest. For instance El Duce’s alcoholism is admitted by Broy and Eldon himself;  The film explores El Duce’s childhood and ostensible abuse by his father, which is a motif. He details vividly how his dad beat him and paddled him regularly and for everything.

What makes this  movie truly thought provoking, is that it is full of themes of sexual deviance, as well as alcoholism and racism that puts things into context. For instance in several clips EL Duce mentions Hitler, and talks about building a wall to keep out Mexicans. Of course he is shirtless and drunk as a skunk and performing for a handful of people at some dive bar, but still the rhetoric sounds eerily too much like real headlines, even though they were shouted by a belligerent and inebriated slob. But we learn later this is clearly to offend, Eldon’s close friends are black and he later in the film admits it wouldn’t be right for him to play for  certain white power organizations who asked The Mentors to play their parties. The band always declined.

In terms of the shocking offensive value of the term ‘Rape Rock,’ one of El Duce’s smiling girlfriend is a bit hesitant but admits that El Duce never hurt or raped her. We later learn the couple has been together only six weeks. But, other women like El Duce’s sister insist the character is just that, an act, or even a way of lashing out at his father. She even admits Eldon has a serious drinking problem.

The film also contains very personal interviews with  his sister and shows him as a human being with major flaws from the get go. We hear of his childhood and anecdotes that sound like someone who was emotionally disturbed, urinating in places, rubbing the doorknobs at his school with his own feces, and other vandalism; but simultaneously we are presented with him as a young and burgeoning musical genius, a drummer with natural talent from a young age. This along with the stories of abuse show to give a reason for the alcoholism; it is clear. He is shown throughout guzzling 40 ounces of malt liquor and even shots of booze.

Members of GWAR another notorious shock rock band of another kind, are interviewed mentioning how crazy of a motherf****r El Duce was.  It was told that one time at a GWAR show a dirty and wasted El Duce appeared onstage during GWAR’s concert to recieve felatio by a random female in the crowd. The late Oderus Urungus even admitted to partying with  El Duce and the Mentors, and appeared on an episode of Jerry Springer with the band.

The Mentors and their offensive trangressive songs like the ‘4 F Club’(Find Her Feel Her Fuck Her Forget Her) and  the infamous ‘Golden Showers’ among so many others have pissed off everyone from parents across the country to politicians like Tipper Gore, who lead an assault against musicians, and for censorship with the Parents Music Resource Center(PRMC) in 1985.

One ironic part is that until this national hearing The Mentors were just another punk band in the LA area, and they blew up after their track, Golden Showers was read in a committee hearing in Congress, where Frank Zappa defended their right to make such music.

The flim humanizes  El Duce and openly shows fans at his shows as mostly males yet the presence of willing females is also shown with the many dancers the band has used onstage during performances. However, it does not excuse his actions, but explores to seek whether or not his true personality was separate from the character of El Duce. With the amount of alcohol the man consumed, and the admitted traumatic childhood  it was difficult to tell.

The El Duce Tapes is a controversial film about a very offensive band and character. The music of The Mentors and El Duce’s musical and comedic vision with the band is portrayed as art.  In many ways, this theme that what the Mentors did was create art is expressed well in this film; it’s just outsider art, offensive and transgressive art, but art nonetheless. But behind the literal hood, perhaps El Duce was  just a fragile and vulnerable person, who has a severe drinking problem, but who ‘wouldn’t hurt a soul’ as his sister declared in one interview.

Perhaps he was a twisted individual with a sick sense of humor. Or perhaps he was truly a creep and a sicko. One thing’s for certain,  due to his death we will never know.