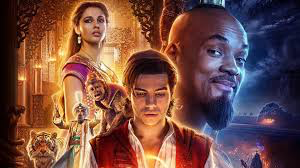 Time and time again, Walt Disney Pictures has proven that beloved classics, like Cinderella,Beauty and the Beast, and The Jungle Book can be reimagined as live-action masterpieces and still be just as magical as once upon a time. On May 24th, that fact was again proven to be true with the live-action reimagination of Disney’s Aladdin. Like the 1992 classic, Aladdin, directed by Guy Ritchie, is about a lovable, yet mischievous, street rat (Mena Massoud), who stumbles upon a magic lamp that contains a playful, yet loyal, Genie (Will Smith), who can give him anything his little heart desires in the form of three wishes. But, with that luxury comes danger and stress, mixed with a little bit of responsibility, as Aladdin has to get rid of Jafar (Marwan Kenzari), a greedy and evil sorcerer, and attempt to win the heart of the beautiful and bold Princess Jasmine (Naomi Scott). While this gem of a film mirrored the storyline of the beloved 1992 classic, it provided its own uniqueness and fascinating surprises that audiences probably didn’t see coming, but were delighted to witness. But, even with the jam-packed additives (and lifelong lessons), this reimagination of Aladdin managed to show audiences “a whole new world” and, though it goes without saying, it surely DID NOT disappoint.

An aspect that cannot be ignored in this updated classic is how the characters evolved into their own instead of remaining exactly the same and 2-dimensional. What do I mean? Well, Aladdin is a perfect example, but of course. In the 1992 classic, Aladdin possessed wit and charm. Not to mention he was insanely handsome (he still is if I’m going to be honest). But, in this updated classic, he not only possessed wit and charm; he also possessed a sense of understanding…all while, again, being handsome. Cherry on top, he actually demonstrated how to be a friend, a GOOD friend at that. Now, call me overdramatic if you must, but in the 1992 classic, it was clear that Aladdin didn’t understand that pals came before gals. In other words, after Aladdin met Princess Jasmine, he pretty much treated Abu like a third wheel. If anything, it appeared like he didn’t give him the time of day. However, in the updated classic, Aladdin didn’t think twice about paying attention to him. As a matter of fact, he shared quite a few “father-figure” moments with him, especially when he instructs him not to steal in certain occasions. And while I’m mentioning Princess Jasmine, let’s talk about the fact that she not only maintained her voice, but she also TOOK CONTROL. Unlike the 1992 classic, Princess Jasmine not only wanted to marry for love, but she genuinely wanted to be Sultan. What’s wonderful about her subplot is that she KNEW what she wanted and she went after it with everything she had, even if she kept hearing “no”, “no”, and “no”. She practically held and maintained the mindset of, “You’re not going to tell me ‘no’ and think I’ll just stand here and take it.” She made that very clear when Jafar stooped to the lowest of the lows (is that even possible?), which resulted in her mindset literallyspeaking for herself. As a woman, I can appreciate that Disney made the sub-plot subtly about woman empowerment. After all, that’s kind of what we need, considering that we live in a pretty much male-dominated world.

Now, we definitely have to talk about the Genie because he definitely wasn’t the same Genie we all know and love from 1992 classic. Honestly, that’s not a bad thing, especially because it allowed Genie to become the 3-dimensional character he deserved to be. What especially stood out is the fact that he broke the fourth wall just as he did in the 1992 classic. High-key, I was rooting for some fourth wall moments from the Genie because his many dialogues, one-liners, and audience interactions are part of what made the movie so special. In the film world, breaking the fourth wall is kind of looked down upon because…why interact with the audience when they just want to enjoy the show? But, in this instance, it was completely warranted and actually kind of appropriate, especially in the musical number, “Friend Like Me”. I mean, seriously. How could Aladdin still appear confused as to the central purpose of the Genie after all of that explaining? It was pretty self-explanatory: HE GRANTS WISHES. But, then again, what do I know? While he was still a jokester like his 1992 counterpart, he was a lot more witty and not afraid to show Aladdin who was boss. If anything, he had a bit of a mouth on him. He made that clear when Aladdin tried to make excuses as to why he couldn’t approach Princess Jasmine…AS A PRINCE. And if you thought he was going to accept his reasoning as to why Aladdin could no longer wish him free, you thought wrong. And can we talk about the fact that Genie was given a love interest…more like granted a love interest? I mean, after all, entities need love, too. If anything, their love story almost overshadowed Aladdin and Jasmine’s love story just because of their natural chemistry. As mentioned before, that’s not necessarily a bad thing. Matter of fact, I can’t really be mad at that and neither can other fans who were rooting for the Genie’s “happily ever after”.

Whether you’re an adult looking to be a kid again or a child being introduced to the wonderful world of Agrabah, Aladdin is an absolute gem for all ages. It is literally so captivating that it would be a huge regret to miss it. Although May 24thhas passed, it is definitely not too late to treat your eyes to the amazing Aladdin. Believe me, at its conclusion, you’ll literally be singing, “A Whole New World”, while remembering Smith’s rendition of “Friend Like Me”. Then again, that might prove to be difficult if you’re still awed by his rendition of “Arabian Nights”.😉