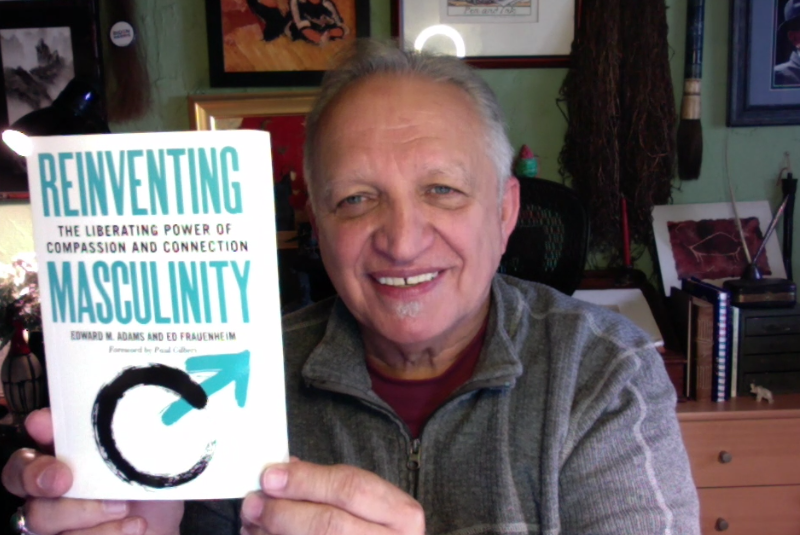 My father served in the United States Army during the Korean War era. He had almost wrapped up boot camp when the war ended. His mother, a homemaker and devout Pentecostal, died in the same time frame. He blamed himself all his life for her death; he would see how bad she felt and taken her to the hospital much sooner than anyone else. Her death provoked a nervous breakdown. The Army wanted him to meet with a military psychiatrist, but he declined. Uncle Sam discharged him. Years later, nearing the end of his life, he made calls about his military records and they told him about his pension eligibility. He never took a penny. He did not want to discuss, decades removed from her death, what he saw as a failure of his manhood.

Ed Frauenheim and Dr. Ed Adams would say my father suffered from confined masculinity. There’s no disputing it in my mind. Their book Reinventing Masculinity: The Liberating Power of Compassion and Connection makes a convincing case for how rethinking masculinity in the modern world for its potential to increase professional efficiency if nothing else. The writers do focus on the workplace over interpersonal relations, but they don’t limit themselves to its professional implications alone. Interested readers might find themselves longing for a bigger and more exhaustive work but as many, if not more, will applaud the job they do condensing a complicated issue down to such a manageable length.

Advocating the importance of compassion and the ability to make connections with others as the cornerstone of a new vision for masculinity may seem obvious to some and revolutionary to others. I would dispute any assertion that men predominantly fall into the stereotype of embracing confined masculinity and the authors, to their credit, point out that men are awakening in greater numbers to the idea of viewing their masculinity in a different way. Having said that, however, I do feel like the writers too often view the issue through a binary lens.

They are forthright about their intentions and ambitions throughout Reinventing Masculinity. This inspires a tremendous amount of confidence in sympathetic readers; you are more apt to take their assertions to heart instead of greeting their ideas with cynical skepticism. There’s no doubt many readers will decry the book’s “liberal point of view” but the writers back up their concepts with field experience dating back decades.

Dr. Ed Adams’ work as a psychologist and former President of the American Psychological Association’s Division 51. Division 51 focuses on addressing the emotional needs of men and boys and helps make Adams’ experience ideal for this work. Longtime author Ed Frauenheim utilizes it well. Frauenheim, currently senior director of content for research and advisory organization Great Place to Work, has several books on workplace health available and is also co-founder of the Teal Team, a company devoted to helping organizations develop more democratic and compassionate work environments. They know what they’re talking about and you never doubt the seriousness they bring to bear on this book.