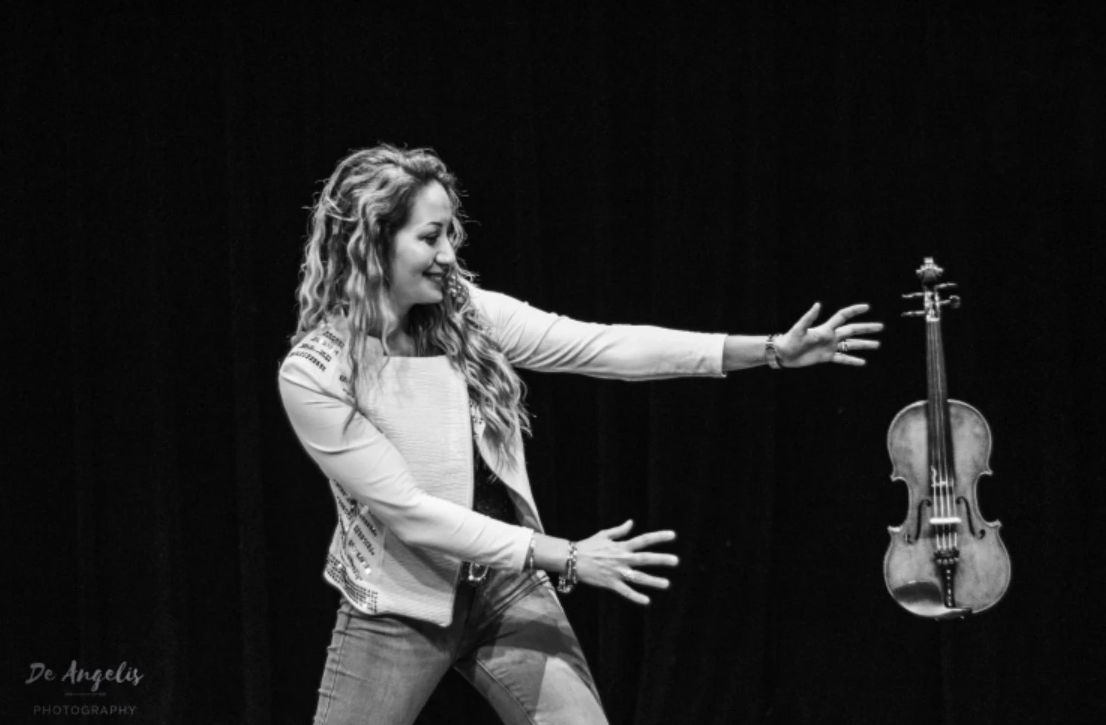 Hungarian-born Bernadett has a long musical lineage. Her maternal grandfather Jozsef B. Suha ranks high among Hungary’s greatest classical musicians and his violin compositions remain relevant today. The music bug first bit Bernadett at the tender age of six when she began learning to play the violin, but her love burned at a low flame until an Italian concert tour at age thirteen set her path for years to come.

Bernadett studied violin at prestigious institutions in Graz, Austria, among other locales, and apprenticed as one of the world-renowned violin soloists and educator Silvia Marcovici’s best students. Many in music are familiar with the expression, paraphrased here, that you have to master your fundamentals before ignoring them and that applies to Bernadett too in a unique way. Her first love, classical music, is a powerful component in her playing, but Bernadett has diversified her style in such a way she can incorporate several threads into her playing without ever veering off-course.

Her latest release Redemption is her finest work to date. Bernadett understood some time ago that people’s preconceived notions about the violin and its relationship with classical music meant broadening her playing style and material better serves her ambitions. She wants her playing to reach the widest possible audience rather than a niche fanbase. “Redemption” illustrates her ambitions well. The seamless synthesis of the pop backing with Bernadett’s violin proves this is a viable blend within seconds.

Those bemoaning the absence of a singer will be few and far between. Bernadett embodies emotion through her instrument as few musicians can. While you can lay much of the responsibility for this at the feet of her technique, she has an undeniable and intangible connection with the violin. The strings sing in her hands and their range appears boundless. The aforementioned pop backing is a simple configuration of keys, bass, and drums, and remains unobtrusive yet steady throughout. “Redemption” has a fully realized effect few listeners will fail to appreciate.

The compelling melody driving much of the song will get a lot of well-deserved attention. Bernadett’s violin carries it with aplomb, never shirking from the moment, and playing each line in such a way that it builds on its predecessor. Her articulation is unfailingly precise, and the production captures it with superlative clarity. The lack of any vocalist will, once again, pose few problems for listeners. Instrumentals are rarely commercially popular, but no one can say Bernadett’s music doesn’t sing.

It sings from the heart. She didn’t decide to forego classical music for pop in vapid search of fame but, instead, because of her desire to communicate with and play for music fans. Two songs is all it takes for Bernadett to convince you of her artistic powers and you’ll find yourself wanting more. She’ll be back, for sure, and Redemption will help expand her audience in ways she didn’t believe possible. This is an artist ready for prime time and she has the staying power to remain relevant for many years to come.