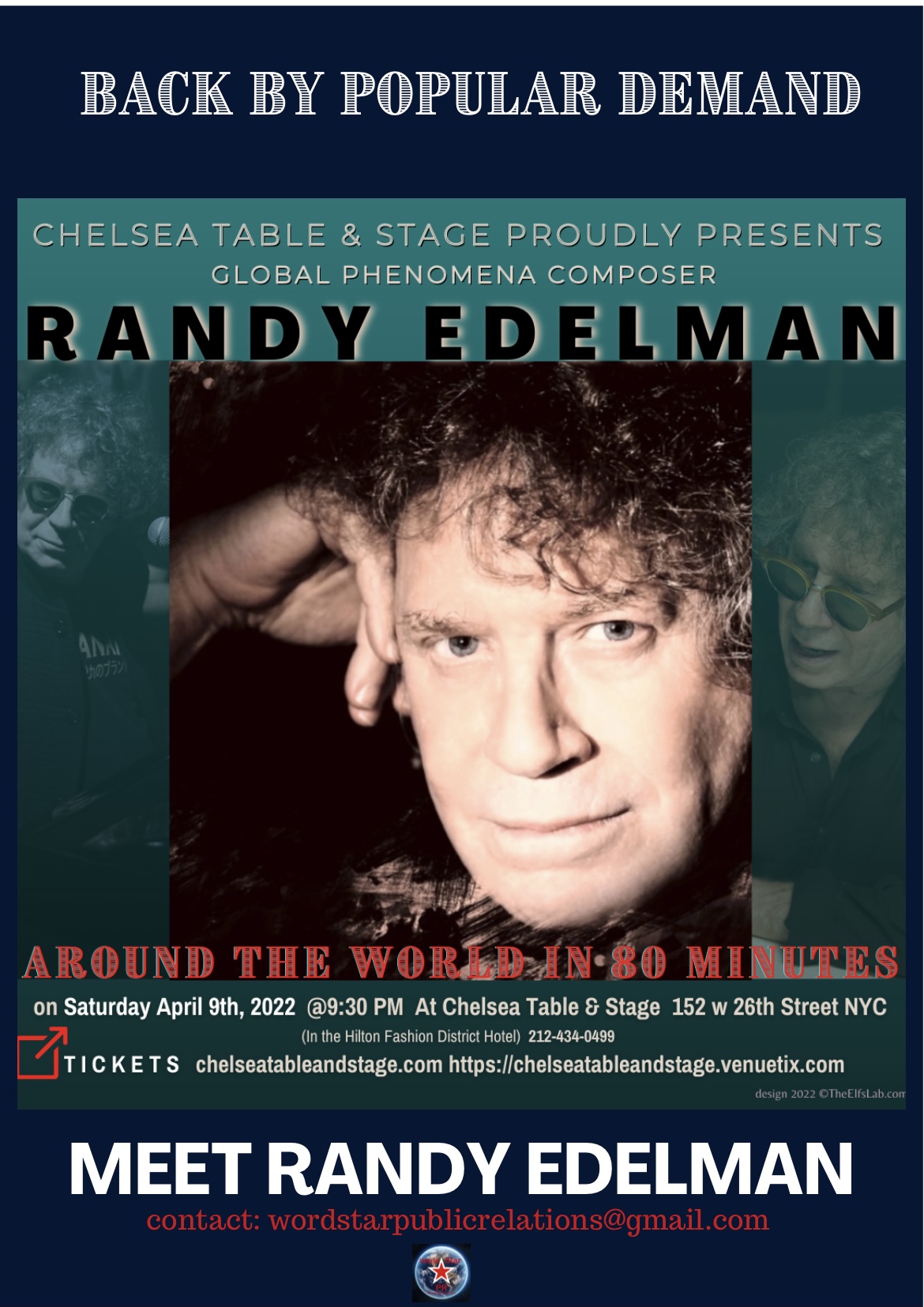 Randy Edelman: “Around The World In 80 Minutes”… Back by popular demand…. Again and Again and Once Again @ Chelsea Table and Stage: April 9, 2022

Composer Randy Edelman intimately captures his audience, forever giving his soul to touch their hearts and in return they ultimately hold him and his piano hostage on stage.  Dubbed “Best Live Set in 2021” by “Rock NYC”, Randy is swiftly becoming the “hottest ticket” in town and therefore returning by popular demand once again to the “Chelsea Table and Stage” on Saturday April 9, 2022 at 9:30 pm with his “Around the World in 80 Minutes.”

Randy always plays as if in the presence of a master, the craziest thing is that HE is one of the masters. Gifted with the ability to communicate what others feel through his music but cannot always express.

“Around the World In 80 Minutes” is a celebration of his work, a self-portrait of his mind, the Epiphany of his convictions, and the backstage stories of his monumental career, thus far.

As a pop star he showcases his hits, “Uptown, Uptempo Woman” and “Concrete and Clay”, as seen on the iconic British music chart series “Top of the Pops” (along with rockers including David Bowie, Michael Jackson, Rolling Stones, Green Day, Jimi Hendrix, etc.). As a pop song writer for some of the most popular artists of today he features songs including “A Weekend In New England” (as recorded by Barry Manilow), “Isn’t It a Shame” (as recorded by Patti LaBelle and hip-hop artist Nelly), “You” (as recorded by The Carpenters), “The Woman on Your Arm” (as recorded by Bing Crosby), and a cascade of others. He also performs his global post pandemic hit “Comin’ Out the Other Side” and his new pop/R&B romantic tragedy “How Could I Let You Go”, both which are getting rave reviews.

As one of the world’s most illustrious film sound designers he has written and orchestrated the music for over 100 blockbuster movies in every genre imaginable and for some of the biggest producers, screenwriters and directors (Ivan Reitman, Rob Cohen, Jonathan Lynn). Included in an inconceivably long list is “Last of the Mohicans”, “My Cousin Vinny“, “Ghostbusters II”, “27 Dresses”, “The Mask”,  “Twins”, “XXX”, “Kindergarten Cop”, “Gettysburg”, “While You Were Sleeping”, “Dragonheart”, and the catalog never ends. Randy does several medleys of the music from these films and also includes the theme from hit television series MacGyver. The only thing he doesn’t include is his themes from the Olympics, ESPN and NASA.

His music might not be that of a spiky modernist, or a redundant minimalist, but he writes in a neo-romantic idiom, with sensitive lyrics as close to passion as it could be. Along with his fragrant behind the scenes tales, he makes the crowd think with its sympathy and not its reason. He guides them through a roller coaster of emotions, tears, laughter and love. The audience remains mesmerized, never a creaking chair, only the roar of the crowd. Although Randy has played in some of the biggest arenas including Budokan in Japan and Drury Lane in the UK, and has opened for some of the most prestigious acts including Frank Zappa, playing for a live audience is a different ball game. It’s intimate, dangerous, as everything is heightened, the silences more silent, but Randy Edelman is a Rock Star and was made to do this.

The official website for Randy Edelman may be found at https://www.randyedelman.com

Chelsea Table & Stage is a unique venue and restaurant where every seat feels like the front row. Experience some of the best touring performers on the planet and an ever-changing culinary and entertainment line-up. The 120- seat venue features state of the art sound and lighting and intensity in theater bar. The menu features American fare, a curated wine list, and specialty cocktails. Experience the Fashion District‘s destination for the ultimate NYC night out.