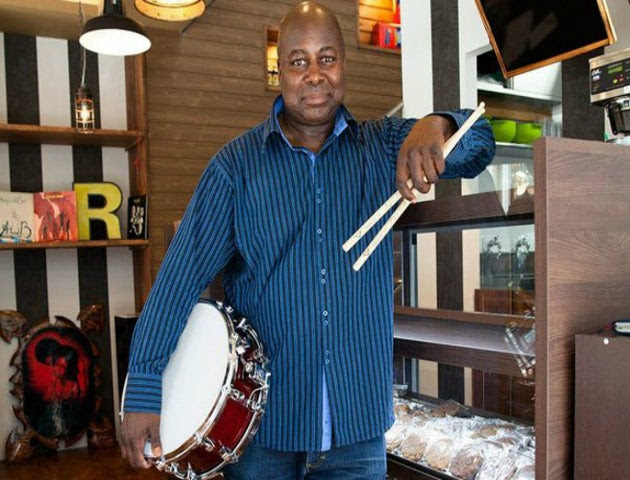 Ralph Rolle and “Soul Snacks” Get Picked Up By Walmart

Ralph Rolle began his music career playing the drums at a very young age while growing up in the Bronx. He has played and worked with some of the greatest musicians of our times including Aretha Franklin, Nile Rodgers, Queen Latifah, Sting, Biggie Smalls, Erykah Badu, Bono and many others. From being one of the most amazing drummers on the planet, Ralph decided to bake cookies….His first client was Dougie Fresh‘s restaurant, and then the cookies skyrocketed. Everyone’s story begins with once upon a time and it is up to us to cherish the time we are given to ensure that we live happily ever after.

After more than 3 decades of making music Ralph founded “Soul Snacks Cookies“ in 1996, however it’s recipe historically  began in the early 1900s via his maternal grandmother. According to Ralph dreams still come true. “My plans for expansion are rooted in the promise and the potential of the community” quoted Ralph. His plans for expansion now include a rollout campaign that will bring Soul Snacks Cookies to 700 Walmart stores across the country beginning in April of this year.

So you were this huge, huge musician, playing with the most famous people on the planet and then you started to bake cookies?

Yeah… It started some years ago actually. It started about 26 years ago in my apartment. One day my production team came over and we were working on some music and I decided to whip up some cookies. They looked at me as if to say what are you talking about? So I went into the kitchen and I made some cookies and I came back and then they basically said, “just make sure that you have cookies every time we come back.” They thought they were amazing. Not too long after that my girlfriend moved in and for the holidays we decided to give out the cookies. We had 36 friends and family and didn’t have a lot of money as a working musician, so we decided to make the cookies. We did and we sent them out to everyone and everyone liked them so much they said we should consider selling them. I had thought about it before and then decided that I might give it a try. That’s how it all that started. I was working at an open mic on Tuesday nights at Sylvia’s Restaurant and I asked Melba who is the proprietor of the evening if I could sell cookies. And she told me that it was fine and to just bring them in. So, we did. My girlfriend who also grew up in public housing was a Juilliard graduate, and I was working at the Apollo theater doing a TV show, and we gave her some cookies. We sold the cookies and there was a guy at the bar from a magazine called YSB Magazine. He really liked the cookies and wanted to know more about myself and my girlfriend and thought it was a really great story and offered to do an article about us. So we did.

I was so unprepared that I gave him my sister’s pager number because I didn’t want to give him my home number and I didn’t have a pager. So that’s what I gave him. I told my sister that would probably get a couple of calls as a nice gesture. Well, I was so completely wrong it was crazy. The first day I got a couple of calls and then I got 20 calls, then 30 more and decided that the apartment was just for a hobby and I needed to find a space. So just across the street from me a young man that I grew up with had mother with a brownstone. The first-floor apartment was available. I asked him to ask his mother if I can convert it into a baking facility, but he refused and told me to ask her. His mother was just as strict as my mother. So, I went to miss Durant and explained to her that I was starting a business and explained to her that I would have to gut the kitchen and put in a convection oven, a ventilation system, and so forth. She listened to everything I had to say and then said OK. She gave me a very affordable rent and that was my first facility that I moved into.

I hope you have a bigger one now?

Right now we have a 1250 square-foot facility and we’re moving into starting in March and a  2100 square foot facility where we are actually opening up a culinary school. I am actually doing that with Mr. Billy Yosses . He’s a pastry chef and a great guy. He was a pastry chef for the Bush family and the Obamas. He now has a show on Hulu called “Baker’s Choice.” We met working at a foundation called “Voices For Life” and it was put together for the purpose of building a cancer hospital for children.

Are their different flavors?

Do you supervise the making of these cookies, or are you still playing the drums?

You have played with the most iconic legendary and coolest people on the planet, do they know that you’re baking cookies?

Some of them do. For example, I know that many people I have worked with know  that I bake cookies. Bette Midler knows. Whoopi Goldberg knows that I have a cookie company. Nile Rodgers is one of my biggest fans. I did a gig with him yesterday in California.

So, Walmart is going to start selling your cookies. How did that come about, because it’s so huge?

As far as contact is concerned, I make sure that there is a lot of contact information available especially on social media where people can hopefully find me and see what I’m doing. Someone was looking who was a very wealthy man and he was looking for a trademark, and he came up with the trademark “Soul Snacks.” When you Google the trademark and do a trademark search my name popped up. It also popped up for the website. Then he saw that I was a musician and that I had a coffee company. The next thing I know he somehow got my phone number and gave me a call. So we got on the phone and I came to find out that he was very successful in business and that he wanted to start a cookie company and “Soul Snacks” is what he wanted to call it however I owned it. So then he asked me if I wanted a partner to do this. I absolutely wanted to talk about it and then he showed me the things that he had done. Next thing you know we’re in contract and now I have a deal with Walmart…..