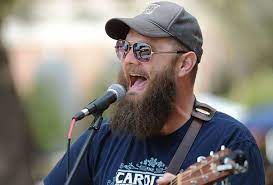 Americana is getting a fresh spin from southern hybridists Ralph Nix & the Guilt Birds in Good Ingredients this January, and calling it anything other than a lush exhibition of the band’s most intriguing qualities would be wholly dismissive of what they’ve accomplished in its tracklist. Building on the strength of past releases from Nix like 2014’s Sins I Have Sown, Good Ingredients blends vibrant Americana with an ominous blues tonality in tracks like “Cohay,” “Retold” and the aching crossover number “Call Me Baby.” There’s a little something for everybody in these ten stylish new songs, and frankly, you don’t have to be the biggest fan of roots rock to appreciate just how phenomenal a record this is from start to finish.

“Wish” is one of the more melodic songs on the album, but it isn’t devoid of Nix’s trademark growl, which in almost every instance here defines the tonality of the music just as much as any of the string play does. “Window Shopping” struts with a Delta-inspired swagger that punches us hard in the gut at the onset of the song and follows up its intimidating introduction with a smoky harmony that will haunt your dreams long after the music has stopped playing. While “Mercy Me” employs a similar formula, it sets itself apart in this group of tracks via a reverberated harmony between Nix and the guitars that is so decadent that it rivals the excess of mainstream pop when it’s operating at full charismatic capacity in the chorus.

“Falls” invites us close to the melodic nucleus of Good Ingredients on the whim of a bluegrass-influenced melody that eventually gives way to a tortured serenade from our lead singer, who is perhaps more intimate with us in this track than in any other on the entirety of the record. It’s followed by the folkie tune “Stella,” which sees Nix and his Healers digging into a style of lyrical duality akin to what I would expect from Tom Waits, without borrowing too heavily from the rock n’ roll experimentalist’s playbook. The rollicking guitars here revisit us in the closer “Whiskey Drink’n Women,” but I think it’s worth noting that no two songs on Good Ingredients utilize the same framework – something that we could only hope to say of the output that this band’s most formidable rivals have been sharing with us lately.

My favorite track in Ralph Nix & the Guilt Birds latest album is probably the moaning blues dirge “Marie,” which comes to us saturated in melancholy but spiked with a sensuous groove that is understated at first but quickly becomes an unstoppable force to be reckoned with as the song carries on. I’ve been aware of this band and the accomplished leader behind its creation for a minute now, but I don’t think that I fully expected the scope of musicality that they can present via the studio work they afford us in this record. Ralph Nix turns in a solid effort here, and the Guilt Birds don’t disappoint in any of these songs as well.