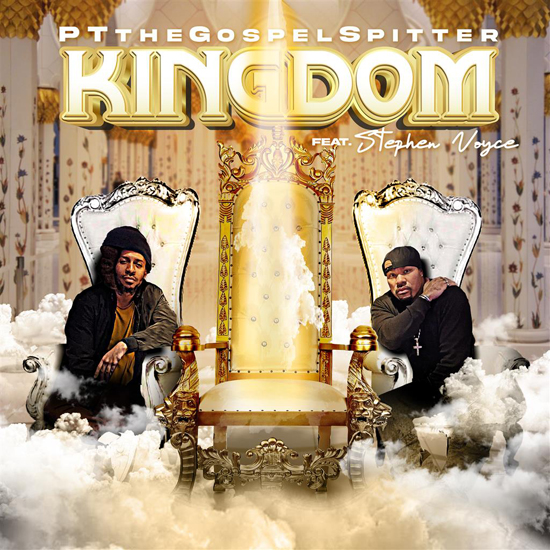 Ashante P.T. Stokes’ journey from youth chanter at Atlanta, Georgia’s Wheat Street Baptist Church to where he is today is nothing short of astonishing. Inspiring, as well. I am not a believer. However, you do not need to be a believer to feel the emotion, faith, and depth of a song such as Stokes’, under the nom de plume PTtheGospelSpitter, latest single “Kingdom”.

He shares vocal duties for this track with the impressive Canadian/Nigerian vocalist Stephen Voyce and it is this reviewer’s considered opinion that they revisit this collaboration possible. Voyce’s pop and soul leanings are a natural fit for Stokes’ gospel roots and his own considerable soul and R&B chops. I never hear either singer, however, stepping on each other’s toes or rendering the second singer faceless; instead, they play off one another with the sort of ease one might expect from an especially inspired first take.

The beating heart of the cut for me though is PTtheGospelSpitter’s lyrics. I come away from this track deeply impressed with Stokes’ ability to frame very personal beliefs in a way that’s capable of attracting a broad audience while still appealing to the clear core listeners he’s playing for. He further impresses me because, after all of that, he’s still able as well to convey a truly poetic sense of what’s possible for him.

He does that without any overinflated language. The song speaks to listeners with well-chosen yet unfettered language and any listener, no matter their religious leanings, will feel hooked into Stokes’ depiction of his path. Voyce manifests the same emotional intensity throughout, as well, but both singers do the song an enormous service by clearly shaping their vocal performances to fit the track. It’s the mark of canny instincts far more developed than their respective youth might imply.

Stokes’ previous work bears the same characteristics, but there’s a strong sense in this particular song that he’s elevating his game. Marrying gospel with the secular isn’t as easy as it sounds as that religious point of view will often crowd out potential listeners who might otherwise flock to material such as this. PTtheGospelSpitter seems to recognize this as he foregoes the gospel sound of his youth in favor of a thoroughly mainstream arrangement.

It is also an arrangement that shows his acumen as a songwriter. There are several compelling changes in the heart of this song though it is clear his intent is never self-conscious dazzle. Everything has its function in this song. Nothing is meaningless tinsel. Instead, we hear an artist who has engaged with every facet of this song’s creation, never coasting or taking a second off, and it results in an unified and coherent work that will likely stand among his best for some time to come. “Kingdom” will win over converts – but not like that. It will be difficult for all but the hardest of hearts to end this song dismissive of what they’ve heard. We need more music like this in these increasingly troubled times.