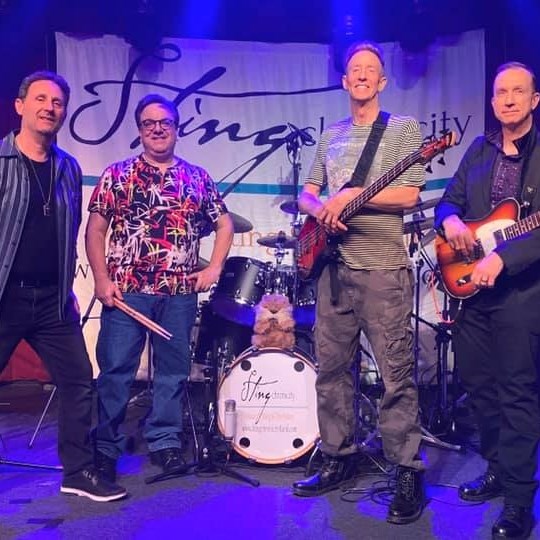 The riff that stabs away at the beat in “Message in a Bottle.” The pulsating exodus into the horizon that follows a deluge of decadent vocal harmonies in “Every Little Thing She Does is Magic.” The haunting melody that seems to shadow our every step in “Every Breath You Take.” That humble voice we all know so well reminding us it isn’t going anywhere anytime soon in “If I Ever Lose My Faith In You.” These are some of the most iconic elements that immediately bring most listeners back to the music created by Sting and The Police over the last four and a half decades of rock n’ roll history, but when they’re presented through the unique lens of cover band Stingchronicity, these songs sound as honest and endearing as they did the first time they were played on your FM dial. Stingchronicity have been raising an eyebrow or two among critics lately for their passionate live performances, captured elegantly in a new promo video shot at The Ardmore Music Hall in Pennsylvania, and while you don’t have to be the biggest fan of their star influence to love the music they turn out on stage, those who worship at the altar of The Police should be more than pleased with what this band is doing right now.

Stingchronicity’s take on “Roxanne” is anything but conventional, with their rendition inviting a lush piano melody into the mix, as if to maximize the muted romanticism in the lyrics through a boldly experimental patch of instrumentation, but I wouldn’t go as far as to say that they sacrifice any of the original song’s bassline prowess in the name of putting their own stamp on the composition. Other tracks in their new promo video, such as “Synchronicity II” and the aforementioned “Every Breath You Take,” see the band not having to adapt much of their own style of play to suit the complex nature of the compositions at hand, and even though we don’t get to see any of their interactions with the crowd, there’s not a doubt in my mind that a packed audience would feed off of their energy marvelously.

Those who can’t get enough of Sting’s legendary songwriting really can’t go wrong in checking out Stingchronicity this spring, and if you’re lucky enough to catch their stage show in person, I would recommend doing so on the next possible occasion. While it could be really interesting to hear these guys play some original material, simply because of the authenticity that their musicality so liberally boasts, I don’t think they’re doing anything wrong in continuing to pursue the path they have as a Police cover band. It isn’t typical of artists in their league, but this is a group that truly has a firm grasp of their source material and can deliver a performance that doesn’t come off as gushy or overindulgent in the least. They’ve got a lot of potential moving forward, and if I were you, I’d keep them on my radar throughout 2020.