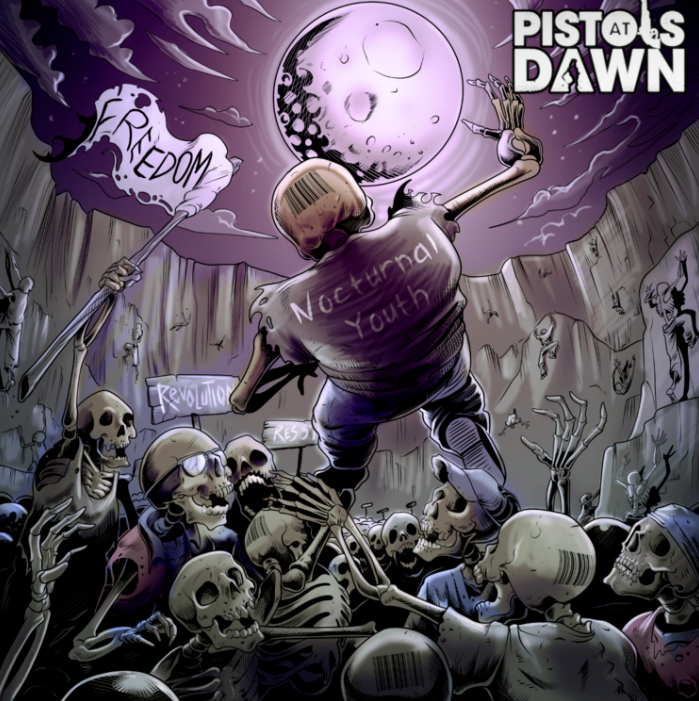 Rock EPs are too often defined by one song alone, the crown jewel of an upcoming record still being properly assembled inside of a recording studio. Though Pistols at Dawn’s new four-tracker Nocturnal Youth has one heck of a lead single in “Crown” that would justify picking it up in the first place, it’s certainly got more muscle on its bones than this lone song can muster. Pistols at Dawn make meat and potatoes metal, and for my taste in the genre, their cut and dry approach to songcraft really hit the spot this spring season.

“Crown” as both a single and a music video relies on the brawniness of its guitar parts to make up for a lack of lyrical and visual frills, but if you’re not a fan of the fluff that typically gets in the way between a righteous riff and the audience it was created for, this is a terrific formula for sure. The emotion in the music is unfettered by any of the poeticisms and overthought concepts usually adorning a virtuosic instrumental performance of any genre, which makes it possible for us to appreciate the depth of Pistols at Dawn’s narrative as much as we would their strength as players.

There’s definitely more substance to songs like “Voices,” “Now is the Time” and “Gone Black” beyond what their texturally expressive string elements can produce, and if we look at the relationship between the percussion in these tracks and the mashup of melodic componentry on the opposite side of the mix, we start to discover what makes this group so exciting to serious music lovers. There are progressive influences just in the construction of the harmonies here, and though a bit flawed in spots, they cultivate a deeper sense of continuity between the songs that I want more of – particularly in a full-length studio album.

I’m really curious to see where Pistols at Dawn wind up going from here, but if there’s one thing we can surmise from the contents of their new extended play, it’s that they aren’t going to back down from the challenge that resurrecting heavy music from the dead has become in 2021. Nocturnal Youth is fodder for headbanging from one American coastline to the next, and in a summer that is bound to be packed with road trips for rockers around the country, it couldn’t have hit record store shelves at a more optimal moment than the present.