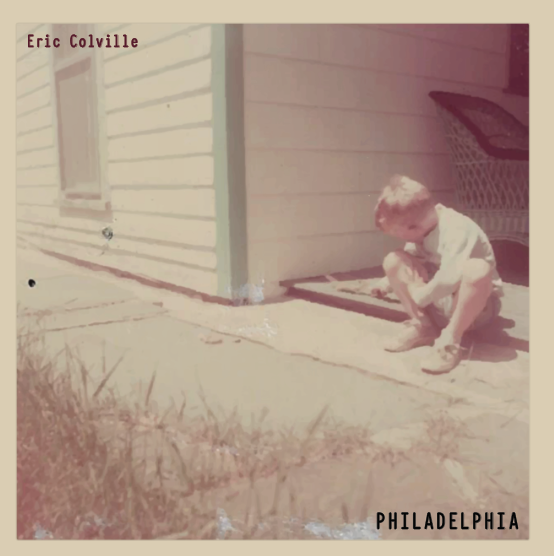 A new wave of singer/songwriter culture is exploding around the world right now, and although there’s been a lot of talk about the alternative country crossover players emerging from the west coast, Eric Colville is bringing something fresh from Atlantic shores courtesy of his new record Philadelphia. Steeped in rich acoustic textures and elegant vocals that convey lyricism personal and commentarial the same, songs like “Afraid to Dance,” “35 & Thinking,” and “Limbo” comprise a smorgasbord of emotions never checked in the name of pop pleasantries. This is a raw LP, but it’s presented with such a refined production quality that you know its creator spent a lot of time and effort making it as perfect as possible (at least in terms of the narrative he wants to offer).

Colville isn’t in a rush to unleash his passions here; truth be told, I think he’s rather conservative with regards to the pacing of this tracklist. We start off rather simplistically with the title track and “How Come” before slipping into heavier territory ala the haunting “Song for Will” and “End of War,” neither of which match the timing of the first third of the album. None of this material ever comes off disjointed, though, and I think it’s worth noting how profoundly smooth everything plays out in Philadelphia, almost as if we were listening to an offhand live performance neither rehearsed nor recycled from someone else’s artistry. This player is the real deal, and he’s not shy about flexing some creative muscle here.

I get the impression that tonality is as coveted a premier feature to Eric Colville as actual compositional formulas are, mostly because of how the instrumental aspect of this record glistens in tracks like “Remember to Forget,” “Shadow of a Doubt,” and the honest “Be Alright.” He’s never trying to steal the spotlight with his voice; quite the contrary. There’s an intimate relationship between singer and strings in Philadelphia that’s never guarded by a synthesized buffer, and when the chips are down and we compare the quality of this mix beside the other indie folk content you’re going to hear coming down the pipes in the next couple of months, there’s no debating whether or not this is the greater treasure.

Lyrically and instrumentally, Eric Colville’s Philadelphia is a tour de force that never asks anything more from its audience but a pair of speakers through which to shower us with straightforward songcraft. This is an artist who has the right concept for both his career moving forward and the present state his sound is in, and although there are a lot of other singer/songwriters who are trying to accomplish the same thing that Colville is at the moment, few are actually putting forth the kind of emotionally charged material that Philadelphia is literally filled with. It’s an LP that arrives against the backdrop of a year that needs a little more peace in between the news breaks, and I think it’s going to be a real hit with alternative fans especially.