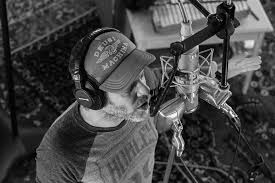 Patiently Awaiting the Meteorite’s “Devil’s In My Car” (PREMIERE)

In the new video for Patiently Awaiting the Meteorite’s “Devil’s In My Car,” a surreal visual sequence lets the music occupy the spotlight without any props or pomp to come between us and the rich melodies this song contains. Rustic harmonies are interspersed throughout this music video, each one as gorgeous a sight as the violent campfire flames we see in the latter half of the track are. There are no virtuosic instrumentals, frilly illustrations nor any exercises in crude self-indulgence to behold in “Devil’s In My Car;” there’s only a meat and potatoes rhythm, a homespun acoustic guitar tonality and an inspired spirit behind every drop of color that we see (and hear) in this engaging piece of folk-rock wonderment.

There’s a dreaminess to the imagery in this video, but I wouldn’t describe it as being avant-garde, or worse yet, druggy in the least. From the get-go in “Devil’s In My Car,” it’s like we’re witnessing the fragments of an evening vision being pieced together in real time, and it is only when the music in the background becomes a more dominant force than the visuals are that we realize we’re awake and consuming something that is totally organic and unimagined. The production quality is sterling for certain, but even if this piece would have been shot on someone’s old camcorder in the worst possible lighting, I have a feeling that, because of the nature of its music, this video would still be a worthwhile watch.

Patiently Awaiting the Meteorite prove to be one of Canada’s more intriguing indie acts in “Devil’s In My Car,” and with just a little more exposure south of the border, I think they’re going to take off even better than some of their contemporaries have in the past year. 2019 has produced some really big hits for Canadian rockers, folkies and even burgeoning rap stars, but if it’s a cross between vintage country and modern indie aesthetics that you’re craving the most this season, you really can’t do much better than this single and video combo. P.A.T.M. are experimenting with their artistic depth here, and the results they’re getting are more than worth your attention this fall.