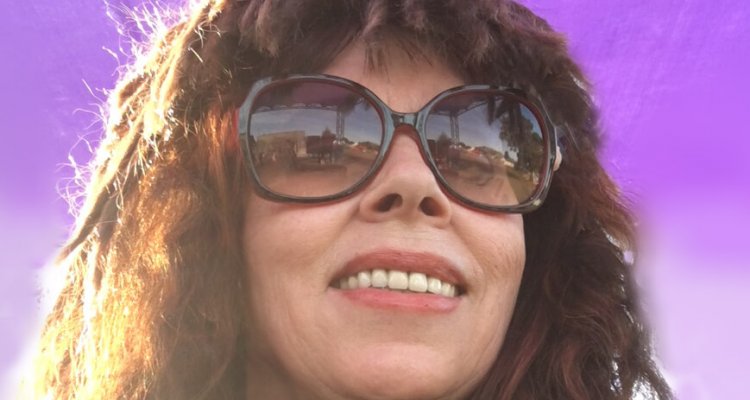 The revolutionary and rebellious genius transcended from the pop/Psyche/protest band REVOLUSHN’s writer and singer NO Mansfield can only be matched by his wife, keyboard player and video master Olga Schubert (lovingly referred to as ‘Bundles’). The bands music and videos go far beyond the limits of abstract and are typically conceptual. Enter….”Weird Little Mind” a song and video resurrected from a release launched two years ago but is so apropos of the American climate and Twilight Zone riots and protests now taking place right before our eyes.

Revolushn consists of NO Mansfield on vocals and lead guitar who has a sessions history on the records of Sir Rod Stewart, Devo, Berlin, Aretha Franklin, No Doubt, and others. He is also responsible for the design of the Mars habitat somewhere in the Antarctic. Then there is the drummer and song co-writer DeKay (aka Dave Kendrick) from the iconic bands Devo, Sparks and Gleaming  Spires. Then there is Neil Nyberg on bass, from the San Francisco punk band Nalamora, and Kim Aston on vocals who is also a vocal instructor. Last is the classically trained, Russian born, doctor in the Red Army, frog venom participant, holistic sculptor and painter, keyboard player and abstract, psychedelic video brain-child ‘Bundles’, (aka Olga Ilene Schubert).

“Weird Little Mind,” the favorite short film of Bundles is the very essence of the issues threatening to destroy the planet today and should be enjoyed while taken seriously at the same time. Symbolic Pink elephants, pink striped prisoners possessing tiny small brains instead of heads, atomic explosions, pollution and newsreels of international protests (every kind) spawn the tyrant portrayed by NO, (who is actually the very essence and voice of freedom). The film ends with the simple and urgent message, “Be Free.” The video says a lot. It’s importance cannot be underrated and therefore I had Bundles, it’s creator talk about the concept …..

There is a lot going on in this video…..

It’s my personal favorite video by the way. NO gave me full cart blanch to do the video for that song. I already had the whole scenario in my head and I was looking for a song to spit it out.

It was the time of the school shootings and those events really piss me off.  And here it was! Its like NO read my mind and gave me just the song I was looking for. I offered him the role of the tyrant and he accepted, although I wanted to do it myself because I knew how it would look and how it could be little sensitive. Say, if someone portrays me like that I would not like it either. When he watched the video he was actually upset about how he looked.

It might be mine too especially with the message it radiates.

NO looked really funny as the tyrant with red shorts, a pig nose and a puffy head. He said, “I don’t like it.” He thought that everybody would remember him like that. I explained, that it was the main and most important character and he was an actor. NO played it brilliant, super funny and he did it much more awesome than what I saw it in my head)). But there is the second part of the clip — the important demonstrations from all over the world: in the United States, Italy, Spain, Turkey and so on….  The protests represent the demands for the rights of the LGBTQ community and are anti-pollution, pro-freedom, anti-GMO, anti-mandatory vaccination, anti-big Pharma, they are against everything bad, everything that fucks us up. It begins with a developing embryo that was checked even before it was born. It’s already defined for us. The show begins. The huge mandatory hot metal stamp is ready to format our brain as good submissive slaves. Everything is ready for our arrival – our sex and sex preferences, our name, our religion, our values, our ideology, nationality, time of retirement, our life, all of that shit. Then enters this little crowned tyrant talking on a megaphone, Department X blah, blah, blah…and the next scene is all these no head creatures…prisoners in Pink striped outfits. By the way, all these creatures I played myself. Then there is the Big Enema – the great monument of our stamped freedom in the middle of the prison representing all the shit they put in our heads. If you stop the frame you will see people praying to that enema.

I’ve never seen an enema in a video, but it is very symbolic.

Agreed, especially in rock music video, I am probably the first one and deserve a golden enema prize. Ha ha  It was my doctor’s touch. Lets go back to the movie. On the cement prison walls we see these scary endless repetitive movie themes with soldiers jumping out to scare the prisoners, so they don’t venture outside their heads. It represents the media brain washing us, projecting the end of the world, the crisis, the apocalypses. It is very important to change the mass thinking. We are all responsible for what happens to us. Our thinking creates our reality. Imagine that – every one is watching the same news – in synchronic mode. Fears, wars, crisis, terror, violence, horror movies, bad news. Looks like nothing good has ever happened on the Earth since  our departure from heavens!!!  It is all poured in our heads to control our adrenaline level. They make us produce the toxins ourselves inside our bodies and it kills us. Bingo!  We become angry, unhappy, fat and sick. Because there are only two forces in the Universe – Fear and Love. One chair. One ass. We forgot what our beautiful world looks like because our heads are stuck inside the virtual havoc. They suck us into their stupid created games and we go against each other.  They make our solders die for ideology, to kill people they never met!!!!! The painted donkey and elephant go against each other! Eee!! choose the side!

They raised us as pityfull hopeless dummies, we babbling like babies – give us that and give as this. We already have it, we are the people, it is not about those tiny puppets that WE chose to run OUR business. But somehow they inflated their importance and salary and fucking scared us with an enema.

These slaves or prisoners have little brains….

At the end they do. In the beginning they don’t have brains because their brains melted under the hot stamp of society. Their critical thinking melted because of religion, propaganda, dogmas, punishment and all the crap they put in our heads. The Big Enema is a symbol of our society. We pray to something that fucks us in the ass. The next image is of a nuclear bomb followed by a desolate Earth with no people. This is followed by an image of a General who is dead. He looks like a burnt  mummy. He has a medal which is written in the Russian language and says “For bravery in war.” And then the Revolushn comes. (By the way the band’s name Revolushn is Russian spelling for Revolution). There is a pink elephant that represents free-thinking. Thinking out of the box. A pink elephant is a symbol of creativeness, power, and wisdom. Where is the greatness and the creativeness when you’re not “normal?” What is considered not normal is when you don’t follow the rules of society.

I do too…it’s so funny. I show how he’s shitting out of his ass with the crude oil all over the planet and then I show the consequences of science and technology to the earth. We fucked up everything. I show the pictures of gas in the atmosphere, the ocean polluted with plastics, dead whales on the shores…. everything is fucked up. And we are all in that, we buy a plastic bottle  — we are in. We buy fast sugars — we are in. We buy defective toys – we are in.

There is so much Revolushn in that video and so much to think about.

I am glad you noticed that. Thank you. Then I show an image of how small our planet really is in the scheme of the universe, the little rock with big TV screen. Then the pink slave pushing tons of hamburgers in the mouth of system and the systems swallow the slave at the end. Then the tiny tyrant is sitting on the shoulder of monster, created virtually to spread the fear and control us. Then when the Revolushn comes, she frees the prisoners. The lyrics are saying “I got it, I got it, I got it”… then BOOM….there’s a bell. The bell tells us “Pay fucking attention” and the demonstrations starts with the school shooting. From there it follows the demonstrations through the years back, Martin Luther King, all the political crap….all the TV programs loading us with shit. Then images of freedom fighters  – John Lenon, Rosa Parks and so on. The very end of the movie is my premonition and vision. There is a little black boy and a little white girl holding hands and running away into a green field.

It was written 2 years ago but it’s the truth for right now. It is about little dumb tyrants who lead us in a direction that we don’t like. They fight against each other and move people on the checkerboard full of mines. They have no rights to lead us anywhere. They are not our leaders and we are not bunch of dumb fucking sheep. They run our business, we hired them, we pay them. We are the people.

This is the best timing for this video to be presented to the world. The timing is right! It’s international. It’s not only about the United States. I see the same shit everywhere. The tyrant is not American. The tyrant isn’t Russian. It’s one big tyrant and we’re all wearing the pink stripes. You have to look at the video very carefully. There is a lot of symbolism regarding our current climate. I really enjoyed doing this film because this is what I think, and I wanted to express it.

You are very revolutionary in your thinking.

I have traveled all around the world. And despite all the information, and all the shit, the small groups of moneybags still control us. Money – tiny printed pieces of colored paper is the most valuable thing implanted in our heads!  The bags of useless paper choose the government. People are so naïve to think that the government wants to help them. People think the government has to give us this and that, but nobody owes you anything. You have to do it yourself. Nobody is going to give you anything like freedom and democracy. It’s impossible, it’s an oxymoron. Freedom is free.

I lived in two different continents, two polar opposite societies, and I realized it is one big show, the difference is the size of the food bowl and the heaviness of chains. Russia has one puppet to choose from. We have two??? Is that what we call democracy? I am obligated to choose one good from two bad.  Democracy would be to have one additional NoName vote. And if most votes go to NoName candidate– the  game is over – offer us a new  set of candidates.

That’s what the film is about. We are the people.