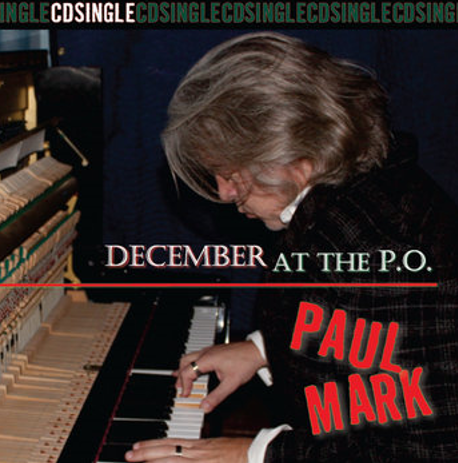 “December At The P.O.” – Paul Mark’s latest single from the Gravity LP, is a holiday story song, so if you’ve heard the album it should come as no surprise to see this released in time for the season’s greetings in 2020, a year when everyone can use the spirit. I was immediately uplifted by everything about this piece of music and words by Paul Mark, the distinguished veteran NY-based singer-songwriter. It stands alone at the end of the record and makes the perfect way out of the trappings the last song on a record can accumulate and often be the least heard track on an album.

The case for “December At The P.O.” is like that of a lead off track, and it’s really not a new thing because I’ve noticed a trend in last cuts from an album coming out among the highlights as where they traditionally never used to do that as a safer option. That is not to say this track belongs anywhere else in the Gravity album track arrangement, but it still says a lot about what was saved for last. The words of the song are semi-spoken, so it plays more like a story than a typical number.

The work of Paul Mark dates back long enough for a song like this to come easy, so there is no struggle from beginning to end, he owns it all the way. But if you are into pop music it’s not to be found on “December At The P.O.” but what is found is that of a road tested voice to go with an ageless piano prowess. That is what you get with this song, along with an interesting and enjoyable set of tales told from the post office perspective during the winter, provided by the elements.

You can hear the experience in Paul Mark’s voice, and if you read up on him you’ll find him to be of an illustrious past full of music, as well as being very educated and it comes out in his music, he is really a gem hiding from the mainstream but it has not always been that way. I was captivated by the music on the Gravity album, but this track did not stick until I got more into it and it turns out I like it as a single just as much as an album track after isolated plays of it.

The lyrics to “December At The P.O.” are tongue in-cheek lines about a mail sorter at work in December, and he came up with some great references to keep it interesting with mentions of Ben Franklin and other familiar things. The versus build up nicely and the piano playing is precision, sharp and clean behind the vocals, and the production by Paul Mark himself is also world class as well as the mastering by Bruce Barielle. This is one of the best holiday songs I’ve heard so far this year, and Paul Mark deserves top marks for it.