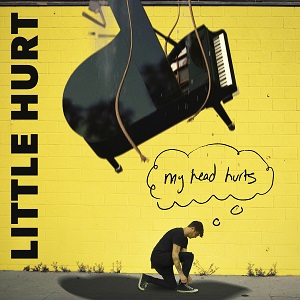 “My Head Hurts” by Little Hurt

Little Hurt’s Colin Dieden is no stranger to critical attention. His tenure serving as singer for The Mowgil’s and past releases under the Little Hurt banner have garnered him the sort of positive coverage even veteran artists crave and for good reason. Dieden’s music and writing for Little Hurt bursts out of the speakers with invigorating creativity and a relentless desire to produce work unmistakably his own. He has succeeded with his latest release “My Head Hurts” and its sound and content will win over many listeners.

It boasts immediacy you rarely hear in commercial songs. Make no mistake, this has potential widespread appeal. Dieden has crafted attention-grabbing verses and goes straight for the throat with its chorus. Such go for broke moments are the parts of a song we always listen for; Little Hurt provides a textbook lesson on getting the most out of those passages. The multiple vocal tracks are orchestrated in an effective yet tasteful way. Whatever remaining resistance you have to this song crumbles in the face of the chorus.

The video contributes to that as well. Little Hurt has crafted a compelling clip bringing together interesting visuals with the track’s lyric in an eye-catching presentation. There’s no self-indulgent visual material present in the clip; the same focus defining the song defines the video as well. The song length makes it ideal for this sort of approach; it runs under three minutes long, just under, and the fast pace of the clip’s footage makes for a gripping viewing experience.

The drumming plays an enormous role in providing the song’s energy. The production emphasizes its hammer strikes without investing it with too many studio effects. “My Head Hurts”, despite its in your face pop rock style, will work in a live setting with minimal adjustments and the nature of its chorus virtually guarantees it will be a crowd favorite.

The chorus is the song’s ultimate reward and Little Hurt doesn’t keep you waiting around for its climatic rush. If “My Head Hurts” is nothing else, it is to the point – the chorus doesn’t pull its punches in any way and provides listeners with the track’s unquestionable peak. The overall construction of this cut is superb. There is an inexhaustible amount of common sense in the way “My Head Hurts” transitions from one section to the next and listeners will be hard pressed to spot any daylight in the way Little Hurt tackles this track.