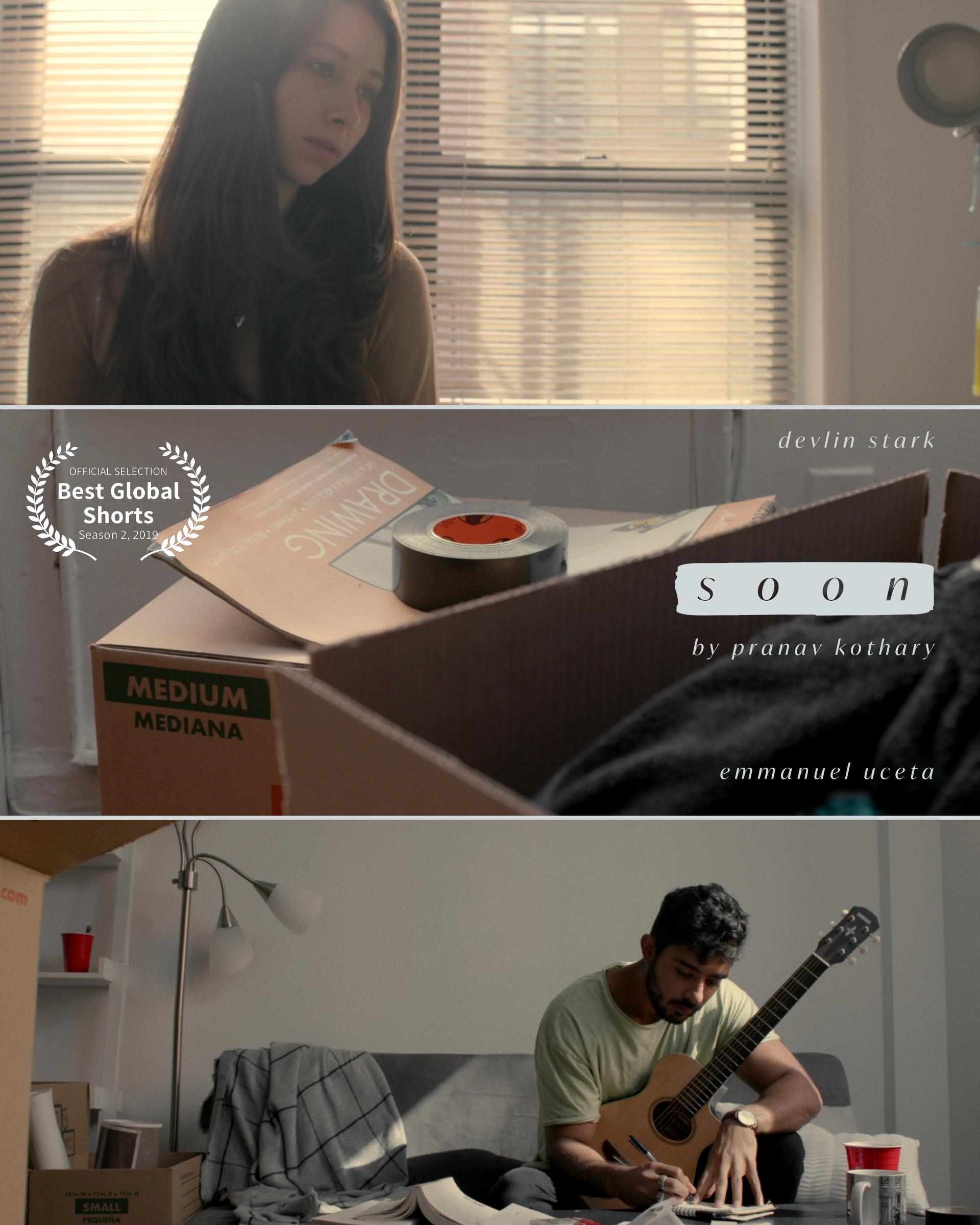 Commenting on Soon Pranav said: “Soon is a film about memory, and the role a physical space plays in both its collection and its reminiscence. I wanted to put on display the loss of a piece of life one may experience when losing something as seemingly unimportant as a physical space. I wanted to showcase the beautiful, chaotic dialogue that memory and space sometimes have in moments of life.”

Director Parnav Kothary created his short film Soon as a means to provoke insight to the feeling and sense of loss, or memory of what was lost, even if it’s loss of something as simple as the loss of a physical space. This melancholy short begins with a songwriter, EM who has packed his belongings and is now preparing to leave an apartment in New York for a career as a songwriter in another state.

The story is intriguing and thought provoking. The ending provides enough of a twist to make the viewer walk away thinking about memories, and what was meaningful in life. Kudos to the storyteller and the director for providing a simplistic perception of an appreciation for the small things in life.

The set is a modest apartment which a young man, who has a career potential ahead of him, is getting ready to vacate. His girlfriend, or we can assume she’s his girlfriend, enters and carries on a casual conversation with him. From their conversation we understand that his departure is for a variety of reasons, but mostly to pursue a career, though he himself thinks modestly about the opportunity.

The camera work is candid, and free hand, which allows for an intimate experience as though the viewer is in the apartment with Em and Lisa joining them in their conversation. Lighting and coloring is subtle, complementing the simplicity of the story. Not dark, which would have suggested grief, and yet ambient enough to express gravity so that we sense a passing sadness, as though packed boxes and lost friendships will soon be replaced. There’s a somberness that reminds us what once was, will soon be but a memory.

Emmanuel Uceta (Em) and Devlin Stark (Lisa) are two friends who are saying goodbye.  The seriousness of Em, a songwriter comes across well. The vocal and accompaniment are beautifully done and the song lovely and heart felt, providing an emotional conclusion. Lisa sings it beautifully. The sound itself could have been improved but for a low budget film it was on par.

The only drawback I found was the performance. The acting lacked passion, however, and had more potential than what was displayed. I sensed an overall unconcerned and non-commitment to the couple’s departure especially in facial expressions. Lisa, as lovely as she is, continually wore a smile and so it left us wondering what she felt about Em’s departure. The body language was natural but failed to pull more emotional intrigue. There was nothing negative about the acting, it simply lacked as much drive as it could have had.

The interesting dialogue skipped from different subjects in a believable and normal fluidity, displaying a believable daily life of the two subjects. This dialogue gave a frankness and honesty to the film.

In conclusion the short film Soon directed by Pranav Kotharyis a well done, a mildly provocative film that stimulates thought and entertains the viewer. A sweet seven minute story worth the watch.