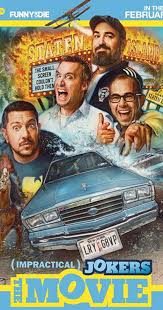 What happens when the funniest humans on the planet decide to participate in a movie?  Then what happens when Caleb age 13, Gabriel age 11, and Seraphina age 9, confess that The Impractical Jokers are their heroes and on a school night they get the chance to see Joker Joe Gatto in person at a 9:30 pm show at Loews Theater in Stony Brook? Well…. you temporarily kidnap them and take then knowing that the movie doesn’t end until at least 11:30. Knowing that there is no way that any of them will ever wake up in time for school the next day but allowing them the chance to meet one of their idols you take them anyway and hope that it’s worth the consequences….

Not more than two minutes after their arrival Joe Gatto marched down the corridors  of the theater, gave Gabriel a high five, and said hello to the other two. By the time 9:30 rolled around (a last minute added show as the others were sold out), the audience’s anticipation was rising ferociously. Joe didn’t disappoint….and neither did the movie!

The film starred Joe Gatto, Brian “Q” Quinn, James “Murr” Murray, Sal Vulcano, and icon Paula Abdul. Directed by Chris Henchy the storyline concerned a high school mishap that caused the Jokers to take to the road competing with challenges via hidden camera for a chance to redeem themselves.

Five minutes into the film my mascara was running down the sides of my cheeks and uproarious laughter filled the theater. A brief identity with the cosmos brought the house tears of joy and a common hysteria that became even more magnified as the film progressed. The Jokers AKA The Tenderloins have always taken “dares” to an outrageous level, a realm of hysterical insanity as the guys compete for the best outcome under pressure. The loser of each episode must undergo the most mortifying challenge. Such challenges have ended in permanent tattoos, cleaning up elephant shit, skydiving, as well as the most embarrassing things known to man. The film wasn’t much different, except Paula became included in the madness.

The Jokers were able to keep their challenges authentic as those on their show. You felt their embarrassment, their fear, their joy in seeing the others break under pressure, and you absolutely loved it. The film is a celebration of The Impractical Jokers, with cameo appearances not only by Paula Abdul, who the jokers were fans of in high school, but  also Jaden Smith, Joey Fatone, and Jiggy, a comedian who often opens for them on tour.

This film is an essential if you like to laugh and keep laughing until your mouth freezes and your stomach hurts. For those who still aren’t familiar with the quartet it’s time you become so and the film is a perfect vehicle to do it. As for the kids half asleep on the ride home….they all changed their name to “Larry.”