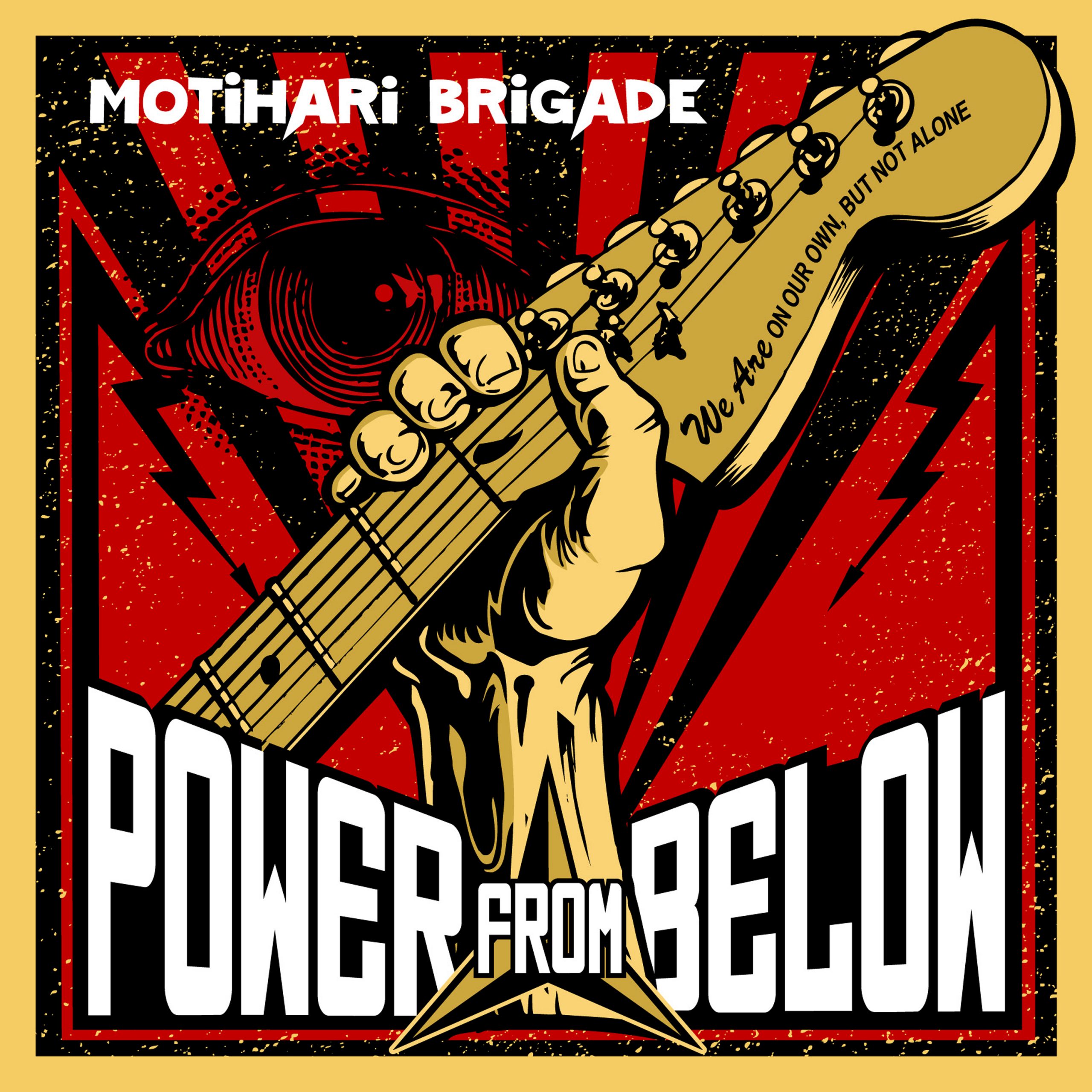 For rockers Motihari Brigade, making a powerful album from start to finish is a lot like cooking up something tasty in the kitchen – it’s all about following a seasoned but uncopied recipe distinct from everyone else’s. First, they start off with some swaggering vocals, most prominently found in the title cut, “Hold On (Eyes On The Prize)” and “Buy This Product,” then, they add in a bit of guitar machismo in “Revolutionary Sweetheart,” “Waiting For The Revolution” and “Which Side Are You On,” and finish off the brew with a whole lot of underlying attitude in the beats of “The Invisible Hand,” “Power To The People” and “Talking To Crazy.” From “The Flood” to “The Leader,” there’s scarcely a moment in Motihari Brigade’s first studio album Power From Below where we aren’t feeling the crushing intensity of a band playing at full power, and though it can’t be said that they’re breaking any new ground from an aesthetical point of view in its eleven songs, their treatment of a familiar hard rock formula is one that I would recommend to music fans young and old alike this season as a much-needed breath of fresh air.

While the production quality of this LP is far from cheap or thrown together, Motihari Brigade were clearly careful about what they decided to include with regards to bells and whistles in their debut album. There’s no fluff in these tracks, and to be perfectly frank, none of the shorter songs feel like throwaway filler much as the longer tunes don’t come even close to sounding like jam sessions that might have been tacked-on to fill out the tracklist here. Muscularity dominates the melodies in “Talking To Crazy” and “The Flood,” and even in the exotically stylized “Power To The People,” there’s not enough space between the different instrumental components for even the most leering of critics to accuse the band of putting up a sonic front in this record in the least. I would have to hear them in a live setting to be 100% certain, but if this is any sort of an indication as to what kind of a sound they would have on the stage, I think they could qualify as one of the meatier melody-makers I’ve come across in the young year.

I hadn’t heard their work before, but now that I’ve given Motihari Brigade’s Power From Below a sampling for myself, I’m absolutely curious to see where their creative trajectory takes them next. They’ve got a solid sound for sure, and if they’re able to get any of these tracks into steady rotation anywhere in or outside of the underground in 2020, they’ll have a good shot at carving out a path all their own as the decade comes into focus. Power From Below is an exceptionally black and white album, but for all that it lacks in revolutionary thought it more than compensates us for in sheer physicality, which is something that has felt increasingly hard to find among rock groups in the last ten years or so. I’m intrigued by this LP’s contradictory charisma, and I highly doubt that I’m the only listener saying as much.