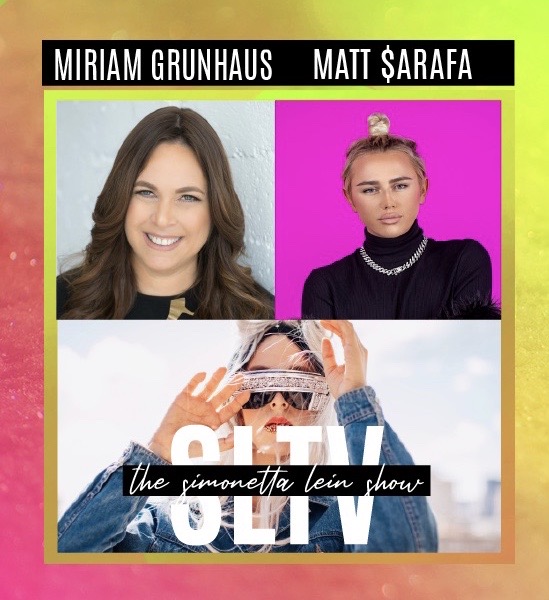 Miriam Grunhaus and Matt Sarafa from Mikah Fashion guest on The Simonetta Lein Show on IGTV.

Miriam Grunhaus is the fashion designer founder of Mikah Fashion.

We want to empower women to accept themselves with their imperfections and limitations. We encourage women to “wear their scars” with pride, to understand that each one of us is a unique work in progress. We want women to know they are beautiful, not despite their circumstances, but because of them. We want to empower women to own their struggles and with that ownership, to claim their strength. We hope our clothing will remind women of their strengths and unique gifts. You can transform your life into a joyful and rich experience, regardless of what has happened in the past.

In Japanese culture, broken vessels are not discarded or rejected; rather, they are repaired with lacquer and gold or silver. The end result is more beautiful, valuable, and stronger than the original. The message is that “broken” is not a reason to be thrown away but rather an opportunity to improve and transform. This art form says that through the process of mending, we become even more lovely and exceptional than before. Our apparel is an interpretation of this revered Japanese art. We hope to inspire women as they wear our pieces, as well as inspire those who see our attire on them. You’ll discover a meaningful and wearable message behind our designs.

Matt Sarafa is a Los Angeles based 22 year old celebrity fashion designer and reality television personality best known for his appearances on the Real Housewives of Beverly Hills and Project Runway Junior. As the youngest designer to have ever shown at New York, Paris and LA Fashion Week, Matt has come a long way since he started designing at age 7. Matt is a full-time college student at UCLA in addition to running his own company and dressing some of the biggest names in Hollywood such as Tyra Banks, Iggy Azalea, LisaRaye McCoy and many more. The Matt Sarafa brand has been published by prestigious media outlets including Vogue Germany, Vogue Espana, Teen Vogue, Forbes, Harper’s Bazaar, Elle, Galore and countless others.

The official website for Mikah Fashion may be found at https://www.mikahfashion.com