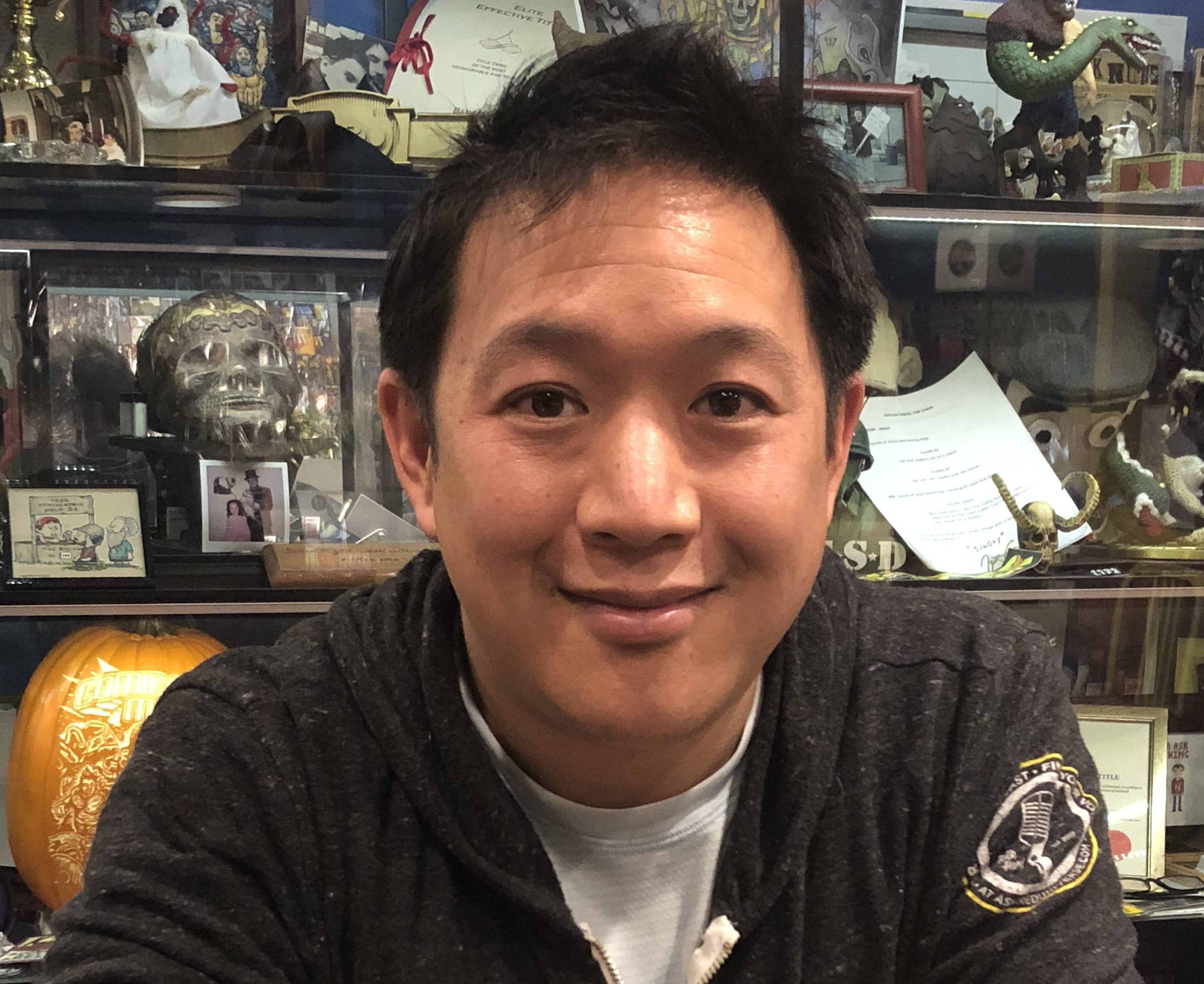 Ming Chen and The Secret Stash

This past weekend I found myself, with help of my friend Celeste, at the famous comic book store owned by writer/director, Kevin Smith, in Red Bank New Jersey called the “Secret Stash”. The store houses the men from AMC’s former Reality Show, “The Comic Book Men”, an unscripted show capturing the camaraderie between the shops employees and their customers. The show aired from 2012 to 2018.

Ming, one of the “Comic Book Men”, professed his undying love and fascination of comic books, science fiction, pop culture, and conventions. He is also involved doing a popular podcast. I decided to pick his brain and see if I could delve into his mind and learn about the fandom of the comic book world.

Ming, introduce yourself and tell the world what you’re doing here.

My name is Ming Chen. I am most well-known from the AMC show, “The Comic Book Men”. I am also a podcaster. I have 2 podcasts. One is called, “I Sell Comics”, and I do that with Mike Zapcic who also works here in the store. Then we have another podcast called simply “The Ming and Mike Show”.

Let’s start with “The Ming and Mike Show”, what’s that about?

We travel the country going to conventions, having adventures, we get into trouble… we started with “I Sell Comics”. New comics come out every week and we read most of them. We tell people which they should read and why we like them, and then we started “The Ming and Mike Show” so we could talk about whatever the hell we wanted. Occasionally we have guests, we have creators, we have people in the pop-culture world, and we have friends.

How can people get to hear the shows?

They can go on iTunes or google play or anywhere you can find podcasts.

So you’re pretty famous in the comic book world?

I met Kevin Smith who owns the store that you’re sitting in now and who is a pretty well-known film maker, and who a lot of people like. He speaks to people. I met him in 1996, and up until currently I’ve been working with him for 23 years now, and through that he’s introduced me to his world of pop culture, comic books, and podcasting. Then he got me on his show called “Comic Book Men.” It ran for 7 seasons on the network AMC. So I’m the Asian, all the other guys are white, and I’m like the spice or the flavor. We all like comic books but Asians have latched on to them.

Who are your favorite celebrities in the world of pop culture, comics and films?

For me it would be Mark Hamill. I grew up with Star Wars. It’s like a religion to me. Would I wait in line 3 hours to see Carrie Fisher. Yes. I was lucky enough to get her autograph before she passed away. Whether it be movies or comic books or music, whatever your passion is, it can overcome you.

A lot of it is, if someone speaks to me, maybe it’s someone who is inspired by superheroes you always look up to, you want to emulate them…..I was like Peter Parker from Spider-Man growing up. In school no one paid attention to me. I didn’t really get pushed around, but I was pretty invisible. Who doesn’t want to get bitten by a radioactive spider and fight crime at night wearing a Spider-Man outfit? Who doesn’t want to run around in a high-tech iron suit and fight crime to save the world? A lot of it is escapism. I love science-fiction, fighting aliens. Who doesn’t want to fly in a spaceship and blow up the death star? I mean that’s fabulous. Growing up as I sat in my minimum wage job frying fish and french fries of course I would be off flying an X-Wing fighter, fighting with light sabers or doing battle with swords like on Game of Thrones. It’s escapism. Guys like me we tend to have pretty big imaginations. We like other imaginative people who can create these worlds. They come in many formats such as comic books, YouTube, Netflix TV shows and movies, and then the Marvel comic book movies.

Do you have a favorite comic book?

It’s hard to say. I love them all. There is a comic called “Why the Last Man” about the last man on Earth, which is pretty great.

Do you have a favorite SCI-FI movie?

The Star Wars Trilogy, the original is one of my favorites. I love anything James Cameron does. Aliens is probably one of my favorite sci-fi movies. Ghost Busters is definitely up there. Back to the Future is definitely one of them. The list goes on and on, I have many. It’s cool because in our days everyone else loves them too so you can have conversations about them.

So we are sitting in this very famous store, tell everyone to come…

I would definitely come to this store. Secret Stash is the former location of “The Comic Book Men”, owned by filmmaker Kevin Smith. It’s the greatest comic book store on the planet. I am in and out of here all the time and then I go to conventions all over the world.

Do you have a fan base?

I like to think so. It’s a small one. The geeks, most of them know who I am, which is cool…