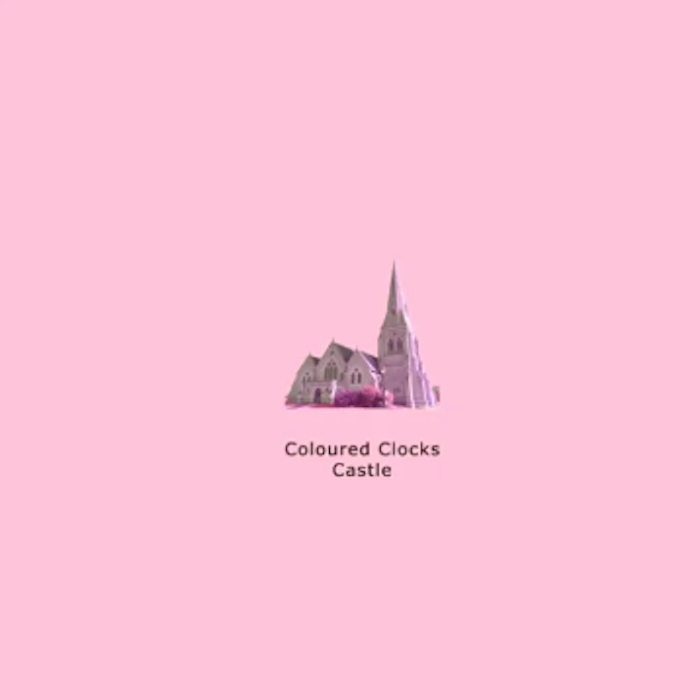 The latest release from Melbourne’s Coloured Clocks, Castle, comes on the heels of its well-received predecessor 2021’s The Floral Emblem. It continues mining the same psychedelic pop vein heard on that release without retreading familiar ground. This is no small thing in modern music. Rather than simply regurgitating past glories, Coloured Clocks records distinctive music with each new release. It is a sprawling thirteen song collection, yet there aren’t any lulls. Mixing dream-like pop with Coloured Clocks very personal songwriting produces music certain to resonate with many listeners.

A wavering synthesizer swell opens the first song “In the Castle” before we hear the first vocals. Lyrical piano appears as the song begins in earnest and the gentle mid-tempo pace allows listeners to fall into Coloured Clocks’ musical vision. It segues into the second track “Universe” and the band’s gift for crafting earnest, but never maudlin, love songs sets them apart. The third song “Flightless Tigers” is one of the album’s early highlights and has a strong mid-tempo pace. It likewise has the same plainspoken lyrical acumen Coloured Clocks excels at and compliments the music extraordinarily well.

The band’s gift for melody is clear. Coloured Clocks, however, understands their music benefits from well-chosen moments of physicality. “The Future Love” has their customary strengths on display, but also has an up-tempo pace as well as a strong backbeat. These are compositions that, as well, revel in hitting listeners with unexpected turns. Those moments, however, are never gratuitous and further strengthen the performance. “The Future Love” has such moments as well. It segues, as all the tracks do, at once into “Only Lonely”. There are several inventive rhymes scattered throughout the song and the vocal phrasing gives them the needed snap.  There are dazzling synth fills included in the track as well.

“Sun and Lightning” has a luxurious pace with excellent drumming serving as the song’s foundation. Coloured Clocks shift gears during the track and vary the tempo – songs such as this are mini-pop symphonies with different interlocking passages amounting to an imaginative whole. The album’s centerpiece, however, comes with the track “Castleworld”. The song’s length, nearly eight minutes long, dwarfs the other album tracks and there’s excellent guitar work present throughout the track. Working on a much larger canvas, however, doesn’t strain their musical vision at all. It unleashes creativity, instead, and listeners will enjoy this multi-part mini epic. It never exhausts your patience. Instead, it’s a mesmerizing display of the creativity underlying the band’s music.

The album’s penultimate song “Tore Me Up” has the same soft-hearted melancholy permanenting much of the material, but Coloured Clocks’ melodic grace redeems even the saddest of moments. There are tasty guitar fills woven into the song that enhance the specialness of the song. The finale “Von” is everything you would expect from Castle’s closer. The album’s second longest song has a valedictory mood, a feeling of leave-taking, yet keeps enormous uplift thanks to Coloured Clock’s abiding gift for melody. The conceptual tilt of this release cannot be ignored. Coloured Clocks’ ambition is obvious though never overbearing – instead, they are responsible for writing and recording an astonishing full-bodied work.