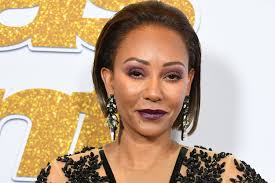 Pop star Mel B is proud of the way Eddie Murphy has welcomed their daughter into his family after initially denying paternity of the child.

The Spice Girls star dated the comedy legend for nine months in 2006, during which she fell pregnant.

The couple had split by the time Mel gave birth to Angel Iris in April, 2007, and Eddie initially claimed he was not the baby’s daddy, until a DNA test proved otherwise.

Despite the rocky start to the father-daughter relationship, the actor, who welcomed his 10th child last month (Nov18), has since made an effort to be present in Angel’s life, and even invited her to be a part of a holiday photoshoot for the Murphy family Christmas card.

In a recent interview with syndicated columnist Allison Kugel, Mel said, “Angel’s 11 years old and she sees her dad on a regular basis. She’s actually going to his house next week to do the family Christmas card, which is really lovely.”

The singer, who recently declared Eddie was the love of her life, revealed the news as she discussed how she manages co-parenting with each of her three girls’ fathers.

Recalling how her first child, daughter Phoenix, had to be shuttled back and forth between Mel’s house and that of her dad, dancer Jimmy Gulzar, she shared, “My oldest is 19, so I had to do every other weekend and certain weekdays for 18 years, and there’s a point where your 14 or 15 year old doesn’t want to go to her father and that’s a difficult task.”

She’s also had to endure a nasty custody battle over Madison with her second ex-husband Stephen Belafonte, from whom she split in 2017 after 10 years of marriage, but Mel claims she always does her best to ensure her girls look forward to spending quality time with their dads.

“I’ve never said a bad word about any of their fathers to my daughters…,” Mel insisted.

“One thing that is mandatory is that I always make it a very exciting thing when I send them off to their fathers. Angel is different, because me and her dad don’t have any problems with each other. With Madison, they take everything in, so I try to make it exciting for her, even though I obviously have huge issues with her father.”

Following the couple’s separation, Mel accused Stephen of subjecting her to years of mental, emotional and physical abuse – allegations he has vehemently denied.