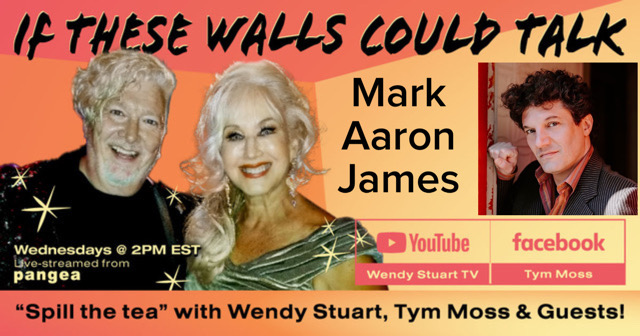 Mark Aaron James will be a featured guest on “If These Walls Could Talk” with hosts Wendy Stuart and Tym Moss on Wednesday, June 29th, 2022 at 2 PM ET live from the infamous Pangea Restaurant.

“It’s my favorite song about a kleptomaniac girlfriend…Aquaman…The Antiques Roadshow, I hope it’s yours.” That is New York based singer/songwriter Mark Aaron James introducing a few of his quirky takes on universal themes. Borders News labeled these innovative songs, “Some of the best and most introspective pop music we¹ve heard in years.”

Born in California and raised in Cocoa Beach, Florida, Mark Aaron James seemed an unlikely candidate for the Nashville songwriter scene. With a strong pop-rock background in tow, he enrolled in Music City’s reputable Vanderbilt University and soon became a popular fixture on the “porch party” circuit that years earlier supported the Indigo Girls, Ben Folds and Hootie and the Blowfish. Mark brought that following into the local venues where the famous “in the rounds” gave him a new challenge. Now sharing the stage with Nashville’s hit writers, Mark realized, “If you don’t have a song as good as the writer before and after you, then you are the bathroom break. It really provoked me to focus on craft, along with inspiration.” The results lead to co-writes with top songsmiths and his compositions being performed by everyone from Jimmy Buffet to the World Peace Choir.

The year following his critically acclaimed indie release, Mr. Wirehead, Mark was awarded “Best Local Songwriter” and “Best Up and Coming Band” in the The Nashville Scene’s Reader’s Poll. In the weekly mag, owned by NYC’s Village Voice, Mark beat out John Hyatt, Lucinda Williams, Steve Earle and several other luminaries. With the release of his second CD, Adventures With A Plastic Bag, he earned both awards again the following year. The title song from that CD went on to make the top 100 songs of the year on Nashville’s WRLT Lightening 100, gaining airplay on Atlanta’s 99X and was added to 126 CMJ reporting stations, breaking the top ten in 12 markets.

Despite this success, Mark was regularly reminded that he was a rock singer in a town known for country music. After playing well received shows in New York’s Living Room and being featured on PBS’s CD Highway and I-Dig’s Rawdio programs, Mark decided it was time to make New York City his home base.

Moving in 2001, Mark began headlining in venues as varied as the Living Room, Rockwood Music Hall, The Bitter End and the Westbeth Theater. New York’s Underground Music Organization (UMO) voted him one of the “Top 14 Singer/songwriters in Greenwich Village,” and featured him as the opening track on their annual CD. With the completion of his next CD, Just a Satellite, Mark’s song “June 17th” was included in “Lost.”

Mark returned to NYC in the summer of 2010.  Since his return the “Worlds of Warcraft” animated video for his song “Aquaman’s Lament” on the “spiffworld” YouTube page continues to average thousands of hits a day. The CD “Throwing Shapes” was released in 2012, once again garnering great reviews. While touring for the project, Mark was honored with an invitation to perform a Christmas concert at the White House in Washington D.C. A recording of that show was released as a holiday album benefiting the American Red Cross. The follow-up to his critically acclaimed 2015 CD, Play Harder, resulted in more glowing reviews and a successful tour through Japan and Singapore. Mark’s most recent project is the first nationally distributed album only physically available on a USB Stick, (It is also available at all regular digital retailers). “My Mighty MAJic Stick” was released in May of 2017.

In 2019 Mark wrote the music and “book” for a new musical, HERO: An Origin Story. The show was selected by the New York Musical Festival, and was performed several times at Playwrights Horizons on 42nd street. It was voted runner-up for Best Reading at the festival. While continuing to tour with his music, Mark is currently working on bringing HERO back to the stage in New York, and abroad, while writing a follow-up show, as well. Updates on both can be found via his social media links throughout this page.

Watch Mark Aaron James on “If These Walls Could Talk” with hosts Wendy Stuart and Tym Moss on YouTube here: