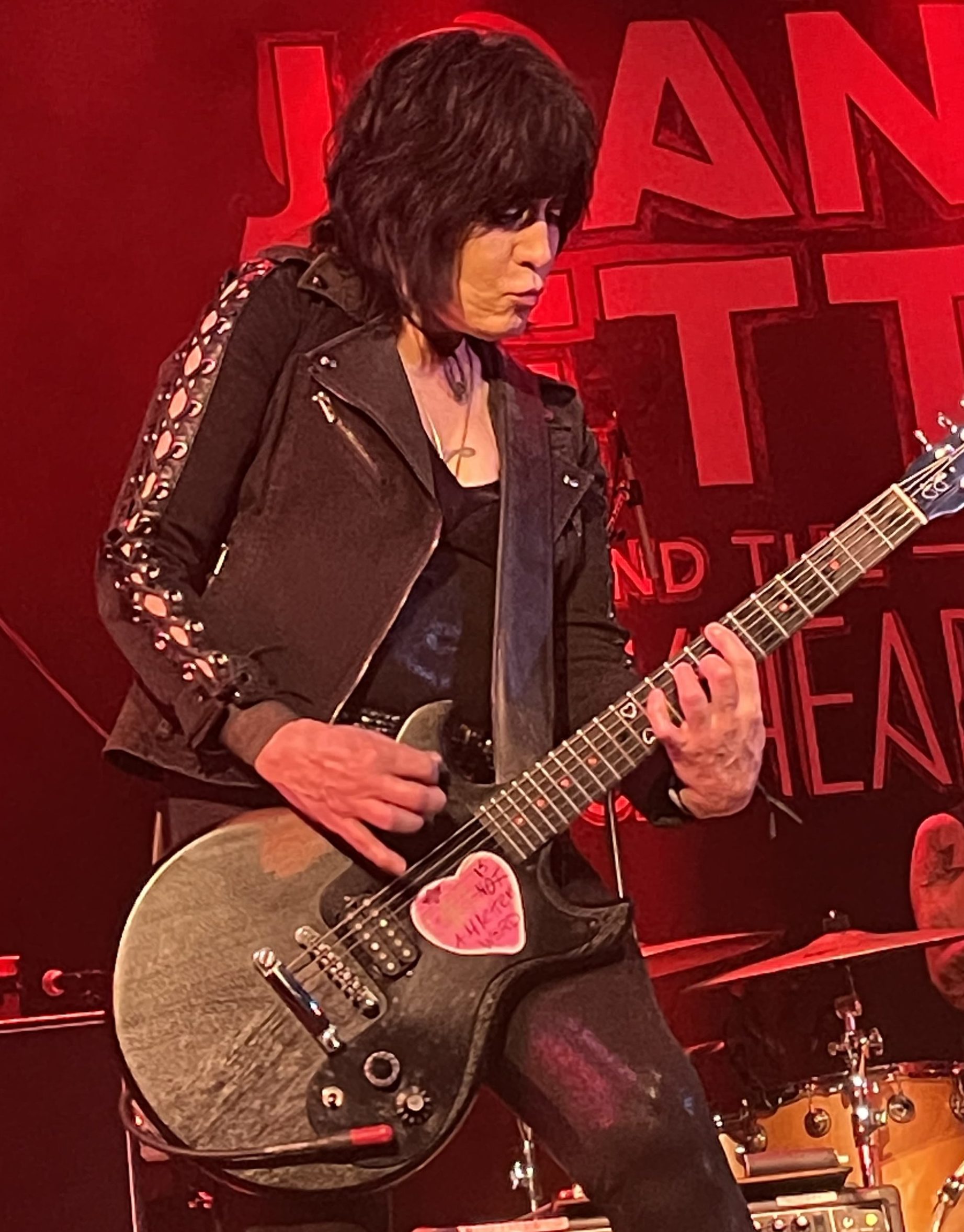 Joan Jett goes far beyond the ultimate rock star. Like a raging tsunami preparing to combat the world’s arrogance or a sparkling dazzle lighting up the planet like fireworks plunging into the night sky and shattering the darkness, Joan Jett & The Blackhearts captured the stage at The Ridgefield Playhouse in Ct.

Their first song “Victim of Circumstance”, followed by “Cherry Bomb” (pre- Blackhearts and post Runaways),and “Do You Wanna Touch Me” synchronized the scene for a 75 minute extravaganza of songs set in a rock n roll laced with the threat of sophisticated anarchy that couldn’t be challenged by angel, man or beast. The Rock N’ Roll Hall of Famer followed those songs with her mega hit “Bad Reputation” to which the collective effervescence rose from their seats and danced in the isles and took refuge in familiar echoes.

As rock royalty Jett has a career that threatens the longevity of the Queen of England herself. Throughout her career with her beginning band “The Runaways” and then her solo/Blackhearts and Kenny Laguna triumphs, Jett lives her point of view while resisting every rule and challenging every regulation. Aside from being inducted into The Rock N’ Roll Hall of Fame Jett has earned awards and honors including Rolling Stone’s 100 greatest guitarists of all times, Long Island  Music Hall of Fame, West Hollywood’s Rock Legend, and many others recognizing the fact that she is for sure a global phenomenon.

Her set continued with “Soulmates”, “TMI”, “You Drive Me Wild”, “Light of Day”, “Fake Friends” and then like a seductive alchemist transforming private anguish into a narrative of truth she sang “Androgynous” leading the congregation into an enforced visit to an imaginary realm. She continued her set with “Woe Is Me”, “Coney Island”, “Love Is Pain”, “Go Home”, and “Fresh Start.”

In mid-stream longtime friend and manager of Jett, Kenny Laguna gave a touching and heartwarming shout out to superstar author Howard Bloom who is considered to be the best press agent in rock n’ roll history. Bloom represented Joan Jett along with hundreds of other icons including Michael Jackson, Billy Joel, Prince, Queen, Bette Midler, Bob Marley, Aerosmith, Alice Cooper, Billy Idol, the list is endless. Jett also wrote the forward to his book Einstein, Michael Jackson, and Me.”

Then in a climatic, orgasmic, kaleidoscope of vibrancy, Joan Jett and The Blackhearts brought it home with “I Love Rock N’ Roll”, “Crimson and Clover”, “I Hate Myself for Loving You”, “Longtime”, and finally “Everyday People”, and the arena went wild.  It was similar to embarking on a spiritual quest where God herself propelled the chariot of fire. Joan Jett and The Blackhearts left us with a cluster of song all clinging together in the middle of the heavens.