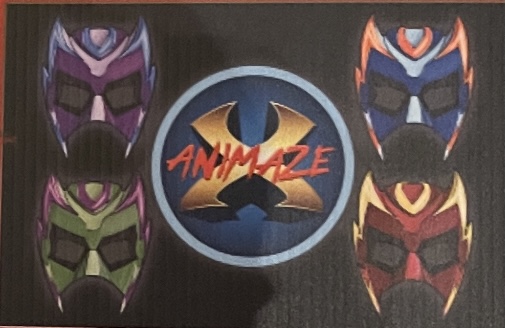 “Christmas is the day that holds all time together“….Alexander Smith

Christmas is a truly joyous time of the year… With sparkling snowflakes and twinkling lights, rosie cheeks, good cheer, warm fuzzy feelings and an AniMazing X Mas. With a
magical showcase every day from now until December 30th @11:00 AM held at The Theater Center Jerry Orbach Theater (210 West 50th Street), children and children of all ages can join in the merriment of a Rockin’ Christmas….

AniMaze X is a rock n’ roll anomaly. The heavy metal band with a twist of comic book heroes, Broadway tunes, cartoons, movie soundtracks and a riveting theatrical presence is composed of lead singer Mike Verscera, John Bruno on guitar, Yanni Sofianos on drums and Willy Mosquera playing the bass. Garbed in bright colored masks and looking like superheroes themselves AniMaze X is a jubilant and vibrant faction bringing the Christmas spirit to all with songs including “Jingle Bell Rock”, “The Grinch”, “Rudolph The Red Nose Reindeer”, and “Santa Claus Is Coming To Town” all performed in a way as never heard before.

AniMaze X it’s a project started by the members of bestselling D-Metal Stars/ AniMetal USA. AniMaze X is signed to Tribeca Records and has appeared most recently on the iconic children’s show “Wonderama.” Their extraordinary performance is fun and lighthearted and will leave a unique memory for years to come. The most unusual Christmas show on Broadway and in New York City itself the AniMaze X Christmas Show will remain in the children’s hearts forever….

Aside from AniMaze X Santa himself traveled from the North Pole to make a very special appearance and accompany the band on the stage as he danced around and made merry. Even the plainest faces came alive with promise and joy. Joy is not felt less exquisitely because the moment flies by. Some Christmases become more memorable than others, not because they surpass others but because the light shines from another source.