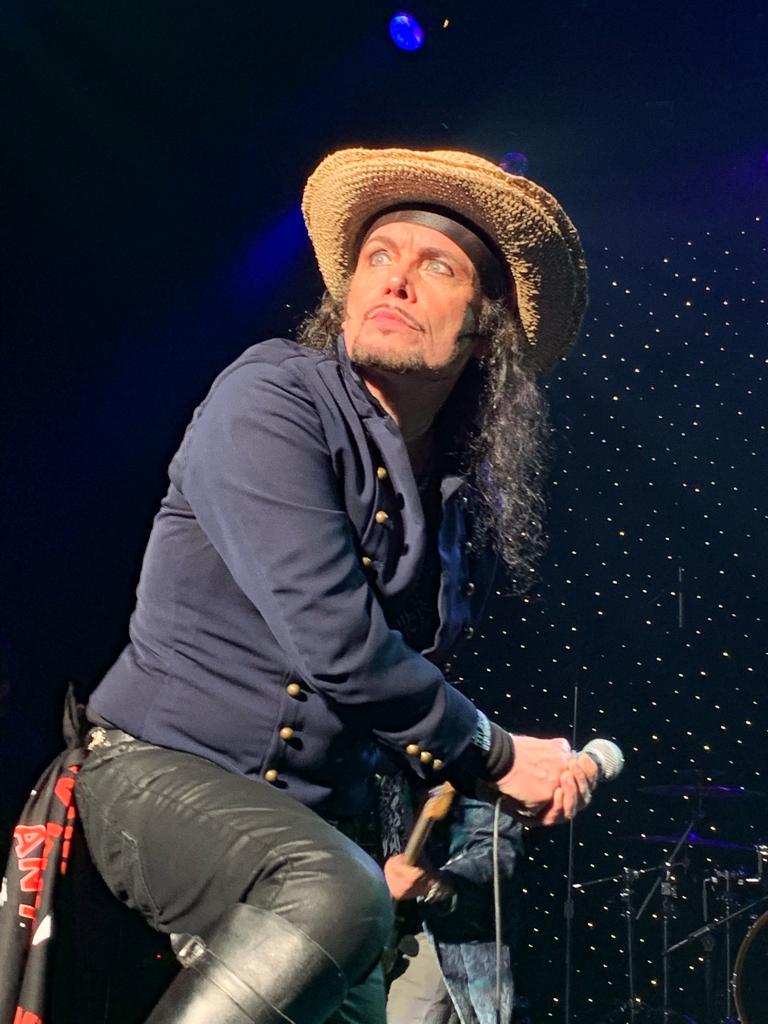 Much like the Adam in the 80’s minus the war paint, the extravagant stage sets: pirate ships, massive fish bowls, and the safety pined, tattooed, liberty spiked, defiant mosh pit, Ant still captured the stage and the hearts of the audience. Performing his solo debut landmark album, “Friend or Foe” in its entirety,  released in the summer of 1982, a more refined, “Goody Two Shoes” emerged, as fit as ever, packing the same punch.

“Spawned from Blitz, punk rock’s better dressed off-shoot, Adam Ant was often accused of favoring style over substance by his harsher critics. Others credit him with putting some parody as well as some poof into what had become the lifeless punk scene”..Steve Gdula.

With an electric flamboyance, and the proper attitude still in place, Adam seemed to up his 80’s game with a vocal fluidity and clarity, backed by a tight flawless band, all pretty and accomplished. The “Fox Theater”, inside the glitzy Foxwoods Casino  in  Connecticut, was completely filled with loyal and adoring fans, many following the East Coast tour from city to city. One dose of Adam tends to unleash an addicting essence and effect.

After completing the integral album, ending with a glowing feature guitar solo from Will Crewdson, on “A Man Called Marco”,  Adam continued his 2 hour performance with selections from “Dirk Wears Whit Sox”, one of the most under-rated records in music history. Included in the after-set was his “Top of the Pop’s” break out song, “Dog Eat Dog”, his notorious “Kings of the Wild Frontier”, the iconic “Stand and Deliver”, “Beat My Guest”, (the favorite of former guitarist Tom Edwards who sadly died while on tour), the playful “Strip”, and the charming ‘Prince Charming.” Adam climaxed with a three song finale, “Press Darlings”, “Red Scab”, and “You’re so Physical”, which afforded guitarist Will another majestically, overwhelming solo.

Adam easily showcased all his signature moves and gestures, barely standing still all night, yet pausing to touch  the hands of those fans plastered against the front of the stage and even kissing the hand of one lucky girl. He introduced the songs with a whimsical ambience and included colloquial, Wild West sounding expressions. Definitely one of Adam’s more animated showcases as of recently. The anticipation mounted as the audience awaited the moment he would throw his bandana into the crowd….

The band including guitarist Will Crewdson, bassist Joe Holweger, A.P. Leach, guitarist, drummers Andy Woodard, and Jola, created a full sounding accompaniment, successfully compensating for the lack of brass originally on the album. In fact the rawness of the guitars and double drums ( in some cases 4 drums ) created an infectious destiny.

The evening was a blast and no one left disappointed. Adam is a nominated Grammy artist, and one of the most original, avant-garde entertainers of all time. Once voted “The Sexiest Man in the World” by MTV., he continues in that fashion, and maintains his indispensability in the music industry.

Adam Ant will be touring in the U.K. in November and December and has just announced another US  “Friend or Foe”, tour for 2020 of which pre-sale tickets are set to go on sale today and continue through the week. For more information please visit http://www.adam-ant.com