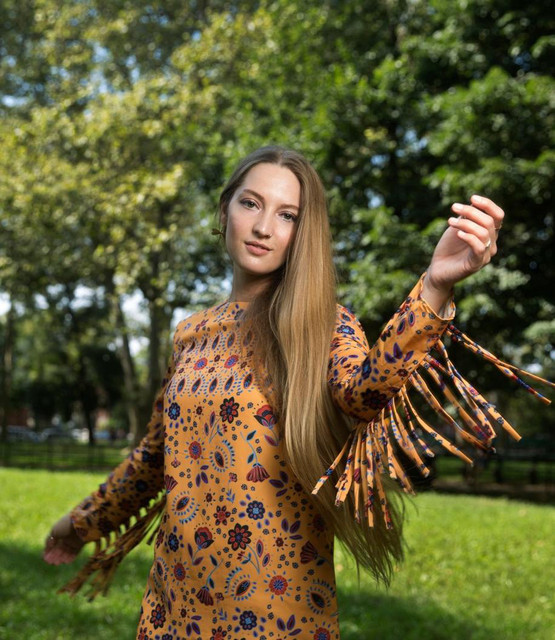 We stare down a black and white-saturated street at the onset of the new music video for Lexi Todd’s sensible pop single “Window Shopping,” but it isn’t long before Todd herself comes strutting down the sidewalk, her virtuosic, jazz-inspired vocal triggering a flood of color that washes over the screen instantly. There’s a confidence to her walk, a charismatic glow to her gaze, but once she starts to sing it’s difficult to keep up with anything that’s going on around her in the video. She’ll soon encounter a photographer who’s more than willing to take a few shots of her atop a bench and share a dance under the autumn sunlight, a phone-distracted new friend who can dish out as seamless a step as Todd can, and a rich urban backdrop that is arguably as evocative and spellbinding as any of the characters in this piece are. Lexi Todd is utterly charming and aesthetically unguarded in “Window Shopping,” and personally I think I would have to rank this track and its stunning video among the smartest releases she’s attached her name to.

The music video for “Window Shopping” is a wonderful watch (particularly when considering just how dismal a season it’s been for similarly-stylized content out of the mainstream and underground alike), but the real star is undisputedly its soundtrack. The gentle percussive nudge that starts off the song is reminiscent of a nervous lover’s heartbeat, while the textured guitar melody is possibly more humble and homespun than any I’ve heard all year long. There’s a slight contrast between the cutting vocal attack that Todd employs here and the rather airy instrumental melodies in the background, but it doesn’t create a discordant harmonization at all – in fact, quite the opposite.

There’s a multilayered feel to this single that I haven’t found in a lot of pop music recently, and it goes well beyond the role that the master mix plays. Compositionally speaking, this is probably the most complex and artistically-demanding song that Lexi Todd has recorded thus far in her career, but rather than sounding even moderately inept or unprepared for the task at hand, her performance translates as commanding, assertive and full of swagger from start to finish.

In this latest release, Todd not only flexes some serious lyrical muscle through her ever-evolving poetry – which we find at its most carefree in “Window Shopping” – but maximizes her melodic strengths as well in a vocal showcase that any serious pop fan should take a peek at this October. Both the song itself and its music video are well-produced and efficiently mixed with a heavy focus on the captivating lead vocal, but I don’t think that industrial polish has anything to do with why this material shines as brightly as it does. Make no mistake about it; Lexi Todd is still finding her signature sound, but there’s a certain fierceness to her approach here that is quite indicative of a songwriter who knows what she wants her music to be. Her moxie deserves a big round of applause, as does her brilliant arrangement of rhythm and rhyme in this opulent fall ballad.