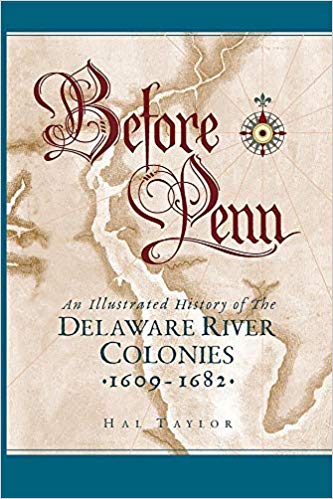 “Before Penn” provides the little known but fascinating history of the European settlement of the Delaware River Valley prior to the founding of Philadelphia by William Penn.

The background tells of a legendary visit to North America by Irish monk St. Brendan in the seventh century and continues with a litany of European explorers searching for a short cut through the North American continent that will lead to the treasures of the Far East. During the process, abundant natural resources are discovered, leading to competition among major powers.

The foremost of these, The Dutch, grab a large region of the Northeast, including the Delaware River Valley, which they name New Netherland, and establish an extremely lucrative fur trade with the Native Americans. Eventually, disgruntled Dutch businessmen partner with Swedish backers to create a rival venture on the Delaware called New Sweden. The two nations squabble continuously over control of the fur trade with the Indians leading to the construction of forts intended to to outflank each other in a territorial chess match. As command of the Delaware and it’s resources swings back and forth, it is made even more complex when a separatist group from New England attempts to encroach on the fur trade. It comes to an end when the Dutch launch a bloodless takeover of New Sweden.

There are many unique personalities and events involved in this engrossing narrative that include Johan Printz, bombastic governor of New Sweden, and his counterpart from New Netherland, the irascible Peter Stuyvesant; the first brewer on the Delaware, and possibly the finest name-Foppe Outhout; Alexander d’Hinyossa, who took corruption to a whole new level; and the issue of the Penn and Calvert property dispute that continued well into the twentieth century. Punctuated by over eighty original color and black & white illustrations, Before Penn is a comprehensive overview of an important region of the U.S. whose history has been largely underserved.