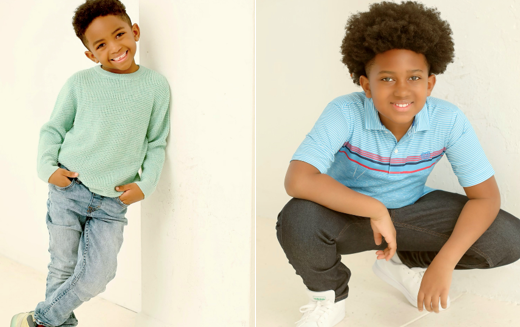 Truly meaningful performing talents under twelve-years old are rare. Rehearsals, memorizing scripts, learning your marks, and handling the assorted other minor rigors of performance are stringent enough tasks that young children are unsurprisingly overwhelmed. It is the precocious who thrive and brothers Lance-Carter Obadiaru and Cree-Silver Corley fit that particular bill.

The now eleven year old sixth grader Lance began his professional life three years ago. Manager T. Theresa Bastien and Adunni Rose Talent Agency have taken a slow and steady approach to building Lance’s career, however, and are seemingly focused more on television appearances than anything else at the moment. It isn’t the whole story, of course, as they are likely open to anything that’s a good fit and gives the brothers an opportunity to grow.

Lance has a forthcoming role in a major Showtime production that should prove pivotal. It isn’t a question of appeal or talent at this point, Lance has plenty of both, but rather the right opportunities. Lance and his brother are both aiming for long careers in television and film rather than fly by night star turns in their youth and making the right moves is paramount.

The aforementioned tandem of Bastien and Adunni Rose are the perfect captains for steering this ship. Bastien and the agency are experienced working with child performers and placing a high priority in promoting their personal as well as professional development. Artistic achievements aside, Lance and Cree are children, before anything else, and encouraged to be. Such encouragement likewise provides fertile ground for their art to flourish.

Cree, Lance’s younger brother, is a six year with a recurring role on the television series The Wilson’s. He’s set to star, as well, in a major upcoming theatrical production of the film Norma Rae that is a bold opportunity for a very young and gifted child to show he belongs on stage with other talents decades his senior. Cree and Lance are city kids, through and through, hailing from Jamaica, Queens and full of the zest for life that all healthy young boys know.

It comes through in their accompanying press photos. It’s no shock that both boys are generating considerable interest as print models – Lance and Cree alike are blessed with a bright-eyed, fresh faced appearance, wholly natural, that pierces you with its innocence. It inspires trust and warmth. This sort of natural and effortless charisma is the sort of ephemeral magic careers are built on.

It’s magic that, in this instance, is built to last. It is there in the quantifiable moves they’ve made so far such as the parts they’ve secured and past roles. It’s there in the adults overseeing their career direction right now. You can see it, as well, even in their faces, the same starry eyed joy in front of camera that speaks of deeper, unnamable passions within. They have plenty of interests, they are curious and extremely bright young men, but these are born performers for life. We will be hearing more about Lance-Carter Obadiaru and Cree-Silver Corley for many, many more years to come.