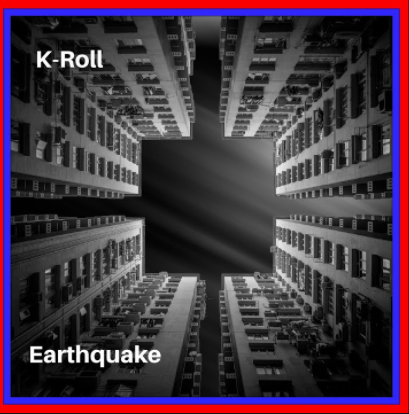 Based out of South Carolina, Kevin Rollinson, AKA K-Roll, is a Recording Artist/Comedian/Actor. His story is unique as is his approach to his career in the arts. His new single, “Earthquake,” effectively displays all of his facets as a performer. While the track doesn’t necessarily straddle genres, it does bring something a little different to the Hip Hop genre. K-Roll represents himself as he likely views his persona on the track and it stands out as a result.

“Earthquake,” could be considered, something of a novelty track in certain circles. It also features Quesh, $DOE$, and Nick Scott. There’s a lot going on in the piece, though most of the duration allows for a singular focus. Although there are admittedly several cliches visited throughout “Earthquake,” it inevitably leaves its own footprint. Of course, conceptually speaking, “Earthquake,” isn’t the first of its kind, it is however, noteworthy for its charming lack of self-awareness.

With K-Roll’s comedy background, we aren’t entirely sure if we’re supposed to take “Earthquake,” seriously. Admittedly, the ambiguity is part of the fun. The lyrics are highly suggestive, and the title seems to be a metaphor for seismically gluteal portions, if you will. All of the performers seem to have an agenda in mind, and somehow those agendas find a sense of compatibility, albeit a chaotic one. Ideally, you’ll want to revisit the song, simply to hear what you might have missed, the first time.

“Earthquake” is something of an R Rated affair. It offers a plentitude of double entendres, that aren’t always particularly subtle. For some, it will seem like a rehash of the same tired subject matter, we have heard for years. Others, will say that such adult oriented simplicity will never go out of style. Either way, “Earthquake,” is destined to raise a few eyebrows.

The production on “Earthquake” is more than passable. You’ll likely notice a few misalignments, and mixing issues, but the performances are spirited enough to conceal it. As for the performances themselves, the song seems to have been recorded in an elevator, with the various artists doing gymnastics routines. That’s not to say the track becomes a mess, because as previously mentioned it somehow unfolds in a highly cohesive fashion. The most remarkable thing about “Earthquake” is how much they fit into the 2:58, run time.

Discounting personal tastes, K-Roll has presented something stylistically original here. He seems to consider himself something of a renaissance showman, and he uses his outside endeavors to bring diversity to his work. The jury is out on whether his involvement in something like “Earthquake,” or more appropriately his creation of, will pay off in the long run. K-Roll certainly seems well adept at identifying opportunities for himself, and successfully seizing them. One thing is for certain, “Earthquake,” was written and recorded to shake things up, and K-Roll wouldn’t have intended anything less.

The music of K-Roll has been heard all over the world in partnership with the radio plugging services offered by Musik and Film Radio Promotions Division.  Learn more https://musikandfilm.com