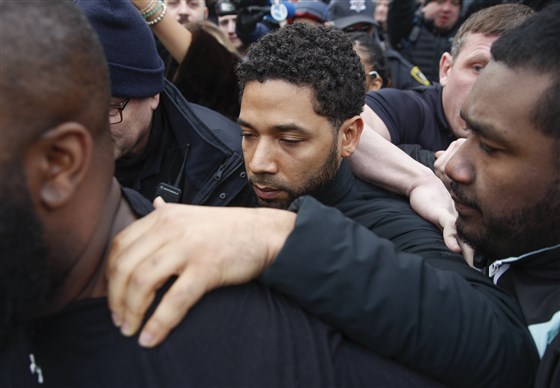 Embattled former Empire TV series actor Jussie Smollett has been indicted by a Chicago special prosecutor for allegedly staging a hate-crime attack in January 2019 which touched off a firestorm of controversy.  Smollett, 37, returned to his Stteeterville condominium in the early morning hours of January 29 of last year, with a noose wrapped around his neck.  The actor told his manager and responding police that two unknown assailants, wearing Trump “MAGA” hats and hurling homophobic slurs, had called him by name, beaten him severely, poured bleach on his face, and placed a noose on his neck.  Smollett was taken to a local hospital where he was treated and released, and kept a scheduled concert appearance that weekend in Los Angeles, where he told the audience, “I’m the gay Tupac”.  Not long after garnering nationwide sympathy, skepticism began to set in about the details of Smollett’s story.  Detectives investigating the case discovered inconsistencies in the star’s account, and soon followed clues to two extras from Empire, Abo and Ola Osunairo, brothers who were picked up at O’Hare Airport.

The brothers were brought in for questioning, and eventually admitted their role in an allegedly staged attack on Smollett, for which they were paid $3,500 by the actor, detectives said.  The brothers told police they purchased rope, bleach, ski masks and red hats with funds furnished by Smollett and accosted him in the subzero polar vortex chill as per Smollett’s instructions.  Armed with this information and video evidence, detectives arrested Smollett for filing a false report and other charges, but the original case went awry after District Attorney Kim Foxx recused herself, citing potential conflicts of interest.  That recusal led to prosecutors dropping the case, in exchange for community service and forfeiture of his $10,000 bond.  That, however, wasn’t the end of the story.  In August, a special prosecutor was appointed to review the case, with an eye towards refiling new charges against Smollett in the wake of sustained outrage from the Illinois Prosecutors’ Bar Association (IPBA), the Chicago police, and the general public over Smollett’s perceived “celebrity justice” treatment.

The special prosecutor, Dan Webb, gathered new evidebce and subpoenaed Smollett’s Google records, including emails, Drive material, chats, and other communications in November, and later convened a grand jury, which returned the indictment on February 11.  The charges include six felony counts of disorderly conduct, alleging that Smollett made false reports to police about the alleged attack.  “The grand jury’s investigation revealed that Jussie Smollett planned and participated in a staged hate crime attack,” Webb said at a press confernce, “and thereafter made numerous false statements to Chicago Police Department officers on multiple occasions, reporting a heinous hate crime that he, in fact, knew had not occurred.”

Smollett is due in court on February 24, and if he is convicted of all charges, could be sentenced to 1 to 3 years in prison under Illinois law.  Smollett’s attorneys were unavailable for comment at press time.