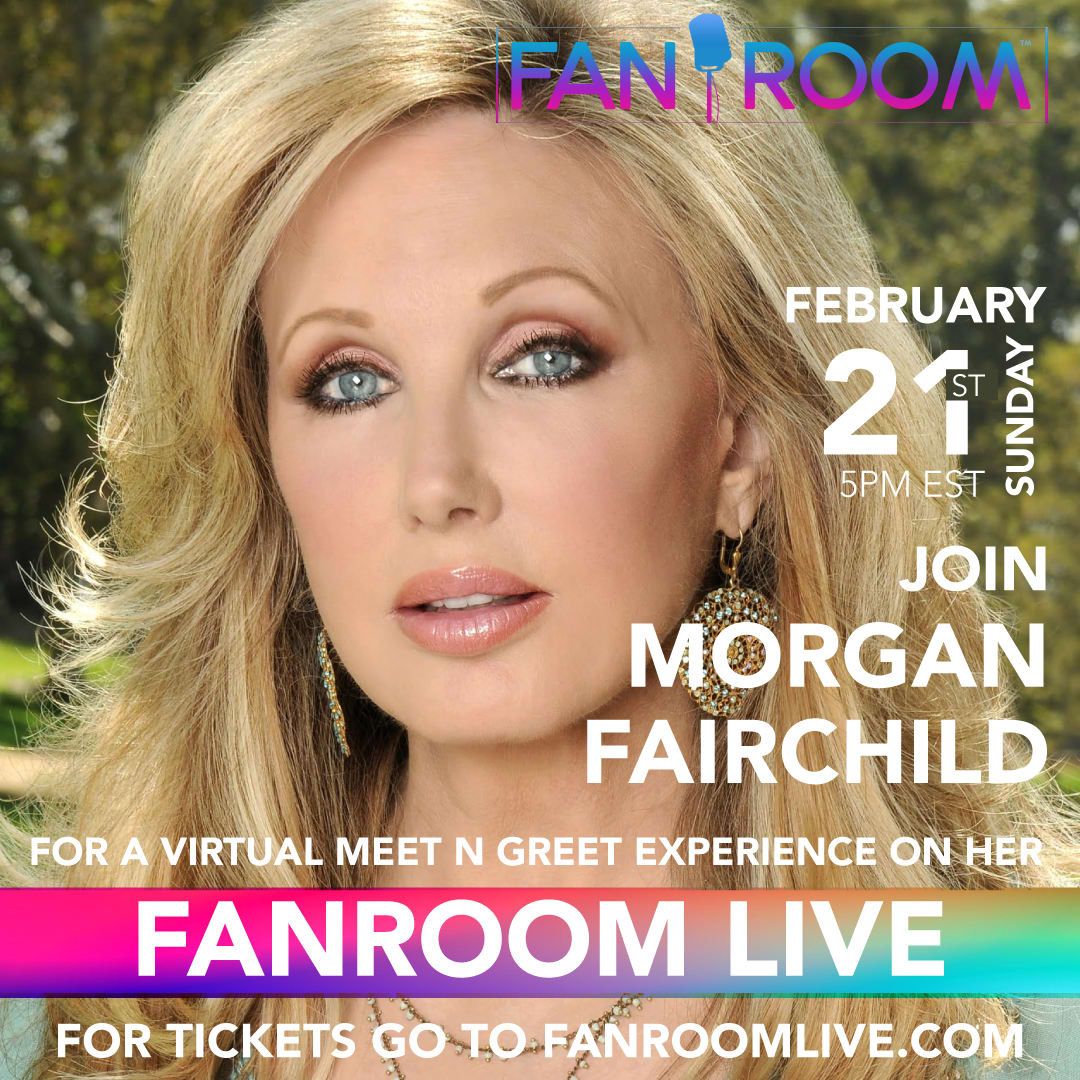 Join Morgan Fairchild for a virtual meet and greet on FanRoom Live on Sunday February 21st, 2021 at 5 PM EST.

Morgan Fairchild has defined the television version of the rich, sophisticated businesswoman who knows what she wants, and will do whatever it takes to get it. In 1973, Morgan decided to pursue a career in television; just 6 weeks after moving to New York, she landed the key role of Jennifer in the daytime soap opera Search For Tomorrow (1951); she stayed on until 1977.

Morgan moved to Los Angeles, where she originated the role of Jenna Wade on the wildly popular nighttime soap opera Dallas (1978) (Jenna was later portrayed by Priscilla Pressley). Morgan made numerous guest appearances on television series. She played Constance (Weldon) Carlyle in Flamingo Road (1980), and she was nominated for a Golden Globe for Best Actress; that was her breakout series that propelled her to stardom.

Morgan continued to perform in live theater, her acclaimed portrayal of Skye in the off-Broadway comedy “Geniuses” helped make it one of the “Top Ten Plays” of the year according to Time Magazine and the New York Times. Other stage appearances have included productions of “Goodbye Charlie” and “Gentlemen Prefer Blondes.” On television, she played the naughty Racine in the soap opera Paper Dolls (1984) in 1984. Later, she starred in the soap opera Falcon Crest (1981) from 1985-86, having made a niche for herself playing ambitious beauties. Morgan received an Emmy nomination for a special episode of Murphy Brown (1988).  With 153 film and television credits to her name, including Days of Our Lives,The Bold and the Beautiful, Fashion House, Friends, Barnaby Jones, Mork & Mindy, General Hospital, Just Shoot Me, Holy Man,  etc.,  Morgan Fairchild is the definition of the word Superstar.

The FanRoom Live platform helps actors, musicians, comedians, sports stars, and other popular figures engage and interact seamlessly with their supporters virtually. These sessions are always very interactive and more like a meet ’n’ greet and Q&A town-hall-style meetings.

FanRoom is the brilliant collaboration of an actor/producer, talent agent and celebrity event producer in response to the pandemic that stilled the entertainment industry. Fighting boredom, depression and isolation, the public is hungry for normalcy. Cedric the Entertainer, award-winning actor, producer, and comedian, Mich Faulkner, CEO of 123 Talent, and Jeff Krauss, President of event production and entertainment company IE Group, designed a new reality. They brought on Co-EP & host Chanel Omari (CO Productions), as well as, CO-EP and Co-Host, Jae Benjamin. Pooling their talents and resources, they created a solution for staying home and social distancing while getting an intimate entertainment fix for eager fans. Artists connect with fans in ways never possible before. FanRoom Live became an instant success. Previous guests of FanRoom Live include Cedric The Entertainer, George Lopez, D.L. Hughley, Brant Daugherty, Holland Roden, Kurt Angle, Jake The Snake Roberts, Richard Kline, and George Wayne the former Vanity Fair scribe. Up-coming talents who are set to be announced include Morgan Fairchild, Sean Kanan, and a returning Jake The Snake Roberts to give the platform the power to overcome current challenges.

Get your FanRoom Live tickets to meet Morgan Fairchild on Sunday, February 21st at 5 PM EST by going to  https://www.fanroomlive.com