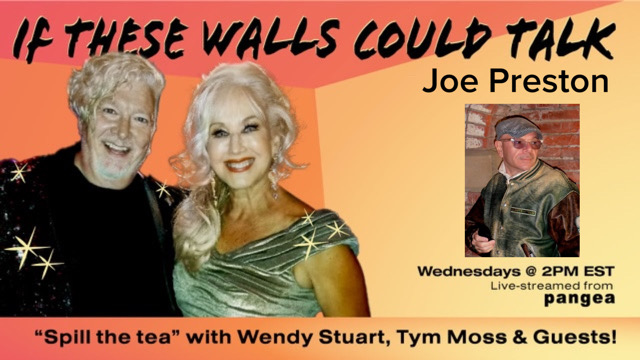 Joey Preston will be featured guest on “If These Walls Could Talk” with hosts Wendy Stuart and Tym Moss on Wednesday, September 29th,  2021 at 2 PM ET live from the infamous Pangea Restaurant.

Joey Preston is a lifetime native New Yorker as well as Executor to the Estate of his First Cousin and Godfather, Warhol Star, Jackie Curtis. After decades of supporting Jackie’s work and memory, Joey has emerged as a first-time author who reflects on his interpersonal and professional experiences as witnessed through his eyes and feelings of a close family member.

Joey has always spent his life in the support of Jackie, not only during their family and professional lives together, but also in the public sharing of Jackie’s memory through stage managing, directing, producing for stage and film, speaking engagements, as well as Associate Producer of the major film documentary, “Superstar In A Housedress – The Life and Legend of Jackie Curtis”.

As keeper of the legal flame, Joey continues to represent Jackie’s literary plays and poetry after three and a half decades since Jackie’s death. Jackie’s archival files are now permanently available for review at the LGBT Center in New York City for posterity and future generations to enjoy. However, the personal accounts contained herein between Jackie, Joey, our family and invited memoir contributors are available only in the context of this book.

Joey’s desire is to have his curious readers finally explore the alternate facet of Jackie’s family and home-life through the writer’s vision and his carefully curated invited memoir guests. Although there have been many colorful excerpts, passages and personal interviews written of Jackie’s theatrical life, this book aims to heighten the reader’s awareness of Jackie as a family member.

Joey has enjoyed a lifetime of his own personal professional endeavors in the fields of Graphic Design, Media and Stage Entertainment and Retail Sales, which have included his own brick and mortar retail shops, e-commerce and trade shows. He proudly maintains his residence in New York City and looks to further his interest in various media projects and live entertainment in the future.

Watch Joey Preston LIVE on YouTube on If These Walls Could Talk at Wendy Stuart TV here: