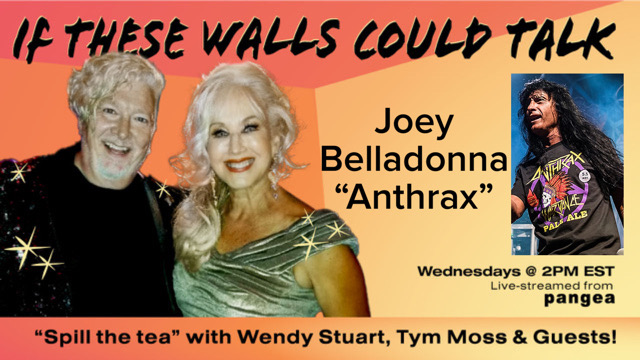 Who else but hosts Wendy Stuart and Tym Moss could “spill the tea “on their weekly show “If These Walls Could Talk” live from Pangea Restaurant on the Lower Eastside of NYC, with their unique style of honest, and emotional interviews, sharing the fascinating backstory of celebrities, entertainers, recording artists, writers and artists and bringing their audience along for a fantastic  ride.

Joey Belladonna from Super Thrash Metal Group Anthrax will be a featured guest on “If These Walls Could Talk” with hosts Wendy Stuart and Tym Moss on Wednesday, November 24th, 2021 at 2 PM ET live from the infamous Pangea Restaurant.

Joey Belladonna is an American musician, best known as the vocalist for thrash metal band Anthrax. He is also the vocalist and drummer of the cover band Chief Big Way. Belladonna has six Grammy Award nominations and is known for his wild, energetic stage behavior, and tenor vocal range.

Watch Joey Belladonna on “If These Walls Could Talk” with hosts Wendy Stuart and Tym Moss on YouTube here: