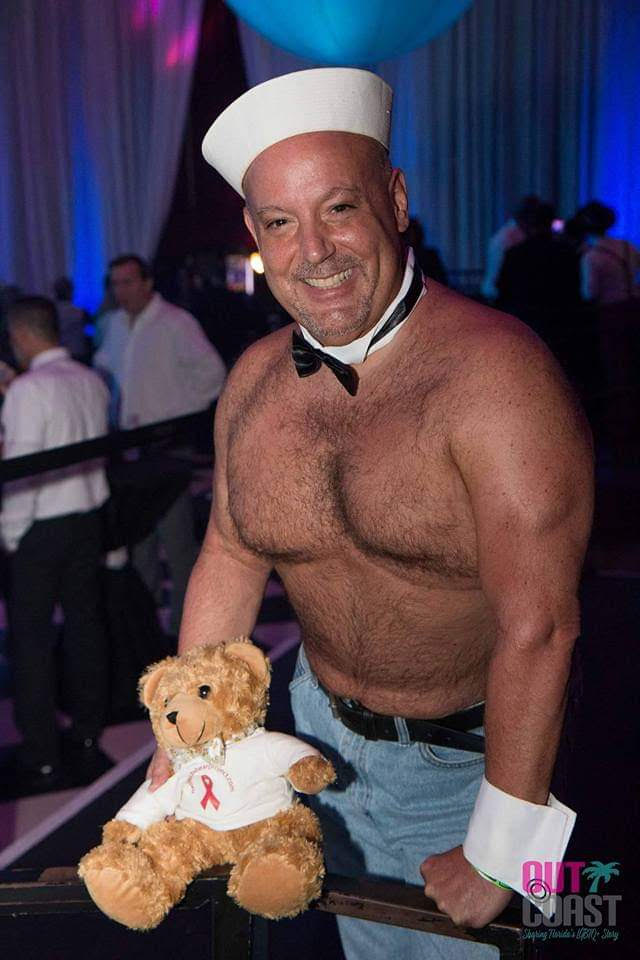 For many years, hunky, well-known papa bear Joe Mannetti has been a part of the gay landscape on both coasts, as an advocate, stage, TV and adult film actor, and holder of several major titles in the Bear community.  His advocacy work over the years includes HIV testing and mental health counseling (he is the recipient of the MCC Church’s Justice Love Award), and he’s used his platform to do fundraising for a variety of LGBTQ service groups in California and New York.  Community service has always been a priority for Mannetti.  “I began my volunteer and fundraising work when I lived in Los Angeles. I had moved there from New York, where I grew up, in 1986. I was an aspiring actor in a new town. I was coming out as a Gay man, and I wanted to connect with and support our LGBT communities,” Mannetti tells The Hollywood Digest. “I was pleased to discover that there were so many creative and talented individuals who were involved with very rewarding work supporting diverse populations. I began reaching out volunteering and working with them. I observed. I got involved. I listened, and I learned. It was the beginning of a very exciting journey.”  Moving forward with outreach work continued to be a hallmark of Mannetti’s career, in which he gravitates towards street-level, organic agencies.  “I found that some employ an approach that actually does that without being judgmental while others do not. Hypocrisy and a corporatized establishment approach can be found within LGBT nonprofits just as much as anyplace else. I am a grassroots guy who prefers a grassroots approach to outreach. So, I focus on the organizations that do the same,” he notes.

Throughout his artistic journey, Mannetti has always nurtured a rebellious edge, preferring to be iconoclastic, instead of marching in lockstep with everyone else.  Typical of his independent approach, Mannetti ignited controversy by acting and appearing alongside Buck Angel, a trans man who has won the AVN’s Transsexual Performer Of The Year award.  Angel’s presence on the gay, erotic film scebe stirred much criticism, but Mannetti supported him openly.  “I was championing the rights of Transgender people before the majority of others were doing it. People back then recognized that about me. That is how I wound up working with Buck Angel back when others were wrongfully shunning him because he is a proud Transgender man,” Mannetti declares.  “Back in the early 2000s, while I lived in LA, a friend approached me. I had just done a show at a club with cult performer Selene Luna. She told me that she knew that I was actively posing for nude pin-up pictorials and performing in porn at the time, and she had a friend looking for someone to pose with him. She told me that the issue was that he is a Transgender man, and people were shunning him because of it. She knew that I supported diversity, a sex positive environment, and I hated seeing anyone discriminated against or bullied. She asked me if I would freak out posing with a Transgender man. I told her that I would be delighted to meet and pose with him.  I did!”

Angel was profusely thankful for Mannetti’s help, writing, “I have to say you were one of the very few men who were comfortable shooting with me despite the backlash from the gay men’s community. That I was not a man and that is was gross. But we proved them wrong and now so many gay men love transmen!! It’s exciting for me to see my work make a positive difference in the world. That sex is a positive thing in many Trans men’s life’s and that we should celebrate it, not hide it. Love to you my friend.”  That encomium characterizes Mannetti’s fierce self-determination.  “I am still very much a man who takes pride in his independence. I am not affiliated with any groups, LGBT or otherwise. My brand is me. It is not tied to any specific location,” he states, “I have performed and brought my work to the west and east coasts as well as the north and the south. Joe Mannetti is Joe Mannetti regardless of the location or the audience he stands in front of within any communities. Being a part of a group or identified with one particular area works for some people, and that’s fine.”

Recently, Mannetti suffered a hard blow to that independence last winter, when he suffered severe lower back injuries in a fall.  As he began his long convalescence, the ongoing COVID-19 pandemic unleashed itself on the world, complicating his recovery.  Taking stock of things, Mannetti used the lockdown as a time for re-evaluation and introspection.  “They say that most people have to hit bottom before they embrace the need to reassess and redirect their lives,” he muses. “My experience of this lockdown is that the fraudulence, the hypocrisy, the corruption, and the ineptitude that so many of us were aware of but did nothing about cannot be ignored any longer.”  Now Mannetti is looking forward to the post-COVID future, even as his own life returns to normal as well.   Semi-retirement in Florida is on the horizon, but there will be more projects in the pipeline nonetheless.  “I am looking forward to new experiences in a new location once it is safe to travel again. I don’t rule anything out. I am a loner by nature,” Mannteei emphasizes, “Outside of the shows and events that I have been involved with throughout my life, I choose to spend the majority of my time by myself. I enjoy my solitude. I think that the creative process takes place mostly in our solitary moments.”

That’s not to say he will go quietly into the night: Mannetti was recently approached by a producer with whom he’d worked in the past, and soon a biopic portraying his colorful life will become a reality.  “I was so overwhelmed and amazed by that offer,” Mannetti rhapsodizes, “and I can’t wait to begin that process.”  As a bear on the hunt for new ideas ad new ways of reaching a changed gay community, Mannetti is ready to adapt to a different environment.  “I have learned to focus on the work, the people, and the lifestyle that allows me to cling to what I value with the people of substance I value. We have quite a few leaders out there. They will take us to a better place. I am looking forward to seeing that happen!”  You can find Joe Mannetti on Facebook, and wherever there’s a real need in the gay community.