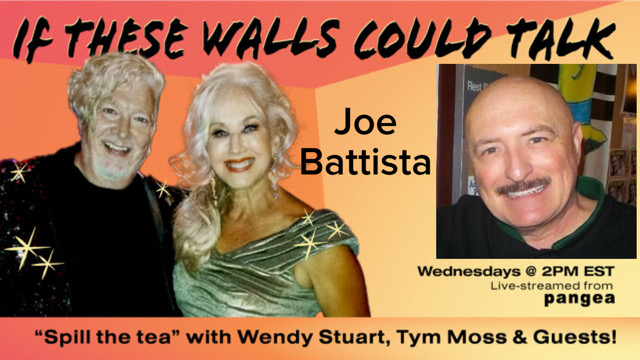 Joe Battista will be a featured guest on “If These Walls Could Talk” with hosts Wendy Stuart and Tym Moss on Wednesday, December 29th, 2021 at 2 PM ET live from the infamous Pangea Restaurant.

Joe Battista (Director/Producer/Actor/Photographer/Graphic Artist/Videographer) is the Artistic Director of the Historic 13th Street Repertory Theater, and a member of Actor’s Equity and the Dramatist Guild. Graduate of The American Academy of Dramatic Arts who studied with William Hickey, Stephen Strimpbell, Uta Hagen, Eve Collier, Hugh Whitfield, Jack Melanos, Paul J. Curtis, and Gates Mcfadden. At the age of 21, he was hired as a Director at the Bucks County Playhouse but soon realized that New York theatre was his first love and soon was directing experimental theater off-Broadway. Joe also is a professional photographer and has worked for the Ford, Elite, Zoli, Wilhelmina, and Legends agencies. He just finished a film “Black Magic” an Onur Tukel film shot in NYC. Joe has been involved in over 100 plays and musicals and was the lead guitarist for the bands, Razor Engine and Electric Landlady. Recent NY Theatre: “Milkman’s Sister” with Robert Funaro, “Women Behind Bars” starring Amy Stiller, an original play “Before We’re Gone”, written by Jerry Small, produced by Bahr Productions, a film production company from Los Angeles, California, “A Life In The Rye” at the Theater for the New City, Production Consultant/Graphics Designer for “Dress of Fire” with Austen Pendleton and Angelica Page; also an experimental project “Uno Momento”, and has directed for Emmy Award-winning Seth Freeman. Presently “Help A Handicapped God Trot Across The Universe” an original play by playwright Thomas Walters, Birmingham, England. And November 2022 “Cold Blooded” with Everett Quinton and Jenne Vath. All this and more to come with The Historic 13th Street Repertory Company. Favorite Quote: “Neurotics build castles in the sky, Psychotics live in them”.

Watch Joe Battista on “If These Walls Could Talk” with hosts Wendy Stuart and Tym Moss on YouTube here: