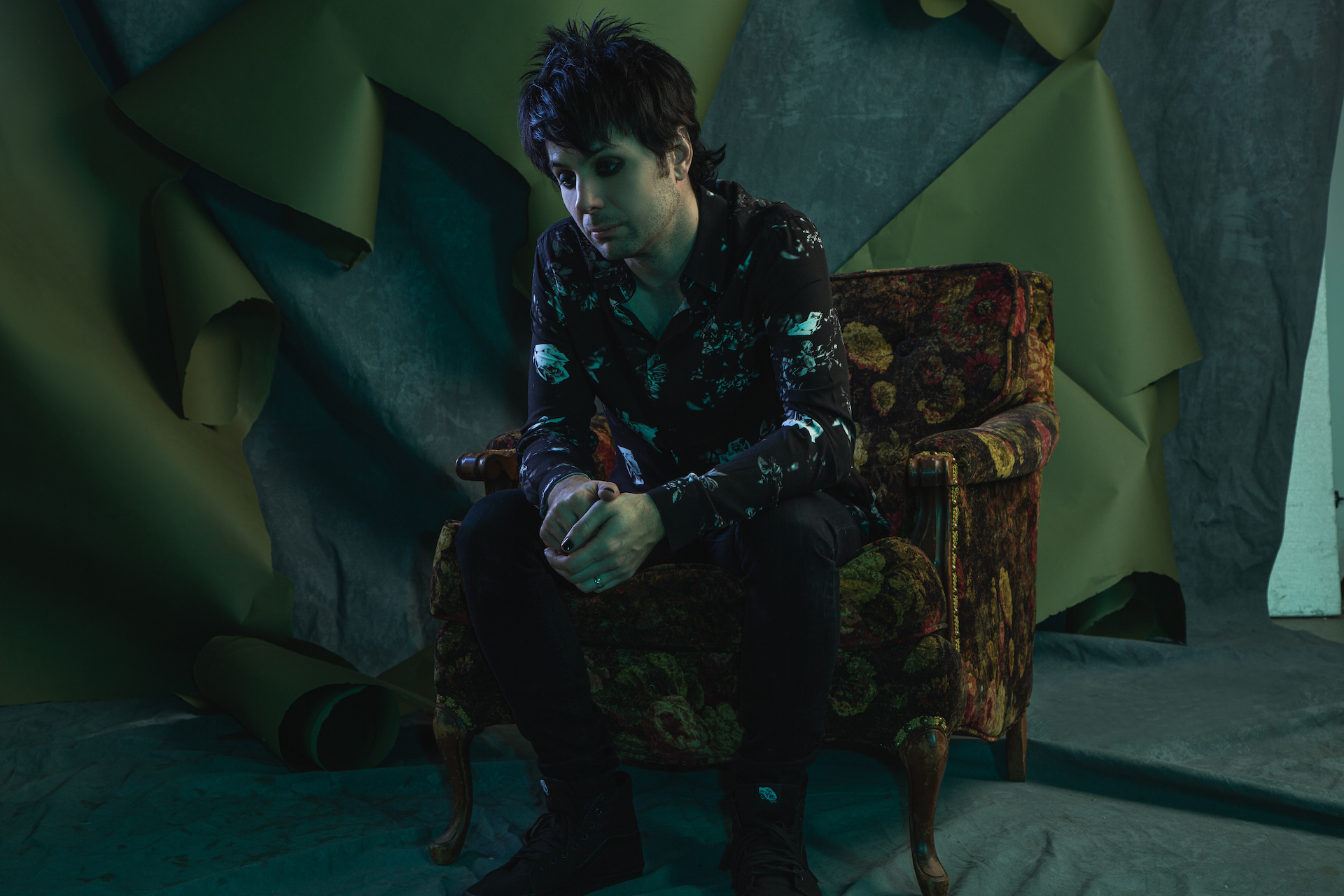 Jerad Finck, also known in the music industry as “BLAZAR”,is the mastermind behind “Cosmic Wire”, a holistic and futuristic multi-media company. What starts an adventure is a vision and single leap of faith. When the world shifts and the climate changes and we no longer have a holy passport to protect us, in steps Jerad with a crushing dedication leaving a trail of glitter behind. Like a diamond, he doesn’t ask to shine, he just does.

In the musical sense Jerad identifies with the name “BLAZAR” a fitting entity defined as an active galactic nucleus with a relativistic jet directed very nearly towards an observer. In the world of music it’s a collective of top power producers, artists and writers collaborating with Jerad and creating a dazzling, electronic barrage of music exquisitely sensational enough to jar any collective effervescence to their feet.

Cosmic Wire “specializes in protecting and monetizing the world’s most valuable IP, traversing the now trillion-dollar blockchain industry since its 300% market increase from 2019-2020. Understanding the potential of NFTs to enable artists to sell and own their work directly, Cosmic Wire is focused on fair agreements, direct rewards, and downstream residuals and payments via their proprietary Licensing and Publishing model.“

Cosmic Wire recently collaborated with iconic rock n’ roll artist Ruby Mazur and Holle Fine Art Gallery in Maui to produce the first hybrid canvas and NFT art show in Hawaiian history wielding the famous “Mouth and Tongue” artwork first used by the Rolling Stones on the record sleeve of their album, “Tumbling Dice.” The artwork created by Mazur is an iconic piece of art in rock n’ roll history and is now celebrating its 50th anniversary. The NFTs were displayed side-by-side their canvas counterparts and on the very first night of the first exhibit in Hawaiian history, the NFT was sold for $1.1 million becoming one of the highest priced NFTs ever sold.

Jerad Finck joyfully agreed to have a conversation regarding NFTs, Cosmic Wire, Ruby Mazur, BLAZAR, and whatever else came up…..

How did you first get into NFTs?

I think it was from Scott Page (saxophonist from Pink Floyd), we were talking about it. Cosmic Wire originally came out as a record label and influencer group network. We had a lot of podcasts, celebrities, music and writers, and we were already kind of doing NFTs…only NFTs didn’t exist yet. Then Scott explained what he was doing with the space.  We developed this crazy synergy together, and just started driving around in his car pitching people on the idea and it really just started taking off. Then it became this monster that it is now. It was all a super organic phenomena that neither one of us prepared for. Then we began chasing the rabbit down the hole and developed our own proprietary system surrounding the licensing and publishing space combining it with NFTS and empowering creators in a way that has never been done before. Scott has been with me every step of the way literally with every client and every kind of development. He then introduce me with Dennis D’Amico and the three of us become the spearhead for the company. The other side of Cosmic Wire, the record label, was already functioning. We had our label, our artists, our booking agencies and that stuff has just been doing its thing. That’s what cosmic was, and now it’s this massive conglomerate. We have three companies inside of us now, and all of these partnerships. Vincent Castellucci, the founder of Harry Fox is now with us.  He brought Digitalmix into Cosmic Wire and he is heading up our synch and licensing division now, it’s insane.  We’ve also partnered with Performix Capital, and now wholly own the only public Enterprise version of Ncoded, the Cybersecurity firm that works with the Department of Defense. The idea being that we can create the NFTS internally with our in-house art teams, currently led by Jim Evans and Digger Mesch, license and publish the creation, disseminate it via our marketing engine and allow the creator to own their IP, entirely.  I am an artist at my core, and wanted to make sure this company functioned different.  Every aspect of Cosmic Wire is on a back end royalty system, from publicists, to legal, to marketing, to production and distribution.  For the first time ever, everyone from creator to disseminator, is on the same side of the table.

How did you connect with artist Ruby Mazur?

I was introduced to Ruby from Dennis D’Amico that works in our company, and who has known Ruby for years. He told me Ruby‘s story and I was determined to meet him. I loved his story because I am an artist first and foremost and I have had terrible predatorial deals with labels both Major and Indie for the last 10 years of my life and I totally understand creators getting screwed. With Cosmic Wire, the main thing we  we wanted to do was to empower artists. So, when I heard the story about Ruby, I knew we had to go meet him and help him get his story known, and that was it.

So you met Ruby, saw his collection and then……

Oh my gosh, I fell in love with his work instantly… I was totally blown away. He is one of the most inspiring people I’ve ever met. I didn’t even know his cancer story until he dropped that live at me during the event. So, I was in shock.

Then what kind of emotional high did you experience when you sold his first NFT for 1.1 million dollars? I mean how did that even happen? Describe the whole scenario?

We started the auction and we had our team set up our ads network blasting fans of art, music, all the normal kind of targeting stuff.  Cosmic Wire also has a large stable of in-house influencers so we had them spreading the message all over the web. Then, during the auction, we just had someone call in an offer for 1.1 million for one of them. For me I almost started crying because we had been working so hard to complete it, and when doing something that’s never really been done before, it’s always scary. To see it work at that level kind of floored us all. We just found out we are now the 12th highest selling NFT that’s ever been sold. It was the first NFT Exhibit in Hawaii’s history. No one has done this before. We built custom frames around these TVs to hang on walls to show people what NFTs are because everyone is talking about NFTs in this digital space. So I thought why not bring this digital space here into the analog world and let people interact with us. We could let people see it, feel it, touch it. So everything that we were doing was new. We went out on our own platform and built the whole thing from the ground up. Even how we were selling the NFTs online, we built that system as well. Cosmic Wire doesn’t use auction sites, because we are focused on a direct to consumer model for creators. So, we just branded it and ran it independently without all the noise. I think the biggest reason this all worked so well, is Ruby is just so magnetic.

I’m thinking that you are the brainchild of Cosmic Wire?

Yes, it is my company. I’m a producer/artist. The whole thing at the start was a record label and I was producing every artist on the label and co-writing all of the music. I was collaborating in all of their remixes and that was kind of the way the company was built. I do marketing for major labels, so I just integrated a lot of that team into Cosmic Wire on my own. I had the support of all the labels I had been working with forever and I put it all under one umbrella to do this thing. It grew from there.

And you had this vision because?

I was tired of being screwed, it’s not a new story, in fact it is the regular story and I just wanted to create a better way. I built this as a place where people could come and control their IP in a community of support and cross-promotion. We don’t charge anyone anything for being a part of us. Everyone is incentivized by royalties, so it puts everyone at the table for the first time ever. We don’t charge any of our artists anything. We do all of the mixing, production and even all of the legal. All of our attorneys are on a royalty system so you can actually talk to them and they don’t send you crazy bills for telling you about their dog. It was just built differently and that was the vision from the start. It was to create this kind of community where others could come and create and be supported by a team that was incentivized to make their stuff successful. That is the whole premise of the company. Ruby was exactly that, he’s had his work stolen and he didn’t have the right people around him to protect him. He was exactly what I built this for. To authenticate and protect people, exactly like Ruby. Now he has an entire infrastructure around him.

That is a brilliant concept.

It’s cool and it’s scary because it’s never been done. Now that we saw this big one, it’s served as a proof of concept for us. It does kind of turn the entertainment industry upside down. We’re showing a better way.