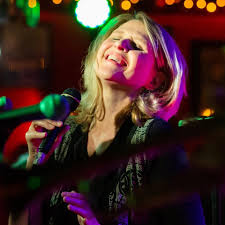 Gorgeous piano keys come streaming through the air against a backdrop of a gentle percussion as Jennifer Truesdale’s “My Life,” the closing number on her new album Through the Circle, begins to play, but it isn’t until we get a glimpse of Truesdale’s lead vocal that we get to experience the song’s flashpoint of catharsis in all of its emotive glory. In this track, and all ten that are found on Through the Circle, we’re invited into Truesdale’s heart, and more often than not, to enter a place where emotion and music are one in the same. Whether it be her covers of “Love the One You’re With” and “Have You Ever Seen the Rain” or her original material in “My Life” and the breathtaking ballad “Moving Mountains,” this artist doesn’t refrain from bearing it all behind the microphone, and despite the pop sensibilities that her new LP contains, I don’t get the impression that it was designed to fit inside of a commercialized box at all whatsoever; in fact, quite the contrary.

Jennifer Truesdale is one heck of a singer, and when she’s crooning in a bluesy tune like “River to Nowhere,” I think we’re able to enjoy her melodic depth at its most unrestrained. Don’t get me wrong; she’s an absolute ace in the jazz-laden “Sunrise” and folky “We Will Not Be Forgotten,” but there’s something really exceptional about the way she attacks the verses in “River to Nowhere” that stuck with me long after my first sit-down session with Through the Circle.

“Sunrise” emphasizes her credibility as a lyricist more than any other track here, and yet I feel like its true centerpiece is its slow-churning rhythm, which produces a hypnotic background which, at times, is even more communicative than Truesdale’s words are. Through the Circle is riddled with a lot of dualities, but even at its most contrasting, the substance of the material here is stunningly personal and unguarded. It’s not the most revolutionary debut I’ve listened to in 2019, but this record definitely qualifies for all of the accolades that it’s been picking up lately.

From the moment that the guitar spikes “I Need You Tonight” with an unmatched swagger to the second “My Life” concludes our adventure with Jennifer Truesdale, her new album Through the Circle is an easily accessible chameleon of a record that seems to have a song to suit almost any mood. Truesdale puts on a virtuosic performance for vocal pop fans everywhere in songs like “Thinking of You,” the rip-roaring “Daydreaming” and chilling “River to Nowhere,” and although she has a tough time sticking to one stylistic bend over another here, I happen to see this attribute as being her best quality as a singer and songwriter. She’s telling us that she isn’t about to be pinned down by the standard parameters of pop subgenres; she wants to expand on a sound built exclusively on the back of her amazing vocal skills, and while it’s not the most conventional way to start a solo career, it’s inarguably a respectably bold move for any artist to make in 2019.