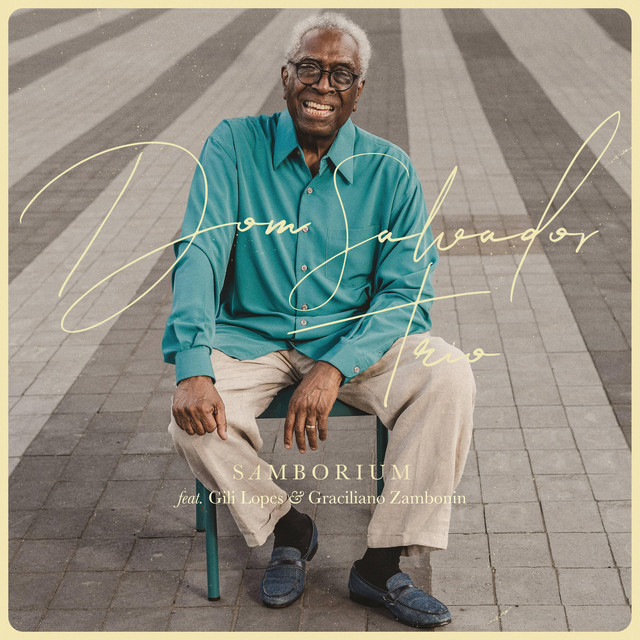 Dom Salvador’s musical journey has consumed much of his adult life and made him a legend. One of the earliest trailblazers in samba jazz dating back to the 1960’s, Salvador is in his early 80’s now and shows no signs of creative torpor. His band the Dom Salvador features two other superb musicians working with him. Drummer Graciliano Zambonin and bass player Gili Lopes, both Brazilian born and now living and working in New York City, are mainstays of the city’s jazz scene and top-flight virtuosos of their respective instruments.

They also understand how to play as an unit, a pre-requisite for anyone working with Salvador. This new ten song collection Samborium highlights their contributions to Salvador’s art, but the spotlight falls on Salvador much of the time. The album is better for it. Salvador defies his age during each performance and plays like a musician at the peak of his powers.

Superlative interplay is the hallmark of this collection. It is obvious from the first song onward. “Upper Manhattan Medical Group” has an irrepressible bounce thanks to Salvador’s piano playing and Zambonin’s drums while Lopes lays down an unshakable bottom end. It’s an ideal choice for the album opener as it introduces listeners, longtime fans and newcomers alike, to the essential template that powers much of the release.

“Monk’s Mood” is a loving and inspired nod to jazz legend Thelonious Monk. Salvador and his bandmates do an excellent job approximating Monk’s gargantuan creativity in a condensed setting. It isn’t difficult to hear his influence permeating each of Samborium’s ten songs, but his individuality is always obvious. He takes his music into places Monk would have not ventured. “Dedication” is another highlight. The gorgeous melodies Salvador invokes are worth the price of purchase alone while Lopes and Zambonin supply crucial underpinning that strengthens the song’s impact. It is full of passion and affection. Hearing this pianist fully inhabit a song such as this is an listening experience all true lovers of music will enjoy.

“Gafierira” begins with a classic count-in before the trio launches into the song. It’s a life-affirming piece sparkling from the first passage to last. Salvador executes an assortment of runs that sound like a man 50 years younger and his energy never wanes. The trio navigates through several hairpin tempo changes with utter confidence. The penultimate cut “Samborio” is rife with similar changes in direction and tempo. Melody is again at the forefront of everything they do, especially Salvador, but Zambonin distinguishes himself with powerful drumming.

The album’s production bears mentioning. It captures each nuance in Samborium’s ten performances without ever focusing on one musician above all others. This is not a glorified solo vehicle. The finale “Criss Cross” makes this clear. The playful and skilled performance veers from the joyous into the lyrical without batting an eye and each of the song’s components are fine tuned for maximum effect. Dom Salvador’s trio has recorded one of the best jazz albums in recent memory and we can only hope they will continue working together.