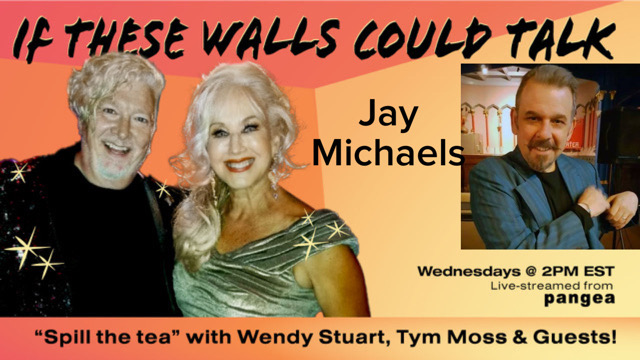 Jay Michaels will be a featured guest on “If These Walls Could Talk” with hosts Wendy Stuart and Tym Moss on Wednesday, February 16th, 2022 at 2 PM ET live from the infamous Pangea Restaurant.

Jay Michaels is a producer/executive with a specialty in communications and promotion. He has been part of the independent theater and film movement since 1977 and was part of Lincoln Center’s tribute to Caffe Cino and the original off-off Broadway movement in 1985. Before becoming an entrepreneur, he worked as an actor (stage and film) and director (off-Broadway) for many years, garnering accolades for helming new plays and musicals and a wildly successful series of Shakespeare plays sporting unique production schemes.

He began as a member of the production staff for Hard Times, 1984, and Romulus Linney’s Holy Ghosts at the Joyce Theater’s American Theater series, which won a 1986 Drama Desk Award. He also served on the production staff of events featuring Eliot Feld, Meredith Monk, Pilobolus, and the Nicholas Brothers. He went to serve as a national tour manager for Les Miserables, Cats, Oliver, and Edwin Drood and a production associate at PBS for the special series, Increase the Peace.

As a stage & film producer, he worked with David Canary, Tovah Feldshuh, George Morfogen at the Pearl Theater; Adrienne Shelly and the Missing Children Theater, to name a few, at venues including the Perry Street Theater, Theater Off-Park, The Wild Project, LaMama, American Theater of Actors, and much of Theatre Row. He directed the final company of LINE at the 13th Street Playhouse.

His career as a promotional executive began on Broadway with Guys & Dolls (1992) and continued with Damn Yankees (1994), The Vagina Monologues (2005) and recently with Beginnings (2017). He served on the promotional staff for The Daily News, producing events at Lincoln Center, Madison Square Garden, and Atlantic City. He served as copywriter for Bob Hope at Carnegie Hall featuring Skitch Henderson and his orchestra.

Watch Jay Michaels on “If These Walls Could Talk” with hosts Wendy Stuart and Tym Moss on YouTube here: