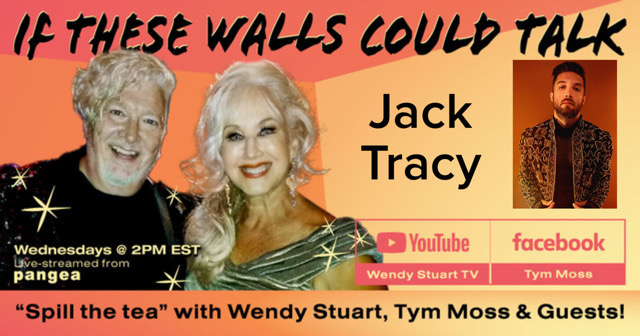 Jack Tracy will be a featured guest on “If These Walls Could Talk” with hosts Wendy Stuart and Tym Moss on Wednesday, August 10th, 2022 at 2 PM ET live from the infamous Pangea Restaurant.

Recording artist Jack Tracy–the self-proclaimed hypothetical white baby of Prince and Janet Jackson–is back on the music scene promoting his new album Gold, coming this fall, and preceding single None Tonight, which is available everywhere.  Jack, who is also known for his high-octane dance-heavy performances, also produces and stars in monthly residencies at The Stonewall Inn, Starr Bar and ICON Bar.  He is also the executive producer of Necessary Outlet Productions, which to date has spawned 3 podcasts, a feature film and several web series including the cult hit History.

Watch Jack Tracy on “If These Walls Could Talk” with hosts Wendy Stuart and Tym Moss on YouTube here: