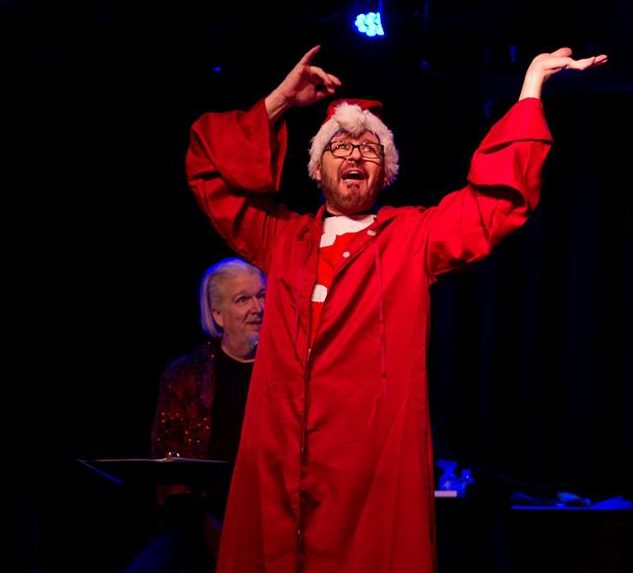 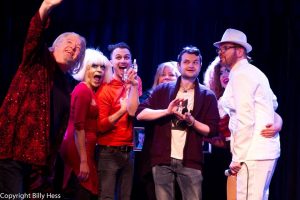 As the icy winds of the coming winter swirled around New York City, patrons of the Triad Theater on Manhattan’s Upper West Side climbed the steps to the warm, welcoming stage lights for accomplished comedian Ike Avelli’s annual Christmas show, Dear Santa, Define Good! Love, Ike. This December 8 diversion wrapped up a very busy time for the out, proud funnyman, who spent much of 2018 taking his act, 50 Shades Of Gay, to venues around the country, earning much critical acclaim. For this Yuletide side-splitter, however, Ike branched out in a different direction, poking fun at himself while trying to get off Santa Claus’ proverbial “naughty” list before December 25th. Ike, who wrote, produced, and starred in the show before a packed house, says it’s the culmination of a big year. “I’ve been on tour with 50 Shades, and my new book was published, so after this I’m gonna enjoy some quiet time”.
Ike’s hysterically funny volume, entitled A Year In The Life Of Ike Avelli…And It Ain’t Pretty, captures in microcosm the humble, but biting wit of the jokester, who started doing comedy in 2009 as a fill-in performer at a Christmas party. Encouraged by the audience’s laughter, Ike began doing stand-up from coast to coast, including such signature performances as Ike Avelli Is Coming To Town, The Book Of Ike, and Ike Avelli’s Day Off. As his fan following grew among both the straight and gay communities, Ike won awards for his work, among them the Get Out Magazine Comedian Of The Year for 2014, and this year’s Providence Fringe award for 50 Shades. Bringing it all together for his year-end finale, Ike enlisted the help of his friends and fellow artists, who helped make Dear Santa a rousing crowd-pleaser. 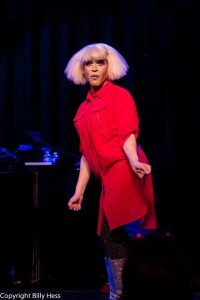 Hosted and narrated by radio/TV personality, stage and screen star Tym Moss, whose tongue-in-cheek delivery, combined with his impeccable singing voice, gave the show just the right spice of seasonal ethos to contrast Ike’s madcap sketches and costume changes. “I love working with Ike,” Tym tells Hollywood Digest. “We always have so much fin, and he is an amazing performer!” There were, of course, drag queens galore, as befits an Ike Avelli event, in the delightful persons of Shay D’ Pines, Angel Elektra (they’re a real-life drag-queen couple!), the voluptuously outrageous Sucia, and cameos by Viki Villainess and MargOH to round things out. The segments were suitably off-the-wall, as Ike dons everything from blue wigs to an elf-on-a-reindeer getup as he seeks to get on Mr. Claus’ good graces. There was even a “friendtervention” video skit, featuring an appearance by Rosemarie, Ike’s mom, that stole the show. 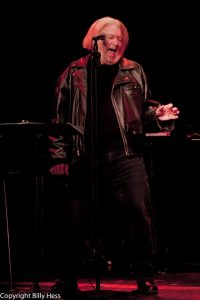 The one poignant moment in the program was the somber memorial to those Ike knew and worked with, that had departed this life in the past year. It was a loving tribute, with accompaniment in song by Ike and Tym, and pianist Frankie Vincent giving depth and feeling to it all with his stellar touch on the keys. 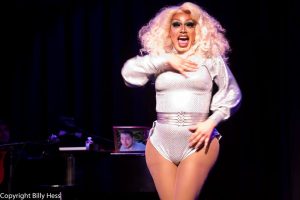 Volunteers from the audience got into the act, as did one of Ike’s friends. The show was sponsored by the law offices of Martin Davidoff, Uberlube, the Prager-Metis firm, and the tiny Mark De Alwus Salon, where the stars go to be made beautiful. Notables ion hand included bear icon Joe Mannetti, gay nightlife impresario Nick Lion, hairstylist extraordinaire Mark De Alwis, My Brothers House veterans’ charity founder Dr. Remolia Simpson, and celebrity photographer Billy Hess. After a brief winter hiatus to recharge, Ike will be back at it again, traveling to the Deep South next spring to kick off his 2019 tour. You can discover more about Ike’s (nice) career and schedule at http://www.ikeavelli.net. Just tell ‘em (naughty) Nathan sent you.